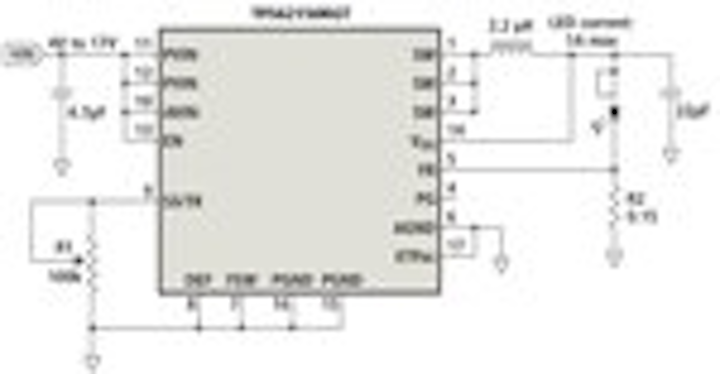 Portable equipment that uses LED-based solid-state lighting (SSL) requires an efficient drive circuit that prolongs battery life, as well as dimming options to adjust the light output for the ambient lighting conditions. LED dimming is necessary in applications such as the backlight for smart phones or portable GPS navigation systems to ensure an easily readable display in both bright sunlight and the dark of night. In flashlights, a user may deem longer battery life more important than delivering the most light possible. Either analog dimming or pulse-width-modulation (PWM) dimming can be used in such applications. By using an innovative approach to creating a reference voltage, an analog design can prove more efficient than PWM-based designs.

Both analog and PWM dimming techniques control the LED drive current, which is proportional to the light output. Analog dimming is simple, requires the least control overhead, and generally is more efficient than PWM dimming due to the lower forward voltage of the LEDs at lower drive currents.

Analog dimming, however, requires an analog voltage to be generated by a separate voltage reference – perhaps using the output of an RC filter on a square wave input signal, or from an expensive digital-to-analog converter (DAC). The circuit in Fig. 1 eliminates the complexity of these techniques to provide simple, cost-effective analog dimming based on varying a potentiometer. The total solution is an efficient, low-cost, low-component-count LED driver for a single high-current LED, such as Osram’s Golden Dragon, for use in small, battery-powered devices.

The circuit requires a voltage-regulating, synchronous, buck converter that provides output currents of up to 1A from up to a 17V source, such as the TPS62150. In Fig. 1, this buck converter regulates the current in the LED by using the feedback (FB) pin to control the voltage across the sense resistor R2. The FB voltage is controlled by a combination of a precision internal reference voltage, which typically is 0.8V, and an external input on the SS/TR (slow start and tracking) pin.

The SS/TR pin has a built-in current source of typically 2.5 μA. This is commonly used to charge a capacitor and create a smooth, linear ramp-up of the SS/TR pin voltage. In a typical buck converter, this then creates a linear and well-controlled ramp-up of the output voltage while reducing inrush current from the input supply. For this design, a resistor to ground produces a constant voltage at the SS/TR pin instead.

This circuit has very good efficiency, since the FB pin voltage is a relatively low value. That low voltage reduces the losses in the sense resistor, R2. In addition, the TPS62150 employs a power-save mode at light load currents to keep the efficiency high for the majority of the load range. Fig. 3 shows the efficiency of the circuit in Fig. 1 operating from a 12V input, and using TDK’s VLF3012ST-2R2 inductor in the switching output.

The efficiency of this circuit can be improved, but at the cost of circuit size. For example you could connect the FSW (switching frequency) control pin to the output voltage, which reduces the operating frequency, and/or select a different inductor with lower DCR (DC resistance) and/or better AC loss characteristics. Efficiencies in excess of 90 percent are possible, although these two methods would likely take more circuit board area to realize. The design presented in Fig. 1 delivers a small solution size with good, albeit not the greatest, efficiency.

One drawback of this design is the offset between the SS/TR pin and FB pin voltages. When the SS/TR pin is pulled all the way down to 0V, by decreasing the potentiometer resistance, there is still about 50 mA of current flowing through the LED. Thus, the LED cannot be turned off completely unless you add a switch to ground with a pull-up resistor connected to the EN (enable) pin.

The advantage of using the potentiometer circuit described in this article is its simplicity and cost-effectiveness. The required analog voltage for analog dimming is generated by a precise current source already in the IC which is then translated to a corresponding light output by a user-adjustable resistor. Besides this potentiometer, no other components are required. The input for the dimming, the potentiometer, is the only needed component.

Each of these three options requires an input from the user to vary the light. With the reference voltage IC, a potentiometer is still required as an input to the IC to adjust the voltage and control light output. The reference IC alternative is more costly than the simple option focused on in this article.

The final two alternatives require a microcontroller and again add cost. While smart phones and GPS systems include a microcontroller, the typical flashlight does not. The decision on pursuing such methods depends on the application at hand as some products would benefit from a more elegant user interface, perhaps with touch-screen control.

Option three replaces the potentiometer with a larger and more expensive DAC. The DAC could offer better granularity in the output analog voltage, and therefore more-precise light control than does the potentiometer. The application should dictate whether the expense is justified.

Using a potentiometer on the SS/TR pin of the buck converter is a simple, small, and low-cost method to provide linear analog dimming to a high-current LED in applications such as backlights and flashlights. With analog dimming, the efficiency over most of the dimming range remains near 85 percent from a 12V input supply. The complete circuit requires only six components, plus the high-power LED.