Initial testing of tunable SSL products was undertaken to understand the unique requirements of characterizing such products and uncovered substantial variations in performance of eight LED luminaires. 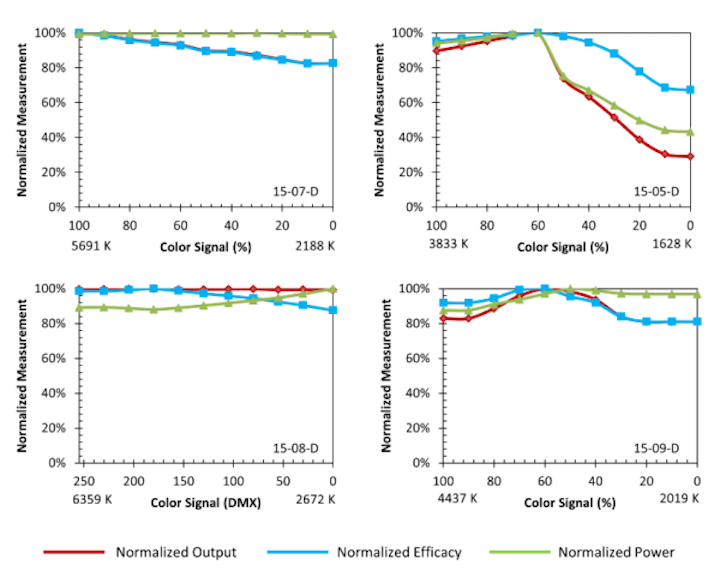 Initial testing of tunable SSL products was undertaken to understand the unique requirements of characterizing such products and uncovered substantial variations in performance of eight LED luminaires.

The US Department of Energy (DOE) has published its first Caliper test report focused on white-point-tunable LED-based luminaires. "Report 23: Photometric testing of white-tunable luminaires" details testing of eight products at full intensity over a range of different CCTs. The initial work was focused on understanding the tests and methodology needed to accurately characterize the performance of tunable products.

The Caliper testing included measurements at 11 color set points. The DOE said the LED luminaires exhibited variations in input power, lumen output, efficacy, and chromaticity at the different CCT settings. Moreover, the researchers said the variations would not be fully captured by testing at only a few CCT points, although five to seven test points could prove adequate. 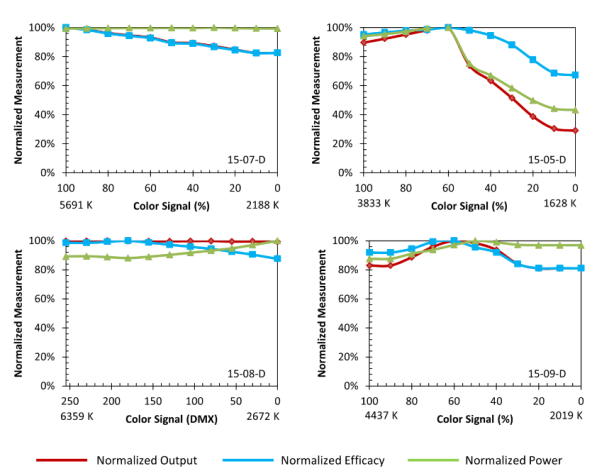 The tested products were LED luminaires intended for use in architectural lighting and not entertainment lighting. The samples included troffers and downlights. The tests did not include any dim-to-warm products that change CCT in a manner intended to mimic halogen dimming. The tested products could be set over a range of CCTs and dimmed at any CCT setting. Some of the products were designed for linear dimming while others were designed to track the blackbody locus. Controls included 0-10V analog, DMX, and DMX-based proprietary systems.

The architecture of the tested products varied substantially. Some used a simple mix of LEDs at two CCTs, while one used a mix of five different CCTs and yet another mixed off-white and red LEDs.

The DOE fully expected some variation in power draw, efficacy, or lumen output over the CCT range. Warmer-CCTs typically equate to lower efficacy. So product developers would typically have to design a product with constant power requirements and less lumen output at warm CCTs or for varying power input to keep lumen output the same. The nearby figure shows the performance of four of the test products. Efficacy dropped to 83% of maximum in one case, although the DOE noted that such a drop could still be acceptable in some applications.

Color quality and chromaticity were also areas in which the DOE sought to evaluate and understand the scope of testing that would be needed for accurate characterization of such product. The report said in some cases that the light became more green or pink as the CCT was raised. Clearly, that type of performance will not be ideal as the market for tunable LED luminaires develops.

The report said color rendition variation was generally small. The range was narrow enough that the researchers judged it would not impact decisions made by lighting designers/specifiers.

The DOE concluded that tunable products can’t currently match fixed color products in terms of efficacy or color quality at this time. But the report also notes that the tunable products can offer benefits beyond energy savings such as support for human-centric lighting (HCL).

You can view the full report on the DOE website. The tunable work joins other recent Caliper testing such as the most recent work on MR16 lamps. Earlier this year, the agency also released long-term test results for LED-based A-lamps.