New packaged LEDs from the global revenue leader deliver a uniform spectral power distribution across the visible-light region and target demanding lighting applications such as museums.

New packaged LEDs from the global revenue leader deliver a uniform spectral power distribution across the visible-light region and target demanding lighting applications such as museums.

Nichia has announced the Optisolis family of packaged LEDs that deliver what the company calls “Ultra-High CRI” across all 16 of the color samples that are used in characterizing a light source based on the color rendering index metric. The technology is based on blue pumps and proprietary Nichia phosphor technology and the company explicitly pointed out that there was no violet or ultraviolet (UV) spectral energy in the emission. Target applications start with museums and art galleries but could also include more mainstream solid-state lighting (SSL) applications such as retail, restaurant, and commercial spaces.

Interested in articles & announcements on packaged LEDs and SSL design?

Dig deeper into issues such as color quality, lumen maintenance, and more during the Strategies in Light conference, Feb. 13–15, 2018. View the conference schedule and register to attend the LED & lighting industry’s premier conference and exhibition.

Nichia is notoriously quiet about its LED development work and rarely publishes a press release on new products, so the Optisolis launch came as a bit of a surprise. Still, the company would provide few details other than spectral power distribution (SPD) and CRI graphs that support the claims of top-notch color rendering.

Make no mistake that Nichia is a powerhouse in the packaged LED sector. The company has consistently been at the top of the revenue data reported by our Strategies Unlimited market research team each year. As we reported last year after Strategies in Light presentations by the analysts, Nichia owned 13% of the market by revenue in 2016 and the nearest competitors were Lumileds and Osram Opto Semiconductors in the 8% range. Strategies in Light 2018 is only two weeks away, and we will learn of new market numbers during that event, but would expect Nichia to remain on top.

As mentioned earlier, Nichia emphasized that the Optisolis packaged LEDs use a blue emitter. Both the Soraa and Seoul products use a violet emitter. And both companies have claimed that the violet emitter eliminates the blue energy peak some associate with a visual hazard, albeit with the addition of some violet energy. Nichia said the lack of violet or UV spectra makes Optisolis more preferred for museums where UV can harm precious works of art. And some have speculated that we don’t understand the potential dangers of violet energy. 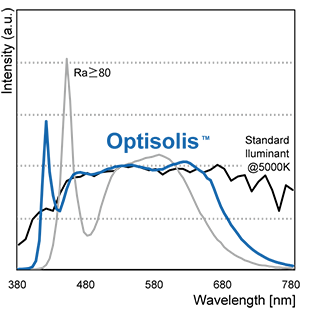 Looking at the nearby SPD graph supplied by Nichia, it does appear that the blue emitter is at a shorter wavelength (nearer violet and UV) than what is typical in the industry for phosphor-converted white LEDs. A Nichia spokesperson said the precise blue wavelength differs based on factors such as CCT and CRI.

Back to the SPD graph, you can see that the energy distribution is uniform across the human-visual range with the exception of the blue peak. And the CRI graph shows a typical white LED in gray with a huge drop at the R9 saturated red color sample. The Optisolis graph in blue only dips to 94, and the other values are near 100.

Nichia is bringing the Optisolis technology to market first in its 757 3×3-mm, mid-power LED family. Initially, the family includes LEDs at 3000K and 5000K CCT. The specified CRI is 95 minimum for Ra and 80 minimum for R9, but clearly Nichia expects better performance than those specs based on the graphs released with the announcement.