The NX-branded LEDs deliver 264 lm/mm2, setting what Cree says is a new lumen density milestone, while the lighting business at Cree has added models of the light-guide-based RSW area-lighting luminaires. 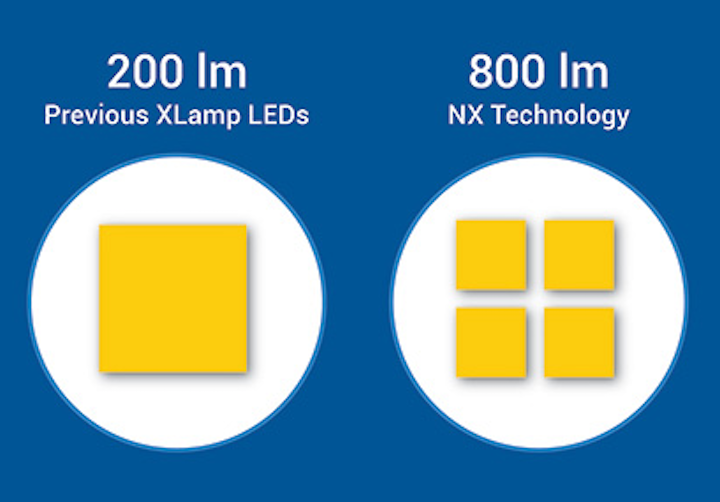 The NX-branded LEDs deliver 264 lm/mm2, setting what Cree says is a new lumen density milestone, while the lighting business at Cree has added models of the light-guide-based RSW area-lighting luminaires.

Cree has announced a new packaged LED technology and manufacturing platform that it calls NX, which will underlie what the company is calling Extreme Density (XD) LEDs due in volume production by the end of summer. Cree said the new platform will enable lumen density of 264 lm/mm2 — an achievement that Cree says is 50% higher than the top-performing LEDs currently available. On the same day, Cree’s lighting business unit expanded the RSW street-light family with more options in terms of CCT, CRI, and lumen output.

The Cree NX announcement came as somewhat of a surprise without the offer of a polished slide deck for the trade press explaining the value proposition. And we are awaiting answers to questions about the launch as we post this news story. So be forewarned that some of what follows is speculation.

It would appear that the NX launch is Cree’s answer to the chip-scale packaging (CSP) trend in the LED industry. We first wrote a feature on CSP technology back in 2015 and you can find many other shorter stories on our site chronicling the evolution.

Now the NX LEDs do not appear to meet some CSP tenets. There is clearly a ceramic substrate that forms the base of the package and the new LED chips that Cree calls Dmax are smaller in footprint relative to the actual package, based on an illustration on the Cree website. But the illustration and images on the NX page show products that look very much like CSP LEDs. And many companies, including Seoul Semiconductor, are using CSP technology to span the mid- and high-power sectors. The Cree NX LEDs will clearly serve as alternatives to high-power LEDs. 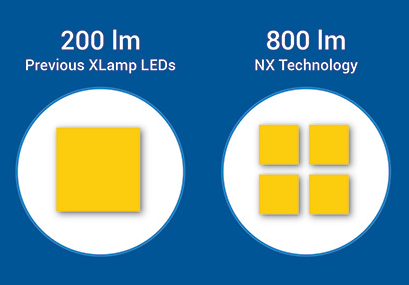 What the NX LEDs will enable is dense integration of the packaged components in luminaire products or on level 2 printed-circuit boards (PCBs) or light engines. Indeed, the Cree NX web page shows dense packaging similar to CSP marketing materials from other companies. Cree further makes the point that NX will enable dense packaging of LEDs of different colors or CCT ratings, thereby enabling tunable-white luminaires and color designs for applications such as horticulture, that also leverage the XD lumen density advantage.

Cree did not provide many details about the first XD16 LED due on the market. We presume that the 16 refers to a package measuring 1.6×1.6 mm. In the current Cree portfolio, the XD16 might be considered in the same class as the XQ-E LEDs. White XQ-E products top out at around 334 lm. Based on the stated lumen density levels, the new XD16 LEDs might hit the 800-lm level.

Meanwhile, the Extreme Density labeling just adds to the growing set of modifiers that Cree has used to describe new LEDs in the last few years. It seems the XD designation is nearest the Extreme High Power (XHP) designation that covers larger LEDs, although those LEDs are general multi-emitter designs. But Cree also uses High Density (HD) to refer to LEDs that stretch the lumen density curve. Meanwhile, High Intensity (HI) is used to describe LEDs that enable better optical control and concentrate energy in a narrow beam. Cree says that the XD16 LES will “enable higher performance luminaires with better light control.”

Getting to the new street lights, the RSW family has won praise for its light-guide-based design that enables low glare, and that Cree has also used to mix two LED channels or colors (blue shifted yellow plus red) to realize warm CCTs with little efficacy penalty. Moreover, the initial products featured a relatively high CRI of 80.

Now Cree will offer the design in cooler CCTs such as 5000K. Moreover, those designs likely use a single channel of white LEDs and should prove less expensive than the warm-CCT RSW products. The new RSW models have a CRI of 70 that is more typical of street lights on the market. Still, the WaveMax light guide should yield the same low-glare benefits.

The new products will also deliver an improvement in efficacy. The original 3000K luminaires were rated at 115 lm/W. Cree said the new products deliver 128 lm/W. Of course, LED evolution would have delivered some of that efficacy gain over the course of the last year, even without a move to cooler CCTs and/or lower CRIs.