The US Department of Energy expects warm white LEDs to reach near efficacy parity with cool-white LEDs by 2025, but OLED performance improvement is trailing expectations. 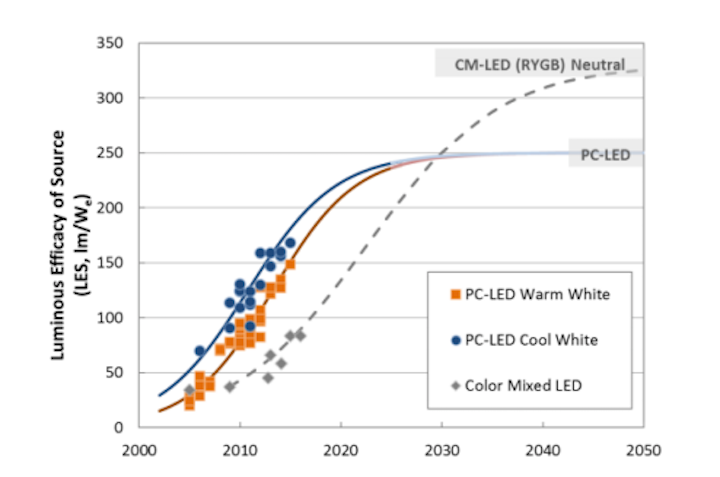 The US Department of Energy expects warm white LEDs to reach near efficacy parity with cool-white LEDs by 2025, but OLED performance improvement is trailing expectations.

The US Department of Energy (DOE) has published is annual Solid-State Lighting (SSL) R&D plan. This year, the plan is split into two documents: the 2017 Suggested Research Topics and the Supplement to 2017 Suggested Research Topics. The latter of the two contains the latest DOE projections on efficacy advancements and energy savings while the former succinctly defines specific areas where more research is needed in the SSL sector.

Interested in articles & announcements on LED and OLED technology?

The new document structure marks the second time in recent history where the DOE has changed the structure of its R&D planning and reporting. The agency has published the annual R&D Plan since 2015. Prior to that year, the agency published separate Multi-Year Program Plan (MYPP) and SSL Manufacturing Roadmap reports.

The 2017 supplement projects energy savings based on the SSL industry’s current path and based on the DOE’s more aggressive goals — both relative to a scenario in which no LED lighting had been installed. Based on the current industry path, the DOE said the LED transition will save 42 quads of energy cumulatively from 2015 to 2035 in the US. A quad is approximately equivalent to 293 TWh or a quadrillion BTUs. The DOE further said that if the industry can meet DOE goals, the cumulative savings could reach 62 quads with the additional 20 quads being enough energy to power 90% of US homes for a year. 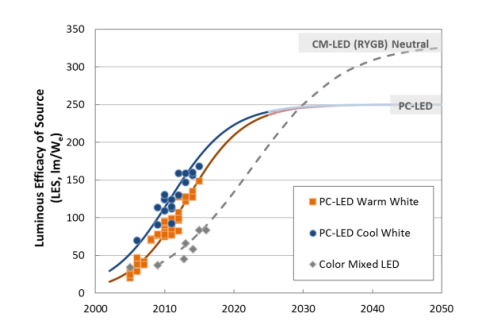 Shown are LED package efficacy projections for commercial products. As with many “disruptive innovations,” the color mixed-LED architecture currently has lower performance than the current dominant pc-LED architecture, but it has the potential in future years to leapfrog beyond. (Image credit: US Department of Energy.)

The news is not nearly so good in the OLED sector. The DOE said the OLED sector has not been able to crack the 100-lm/W barrier outside the laboratory. Back in 2014, the DOE had projected that such panels would have been widely available by now.

Going forward, the research topics document suggested that study of efficiency droop in blue LEDs will remain a priority. Moreover, the agency states that improvements in green, red, and amber LEDs will also be critical. The document further calls for advancements in downconverters such as phosphors.

The new plan also calls for advancements at the system or luminaire level. The agency expects luminaires to reach 200 lm/W at the system level by 2020. Moreover, the report is calling for new and novel form factors. LED drivers or power supplies are also addressed with greater efficiency and longer life being key goals.

You can read the full details of the new SSL R&D Plan on the DOE website.