The US Department of Energy has studied new open-plan office lighting at a New York accounting firm, and found the SSL installation pleasant for the employees yet trailing LED luminaires in efficiency. 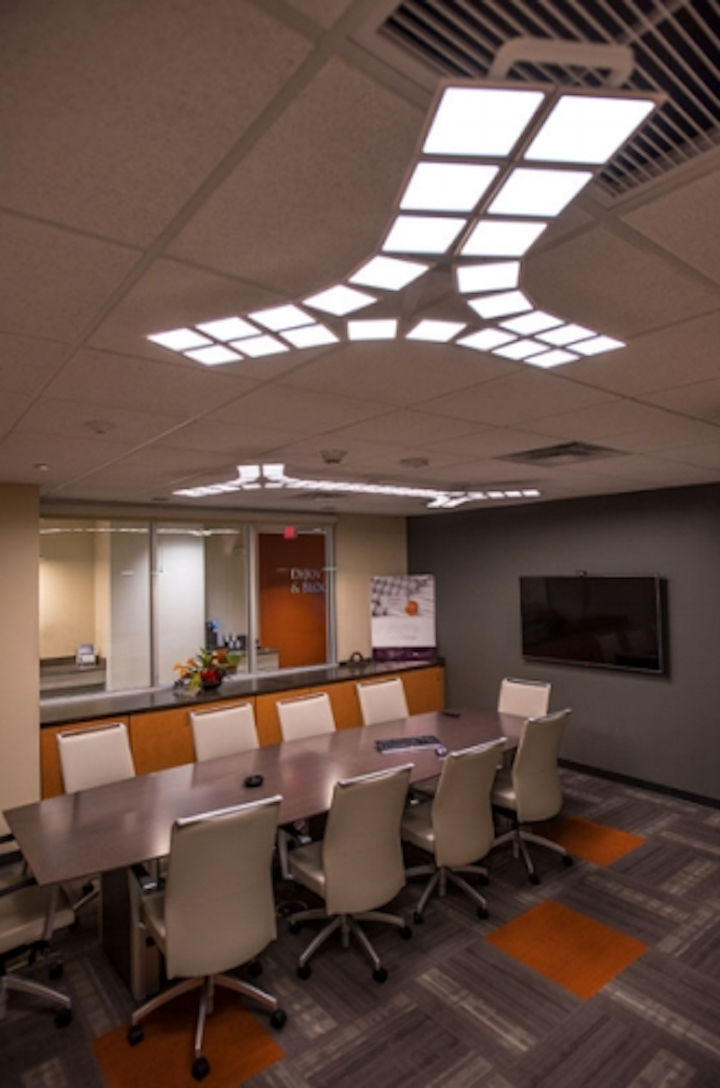 The US Department of Energy has studied new open-plan office lighting at a New York accounting firm, and found the SSL installation pleasant for the employees yet trailing LED luminaires in efficiency.

The US Department of Energy (DOE) has published another in its series of Gateway reports that evaluate the performance of real-world solid-state lighting (SSL) projects in general illumination applications. The latest Gateway project primarily uses OLED-based lighting, although some LED-based products were used to hit required light levels. The report states that the OLED lighting delivers light on vertical surfaces better than LED products and makes faces and expressions clearly visible, but the OLED products increase lighting power density relative to a primarily LED-based installation.

The latest Gateway report is based on the new offices of accounting firm DeJoy, Knauf & Blood, LLP (often called TeamDKB) located in Rochester, NY. David DeJoy is a founding partner at the firm and is also the founder and CEO of OLEDWorks — a manufacturer of OLED panels. OLEDWorks had pursued OLED panel technology on its own for years and then also acquired the Lumiblade OLED operation from Philips Lighting in 2015.

The TeamDKB office project uses luminaires from a number of lighting manufacturers, but all of the products installed are based on panels from OLEDWorks. The OLED lighting products were installed in what were called visually-prominent areas including partners’ offices, conference rooms, entry corridors and reception, and the break room and lounge area. Amber OLED fixtures were also installed in a Zen/mother’s room and OLED desk lamps are located on desks in many offices. Recessed and pendant linear luminaires and recessed downlights based on LEDs were used in other private offices and in the open office space. 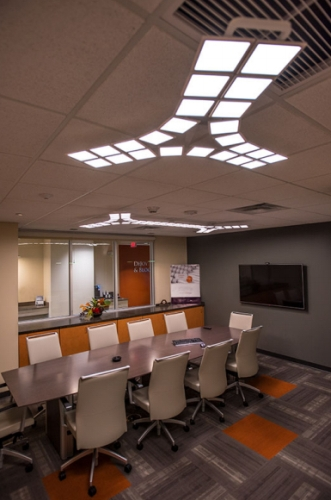 The lighting design was based on a layered approach. The LED products installed were specified at 3500K CCT and the OLED products at 3000K. The mismatch was intentional with the OLED lighting meant to stand out in the manner that 3000K halogen lamps are sometimes used for accent lighting. CRI of the OLED products varied from 79 to 91.

Judging the success of the OLED-heavy project was a qualitative exercise. The DOE interviewed workers from different areas of the space and across a broad age range. Generally, the workers prefer the OLED lighting to the LED luminaires, remarking that the latter are too bright. The workers appreciated the soft and comfortable appearance of the OLED products.

No one surveyed reported any glare issues with the OLED lighting. The report details that the OLED panels have surface luminances as high as 9300 cd/m2. The LED products range from 12,000–28,000 cd/m2.

Of course, the downside is cost, efficiency, and reliability for the OLED products. The DOE did not report the cost of the products, and whatever the cost was, it was in part offset by funding from the New York Energy Research and Development Authority (NYSERDA). But clearly today you pay a significant premium for the style and diffuse performance of OLED luminaires.

Efficacy for the OLED products used ranged from 21–58 lm/W compared to 80–90 lm/W for the LED products deployed. The lighting power density was calculated to be 0.6 W/ft2 for the combined LED and OLED installation. That density is below the 0.82 W/ft2 required by ASHRAE/IES 90.1-2013. But clearly an all-LED installation would be lower. The Gateway report did point out that actual power use will be below the calculated level because there are vacancy sensors in many areas that can automatically dim lights and because employees are regularly dimming the lights locally for visual comfort.

The DOE said it expects next-generation OLED panels to deliver 80–90 lm/W. Of course, that is a light source metric and not a luminaire metric. Remember LED sources have exceeded 200 lm/W in some cases.

Finally, the DOE warns that electrical specification needs to be handled carefully when OLED fixtures are involved. The panels draw increased power with age, and breakers and wiring must be installed that can handle that increasing load.

In an epilogue to the report, the DOE also noted that the office has since replaced some of the linear LED products in the open office space with Acuity Peerless Olessence luminaires. We covered Olessence in a feature article last year. It combines OLED and LED technology in one product with the brighter LEDs providing indirect light and OLED panels delivering softer direct light. Those products were installed after the DOE had done its research.

You can read the complete Gateway report on the DOE SSL website.