In artificially lit green houses with crops such as tomatoes, LED lighting can increase crop production and decrease power consumption, and PlantResearch in the Netherlands says the lights also increase the activity of the necessary pollinator bumble bees. 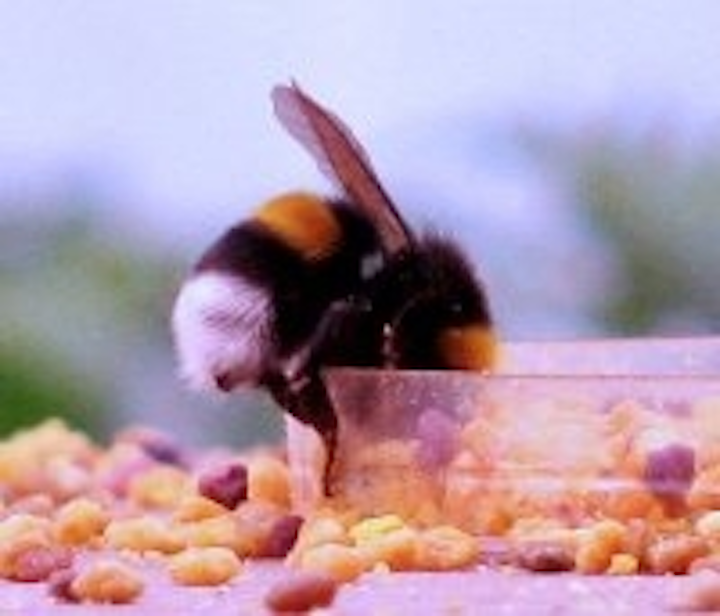 LED grow-light manufacturer Valoya has announced that horticultural research focused on growing tomatoes under artificial lighting at PlantResearch in Made, Netherlands has revealed additional benefits attributed to solid-state lighting (SSL) technology. The study revealed that the pollinator bumble bees, which are necessary for crops such as tomatoes and strawberries, are very active under SSL whereas with legacy high-pressure sodium (HPS) sources, the bees are only active when there is also some level of natural light.

The advantages of LEDs in horticulture is not a new topic. See the links to the right for some articles we've published. By matching LED light color to the peaks in plant photosynthesis sensitivity, researchers have demonstrated superior crop production relative to HPS. Moreover, LED lighting can be applied in strings or curtains between crops getting light to all areas of a plant, while reducing the energy used for artificial lighting.

The PlantResearch study, however, focused on a new benefit with bee activity. As you near the polar regions of the globe, greenhouses with artificial lighting are a requisite for crops due to short outdoor growing seasons and the lack of sufficient natural light on short winter days. Still, the crops need bees.

The study compared HPS lighting with Valoya's LED lights using what the company calls the AP67 general growth spectrum for plants. That option is available in all of the company's grow lights and has 18% of the energy in the far-red area and no UV radiation.

The LED lighting provided two bee-centric advantages. Bees in a hive became immediately active when the LED lighting was turned on at 4:00 AM, at which point there was no natural light. The researchers captured the activity with high-speed cameras.

In the HPS case, the bees remained in the hive when the artificial lights were illuminated. The bees only became active 4 hours later when natural light hit the greenhouse. Apparently, bees have trichromatic vision and can see three areas of the light spectrum but not the typical HPS spectrum.

The researchers also noted that the HPS lights produce heat, and bees often hit the fixtures accidentally and are killed. That problem doesn't exist with the LED lighting.

"We are currently researching and developing all aspects of our lights, including impact on both invited and uninvited insects," said Lars Aikala, CEO of Valoya. "From other trials we know that aphids have a lower reproduction rate under our LEDs compared to HPS and red-blue LEDs; now we know that our lights are bee friendly."

Purdue horticultural professor Cary Mitchell also released new research recently about LED lighting for tomato farming. Mitchell is pursuing the research with the belief that the produce should be grown near the consumer as opposed to being shipped from faraway places such as Mexico. Local LED-lit farms could reduce the cost of shipping and provide better products to the consumer because the fruit could be picked ripe rather than green.

In a recent study with tomatoes, Mitchell reported that HPS and LED lighting provided similar yields. But the LED-lit operation reduced energy usage by 25%.

Mitchell believes that yield can be increased by lighting with vertical LED strings that deliver light to the lower portions of the plant. Mitchell will test that theory and also plans to conduct taste tests to compare tomatoes grown under LED lighting to those grown under natural light.