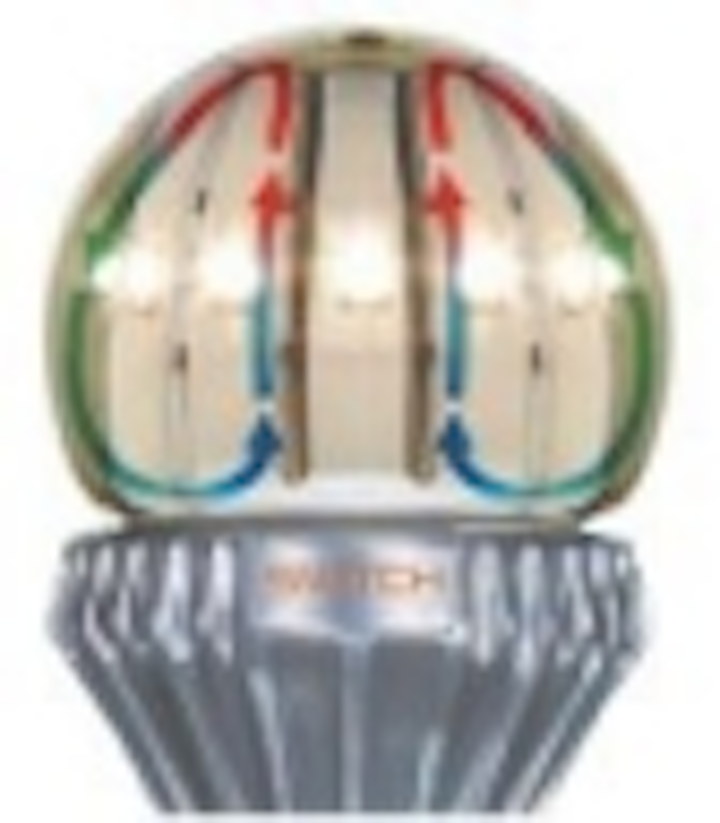 At The LED Show this week in Las Vegas, NV, Tracy Bilbrough, CEO of Switch Lighting announced the brand behind its patented liquid cooling technology used in its LED A lamps, called LQD Cooling System. Bilbrough stated that LED-based A-lamps are reaching their tipping point for increased adoption worldwide. In his talk, Bilbrough stated that several LED-based luminaires have already reached their tipping points in commercial markets, such as downlights. He commented that LED A lamps have lagged in adoption for a number of reasons including the requirement for an omnidirectional distribution pattern and compatibility with dimming systems.

A challenge for all LED-based lamps is thermal management. While competing LED-based A lamps from companies including GE, Osram Sylvania and Philips utilize aluminum heat sinks as their primary method of thermal management, Switch uses both a heat sink and a conductive cooling approach by filling the bulb with a proprietary silicone-based liquid. Bilbrough stated that most of the lumen output from the LEDs is maintained because the silicone is “index matched” to the LED substrates. He claimed that only 3% of the light output is not transmitted through the lamp.

The LQD Cooling System combines active cooling with liquid silicone with its internally-developed driver. Silicone is electrically non-conductive, non-toxic and does not degrade LEDs. Bilbrough stated that because the silicone moves the heat generated by the LEDs out to the exterior of the bulb, Switch bulbs actually feel hotter than competing products during use. He added that the heat transferal actually allows use of the Switch lamps under conditions that have traditionally been a challenge, such as in very confining fixtures.

In May, LEDs Magazine reported on the introduction of 100W-equivalent LED lamps from GE and Philips Lighting. For its 100W-equivalent lamp, Switch is claiming 1600 lm output but only a CCT of 4000K at present. Bilbrough said they expect to drive the color temperature of this product down in the coming months. Currently, Switch is not targeting consumer applications but only commercial sales of its line of 40W-, 60W-, 75W- and 100W-equivalent lamps. “We expect the consumer market to become much more attractive approximately 12 months from now when the price of a 60W-equivalent lamp drops from around $39 retail to around $20,” he said.

Switch did originally announce its A lamps in April of 2011. However, the design of the lamps has since changed with the LEDs no longer suspended on metal fingers. In the most recent design, the LEDs facing the exterior of the lamp are mounted on printed circuit boards.