Cree has again expanded its presence in LED retrofit lamps with PAR38 products in varied beam spreads while also entering the market for SSL tubes intended to replace T8 fluorescents and work with existing ballasts. 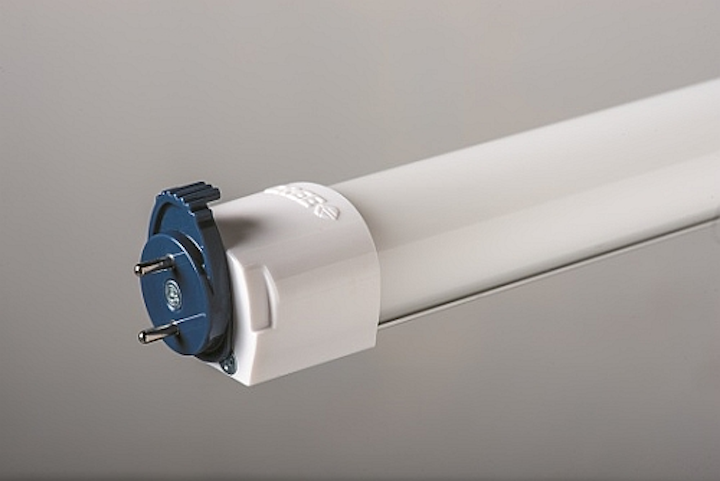 Cree has announced new PAR38 products in its LED-based replacement lamp family, and for the first time introduced LED-based tubes meant for direct replacement of fluorescent tubes. The PAR38 solid-state lighting (SSL) products are available with 27° spot and 47° flood beams and are rated for 25,000 hours of life. The Cree LED T8 tubes, meanwhile, are warrantied for five years and sell for a suggested $30 at retail.

Cree joins a growing list of companies that are offering LED-based replacement tubes for fluorescents and more specifically products designed to work with existing installed fluorescent ballasts. For example, Philips Lighting announced such a product in the InstantFit family this past January. The primary advantages of such products are the ability to change nothing but the tube to move to LEDs and potential energy savings and thereby the ability to gradually migrate to SSL as fluorescent lamps fail. Of course, leaving the ballast in the system creates an additional possible point of failure in the fixture. 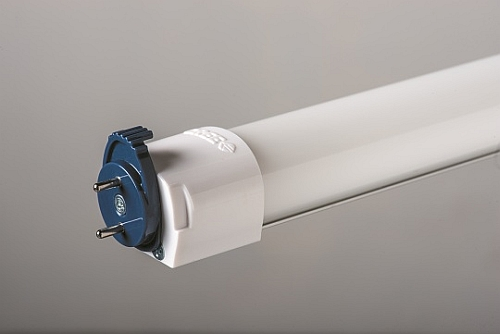 The prevailing wisdom in the lighting industry has been that tube-based retrofits were best accomplished either via bypass of the existing ballast and/or installation of a dedicated driver for the LED tubes. For example, we published a feature article in late 2012 on the possible safety and reliability implications of replacement tubes. Even Cree earlier announced a product called the UR Series LED Upgrade Kit that relies on an external driver for tubes that were screw mounted to existing fixtures.

But clearly the potential market for the direct-replacement tubes is so large that companies feel the need to supply such products. The US Department of Energy has estimated that there are well over 1 billion T8 sockets with electronic ballasts installed in the US alone. Cree says that its T8 tubes will work with existing instant start, programmed start, rapid start, and most dimmable fluorescent ballasts -- all of which fall into the electronics as opposed to the magnetic category. And the Cree tubes are dimmable.

Of course, the challenge for Cree and others is to have the LED tubes work with as many existing fixtures as possible. Cree said it developed a driver design that presents a resistive load to the ballast, which will maximize compatibility, whereas many of the tube products on the market present a reactive load.

Cree suggests that the new product will crush the market for fluorescent replacement tubes. "There’s no reason to install another linear fluorescent tube again," said Chuck Swoboda, Cree chairman and CEO. "Similar to what we’ve achieved with the Cree LED bulb in the residential market, the Cree LED T8 Series is revolutionizing the commercial lighting market with a product that saves energy, delivers superior light quality, and is universally compatible with nearly all existing fluorescent T8 ballasts."

The latter part of Swoboda's statement perhaps hints at the biggest advantage of the new Cree T8 product family. The T8 tubes are part of Cree's TrueWhite branded product group that implies a CRI specification of 90 or above. Philips offers a CRI of 85 with its InstantFit tubes, and most other companies offer lower CRI in tube products. Cree is presenting the replacement tubes as clearly superior in terms of light quality to the best fluorescent tubes on the market.

Cree also asserts that its optical design offers advantages over the competition. Whereas many LED T8 tubes are cylindrical, the Cree design is slightly oval in cross-section and Cree said that design outputs a fraction of the 2100 lm as uplight. The uplight is useful for better beam distribution in many existing fluorescent fixtures that are based on reflector technology.

Cree will offer the tubes in 3500K- and 4000K-CCT models. The products are rated for 50,000 hours of life. The lamps deliver more than 100 lm/W in efficacy at the system level including the ballast in the system.

Meanwhile, Cree also has added to its line of LED retrofit lamps that primarily target the residential market. The PAR38 Cree LED bulb family is designed to replace 90W legacy lamps with the SSL products coming in at 18W. Cree said that the 90W product is the most widely used PAR lamp in the residential space. 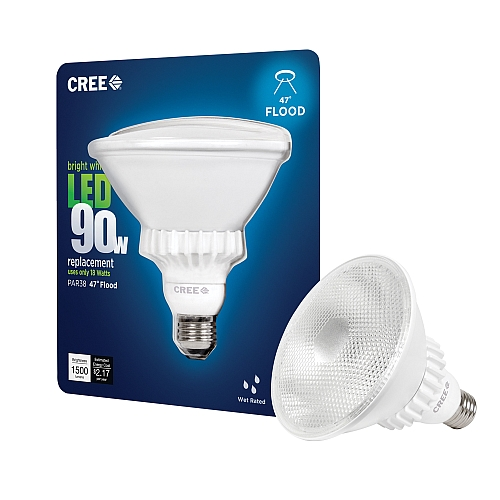 "Addressing consumer spot, flood, and outdoor lighting applications is the next logical step in growing our LED bulb portfolio," said Norbert Hiller, Cree executive vice president, lighting. “The PAR38 Cree LED bulb provides a lighting experience customers expect, but at a fraction of the energy consumption and cost of a traditional halogen PAR38, providing yet another reason to switch to LED and change the way people think about lighting forever."

The PAR 38 lamps are UL listed for use in outdoor applications where the products are exposed directly to the environment. Indeed, Cree says the lamp is rated for wet and not just damp environments.