Version 1.1 of the Hue app enables location-based control of the color-changing lamps, use of the lamps as indicators and alarms, and continuous control via an Internet service. 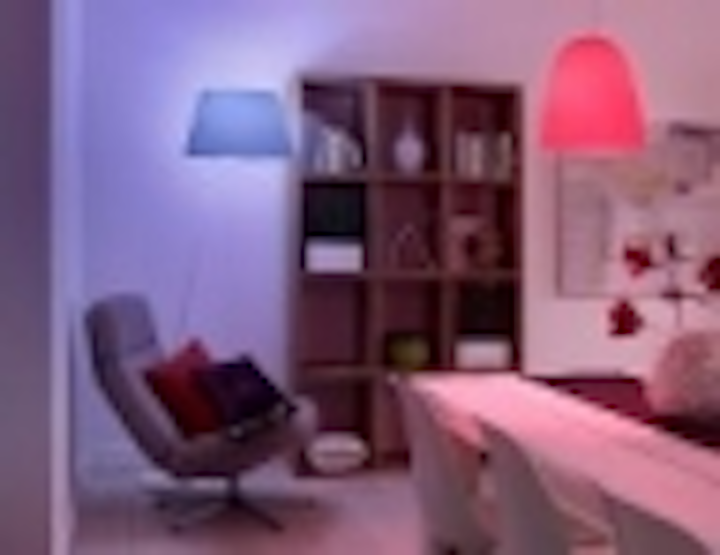 Philips Lighting continues to expand its Hue platform both in terms of new functionality in version 1.1 of the Hue smartphone app, and in broader availability. The new version allows you to use Hue as an indicator for alarms or timers, and to use the GPS functionality on your smart phone to control the lamps. Moreover Philips has partnered with the IFTTT (If This Then That) Internet service that allows you to set triggers based on events ranging from your favorite sports team scoring to the time of the day.

In terms of availability, Hue will continue to be sold by all Apple stores and the Apple online store. Philips will broaden the availability to include Australia and New Zealand. Philips will sell the lamps through a network of 550 Apple resellers in Europe. And the product has already come to Amazon.com in the US.

The new functionality begins to deliver on some of the promises that Philips made at the Hue launch. For example, you can use the GPS feature of a smartphone to trigger a specific action in the lamp. A simple case could be turning your lights on automatically when the Hue app senses via the GPS that you are nearing your home. Likewise the app could turn lights off automatically when you leave home.

Philips also said you can forget traditional audible alarms clock with the app. The program allows you to set the lights to automatically turn on and act as an alarm. But the functionality goes further. For example, you can set the lights to gradually brighten or change color over time for a gentle awakening.

The timer and alarm functionality allows you to configure Hue to trigger on multiple events and use different light settings to signify different events. For example you might have one or more lamps flash red when the cake you are baking needs to be removed from the oven. Green lights might remind you of a scheduled teleconference.

The IFTTT partnership extends the functionality that is integrated into the app. IFTTT is a web service that allows users to create connections between triggers and actions and store those as personal recipes. The recipes are based on channels. Channels include web-based information resources such as current weather, news reports, and sports schedules or results. Channels can also include social media sites such as LinkedIn or Facebook, and email messaging.

Recipes are a simple one-line combination that defines if a trigger happens then a specific action should take place. IFTTT and Hue could set lamp colors based on the weather – perhaps a blue light for rain. You could tie specific light scenes to the stock market or to remind you that your favorite sports team has a game that is about to start. Recipes can check triggers as frequently as every 15 minutes, so you could set Hue to mimic a sunrise or sunset.

The new app follows on the heels of the announcement at Lightfair that Philips would deliver a BR30 Hue lamp this fall. Bruno Biasiotta, president and CEO of Philips Lighting Americas, said that the company introduced the product early to make its commitment to the Hue platform clear and to make sure it wasn't a one-off product. Indeed Biasiotta said a GU10 version would be announced later this year.