DOE releases Caliper research on ambient lighting, and other LED and SSL reports

Caliper research compares the lighting quality and performance of fluorescent and LED options in commercial ambient lighting applications that use ceiling troffer fixtures, while the DOE completes an LED environmental study and the National Academy of Sciences studies the SSL transition. 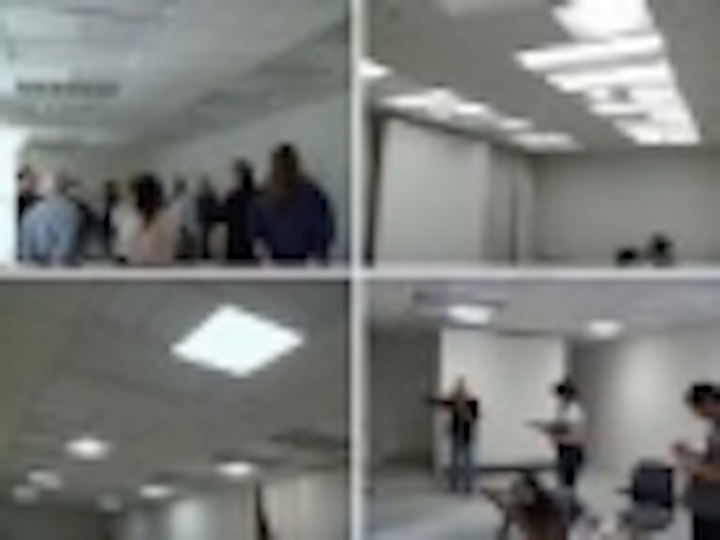 The US Department of Energy (DOE) has released its latest Caliper study on LED-based solid-state lighting (SSL) comparing a number of LED-based options with legacy fluorescent sources for commercial ambient lighting. The DOE also has completed its work studying the environmental impact of LED technology, relative to legacy sources, over the course of the complete lifecycle of a lighting product. The National Academy of Sciences (NAS), meanwhile, has studied the transition to SSL, and made recommendations on continued R&D funding on the technology.

The Caliper study marks the first time since the Round 13 study in 2011 where the DOE has compared LED technology in ceiling troffers relative to legacy fluorescent sources. The new study shows steady improvement in SSL and reveals that LED options prove to offer better efficacy, although the lighting designers and facility engineers that participated in the research noted problems with dimming, flicker, glare, and color consistency.

The "Recessed Troffer Lighting" study is based on a comparison of 24 pairs of installed ceiling troffers with the goal of determining the suitability of SSL options as replacements for incumbent fluorescent sources. The study was undertaken because T8 and T5 fluorescent troffers are the most commonly used lighting in commercial settings including offices and classrooms. Retrofit of such fixtures could potentially deliver huge energy savings, but only if the SSL options perform in an acceptable manner.

The study methodology included installation, at the Pacific Northwest National Laboratory (PNNL), of an identical pair of each tested fixture so that the consistency of the pairs could be compared and the fixture-to-fixture performance of different products could be compared. The 24 pairs included 3 legacy fluorescent T8 troffers to serve as a benchmark, 5 troffers that had been retrofitted with LED-based tubes, 4 troffers that had been retrofitted with non-tube LED fixture-upgrade kits, and 12 purpose-designed LED troffers.

The results of the study are hardly surprising, but instead show the steady progression of the LED and SSL industries since the last related Caliper study. Generally, the LED-based products offer better efficacy. Average efficacy for the LED lights tested was 80.3 lm/W compared to a 59.6-lm/W average for the fluorescents. In some cases the SSL units outperform legacy fluorescent fixtures in other areas but light- and color-quality problems persist.

The purpose-built, integral LED-based troffers were the top SSL performers, with all providing superior efficacy to the fluorescent benchmark fixtures. Moreover the study revealed that many provided better performance in areas such as uniformity or CRI.

The troffers that had been retrofitted with LED-based tubes offered efficacy only in the same range as the fluorescent benchmarks. Moreover, because the LED-based tubes don't radiate in an omni-directional manner, the retrofitted fixtures can suffer from light and dark stripes on the troffer diffuser lens of in the parabolic reflector. The study said concerns also remain over the safety and performance of retrofit tubes that may persist and make the tube retrofit an unattractive option.

The kits that are designed to be installed into the shell of existing troffer fixtures provided an efficacy advantage but also presented some other problems. The testers noted issues with consistency of color or light patterns. But the study also notes that the issues should be addressable via better engineering.

The LED options also resulted in some concerns about color temperature. The fixture pairs exhibited consistent color. But the judged color from product-to-product and manufacturer-to-manufacturer weren't necessarily consistent even when products were specified to the same 4000K CCT. In a setting where troffers are combined with other fixtures such as downlights in the same room, the lighting needs to be consistent in color. But the testers noted that may not be the case if the different fixture types come from different sources.

A quote from the report summary succinctly states a conclusion – "LEDs have not improved recessed troffers. But they have made them more efficient." Indeed fluorescent troffers have never been noted as excellent performers in terms of light quality, but rather as a cost-effective energy-efficient choice. LEDs may continue that trend. You can view or download the report from the DOE SSL website.

The new environmental report is the third and final part of a comprehensive DOE research project focused on the environment impact of LED technology, relative to legacy sources, over the course of the complete lifecycle of a lighting product. The first two reports had concluded that LED lamps have far less impact on the environment than do incandescent lamps and slightly less than compact fluorescent lamps (CFLs). The energy savings afforded by LEDs during operation overwhelmingly outweighs any other lifecycle issues. And the LED advantage will increase as the technology continues to improve. Part 3 suggests that there is no toxicity issue that should preclude usage. See our more in depth article on our LEDs Magazine website for more details.

The above link also includes details of the NAS study which both discusses obstacles to broad SSL adoption and recommendations on R&D funding to overcome the barriers to deployment. The NAS openly encourages the government to continue its investment in the DOE SSL program.