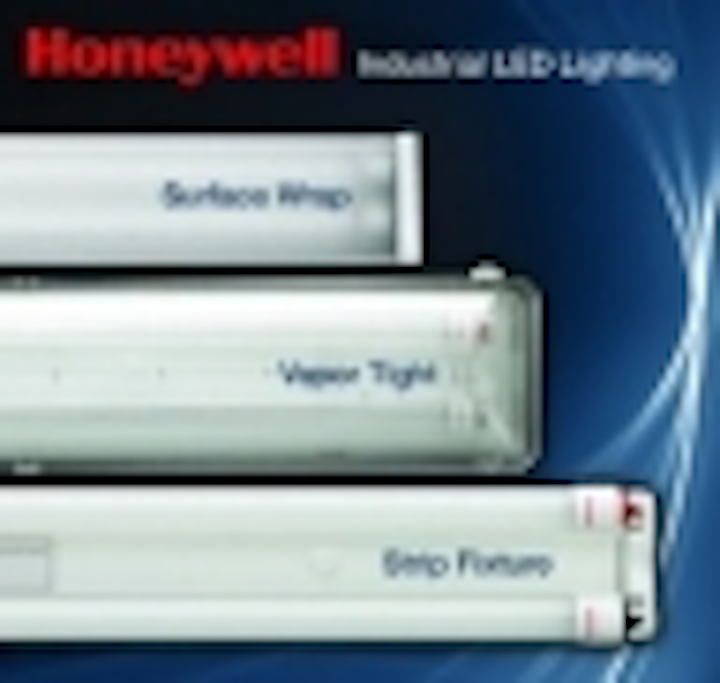 Honeywell has announced that its newly-formed LED Lighting Solutions business unit will launch a line of energy-efficient solid-state lighting (SSL) products to the North American commercial market. The potential for offering energy-saving lighting led to the new business unit with Honeywell planning to bolster the baseline efficiency of LEDs with its broad line of building-control and –automation products that can support adaptive lighting control scenarios.

Initially, Honeywell will offer the linear LED-tube-based products pictured, primarily for commercial and industrial applications. The portfolio includes Strip, Surface Wrap, and Vapor Tight products. The company said the design delivers better beam control than competing LED tubes with the ability to offer a ±30° adjustment in beam angle. The products rely on external drivers integrated in the fixtures.

The initial products target lighting applications including stairwells, parking garages, manufacturing floors, cold storage facilities, and warehouses. Later in 2013, the company plans to add retrofit tube lamps, planar ceiling fixtures, and high-bay luminaires. Honeywell said that it will also roll out a new line of lighting controls including sensors and switches that can be integrated with other Honeywell building controls.

Honeywell has offered LED lighting in other regions of the globe for some time including Europe and Asia Pacific. For example, the company said that more than 80 Walmart stores in China have been retrofitted with Honeywell LED lighting.