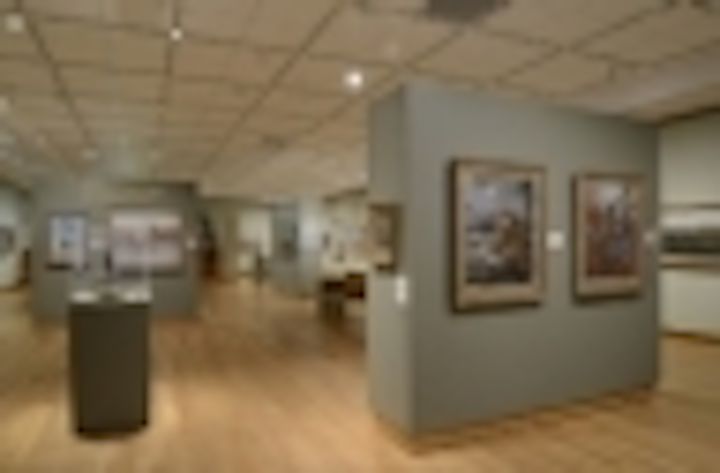 Curators were initially skeptical of energy-efficient LED lighting, but the Leigh Yawkey Woodson Art Museum in Wausau, Wisconsin installed solid-state lighting (SSL) in a new gallery that will host a permanent collection of 43 paintings by artist Owen J. Gromme. The Journée Lighting Zinnia 1000i track fixtures with GE Lighting Infusion LED modules use 30W less per fixture relative to the typically used halogen lights, and are delivering the requisite color rendering capabilities and what the museum characterized as a more pleasant, softer edge.

The Woodson museum is best known for its Birds in Art exhibition, which Gromme has been credited with creating. He served as the guest curator of the inaugural exhibition in 1976 and now 43 of his paintings will be on permanent display.

The museum, with a nature focus, has long sought to adopt sustainable practices and is certified Travel Green by the Wisconsin Department of Tourism. That green focus led to the consideration of LED lighting despite concerns about high upfront costs and the quality of the lighting.

Specialty Lighting Sales of Wisconsin assisted the museum in testing both LED replacement lamps and integral luminaires. Those tests led to the selection of the Journée fixtures with the GE modules.

"What was critical for us as an art museum was the evenness of the color," said Andrew McGivern, curator of exhibitions at the Woodson. "We needed a light with a high CRI to provide even and consistent color distribution throughout the gallery."

GE offers the Infusion modules over a range of flux output and with tight color binning. The module/fixture combination also offers the high performance of an integral luminaire and the flexibility of a lamp and housing. The Infusion modular light engines are easily installed, allowing the museum to choose the proper light output for each fixture.

The modular aspect also helped the museum in its decision making. Though the staff projects that the lights will deliver 8–10 years of life with no maintenance, the modules can be easily replaced if need be. The modules are designed to standards set by the Zhaga Consortium — a lighting industry coalition focused on developing standardized modular LED light engines (For more background on Zhaga, see "Zhaga writes the book on LED light engine specifications"). Standard modules mean that other companies may offer compatible light engines offering further flexibility.

"The flexibility of the Infusion system is among the reasons we chose it," said McGivern. "It sets us up to adapt to new lighting technologies down the road by allowing us to easily switch out the modules."

Typically, the museum would have used 50W halogen MR16 lamps in such a project. The 20W LED lights provide the clear energy savings and also reduce the HVAC load, because they generate far less heat, leading to additional secondary savings.

"Although we were skeptical at first of LED lighting solutions because of initial cost, we're now so pleased with the color and the clean, white light in our new gallery that we're looking to retrofit all of the galleries with LEDs," said McGivern. "Compared to our old halogen lamps, the LED lights have a softer edge; when you step from a traditionally lit gallery to our new gallery, the new museum lighting creates a completely different atmosphere and a fresh appearance for visitors."