The historic lobby of the old Michigan National Bank in Grand Rapids has been reimagined as The Ballroom at CityFlats with modern intelligent LED lighting matched to period architecture. 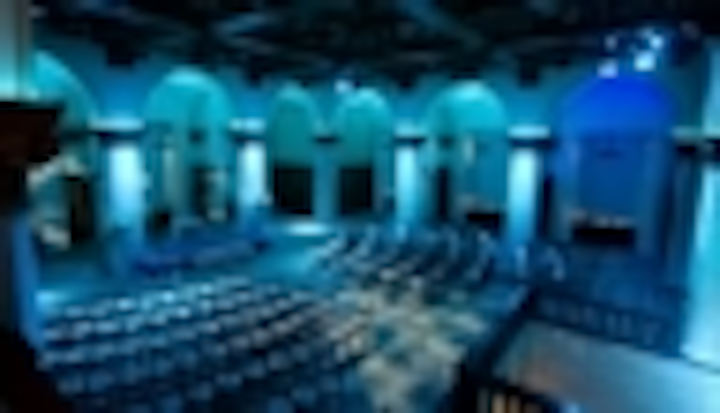 The Michigan National Bank building in Grand Rapids dates to the 1920s and the old lobby features an ornate paneled ceiling, intricate woodwork, and prominent columns, yet had sat empty for more than a decade. Now the boutique CityFlats hotel adjacent to the building has worked with Elation Professional and design firm LiveSpace to create a dynamically lit ballroom that is energy efficient and features the latest in adaptive controls.

The building owner had resisted other proposals for the 6000-ft2 space based on a desire to maintain the historical significance. "The bank building’s owner had a lot of people approach him about doing something commercially with the space, but basically they wanted to gut it. He refused to do it because of the historical implications,” said Todd Ernst of LiveSpace. “Finally, the hotel owner contacted him and said they were interested in turning it into a ballroom, which fit in perfectly with the vision of what the building owner wanted to maintain."

The result has been a highly coveted hall for events such as wedding receptions and other functions. Moreover, the finished hall delivers on maintenance of the historical elements of the room.

"We were under very close scrutiny of the building owners to make sure our integration blended seamlessly with the overall classic, yet updated, design and feel of the room," said A. J. Sweeney of LiveSpace. "The goal was to be able to create an impressive, coherent and holistic design that could transform the atmosphere of the room into anything the end-user desired. At the same time, we were tasked with making sure the room maintained the integrity of its original design and looked natural when the lights were powered off."

The team faced the normal challenge of cable installation and management in an older building. But lower-power LED lighting simplifies that task, and LiveSpace was able to install the cable in existing chases. Sweeney said that the result looks "essentially wireless."

Lighting the columns in an impactful manner, yet in a way that doesn't impact room occupants, was also a challenge. Sweeny said the owner didn’t want any fixtures on the floor and added, "It was a delicate balance to make sure we were able to showcase the room’s structural beauty without the pillars having to compete with the visual presence of the fixtures." The lights were positioned in raceways under the domes and to the sides of the main pillars in the room.

The result is clearly evident in the nearby photo. According to Elation Professional and LiveSpace, the owner has said that the results exceeded expectations. The popularity of the space with locals and visitors is validating the LED-based design.