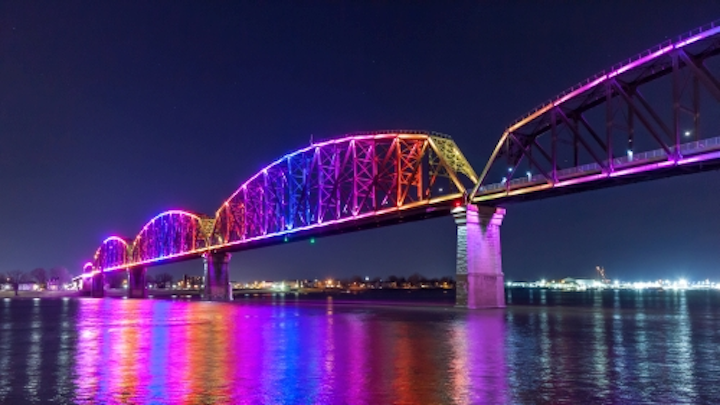 Philips Lighting has announced an LED architectural lighting project installed on the historic Big Four Bridge that links Louisville, KY and Jeffersonville, IN across the Ohio River. The dynamic, color-changing solid-state lighting (SSL) is intended to help revitalize the Louisville waterfront and make the pedestrian and bicyclist bridge a destination point in the region. 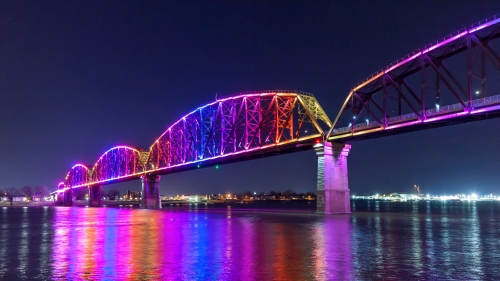 The Big Four Bridge was originally built in 1895 as a railway bridge and was named based on the four railways served — Cleveland, Cincinnati, Chicago, and St. Louis railways — which were collectively dubbed the Big Four Railroad. The bridge was decommissioned in 1969 and much later renovated by a public-private partnership for pedestrians and cyclist and reopened in 2013.

The project is certainly not the first to use dynamic LED lighting to highlight a railroad heritage in revitalization efforts. For example, we featured the Light Rails project in Birmingham, AL back in the fall of 2013. That project has drawn tourists and increased safety in Birmingham.

In Louisville, the reincarnation of the bridge had already been a hit with as many as 1 million people visiting annually including both residents and tourists. The architectural lighting was intending to add a nighttime element to what had become a popular draw, with the SSL project able to act as a backdrop for waterfront events. The lighting was included in a six-year plan launched by Mayor Greg Fischer to leverage energy-efficient LED lighting to create a green and inclusive environment around the city.

"This was a strategic opportunity to leverage LED technology to further enhance the city’s most popular attraction and continue the momentum of moving Louisville forward as an innovative and independent city," said Mayor Fischer. "The new lighting will make the bridge safer at night, enhance waterfront events, and contribute to the artistic flair and pride of this community."

The project utilized more than 1500 Philips Color Kinetics luminaires on the interior and exterior structure of the bridge. The dynamic software-based control system was installed by Vincent Lighting Systems. The light show is visible from dusk to 12:30 AM nightly from the bridge and surrounding parks.

Louisville hopes that LED architectural lighting will help boost tourism just as SSL projects have done so in other cities. For example, the San Francisco Bay Bridge "Bay Lights" project has been very positive for the California region and is nearing the end of a two-year run, although plans are underway to revamp that project.

Philips has been instrumental in supplying the SSL products for many of the most significant outdoor architectural lighting projects around the globe. Philips was the supplier behind the Birmingham and San Francisco projects. Philips also supplied the lighting for the dynamic lighting of the Miami Tower, New York's Madison Square Garden, and many more SSL projects.

"Illuminating iconic structures creates a meaningful impact in a community, a source of pride for residents that brings people together, attracts visitors, and is a reflection of the city," said Amy Huntington, president of Philips Lighting Americas. "The Big Four Pedestrian Bridge is a shining example of the positive impact that public-private partnerships can have in our communities. We are committed to working with city officials and local organizations to help make neighborhoods more livable."