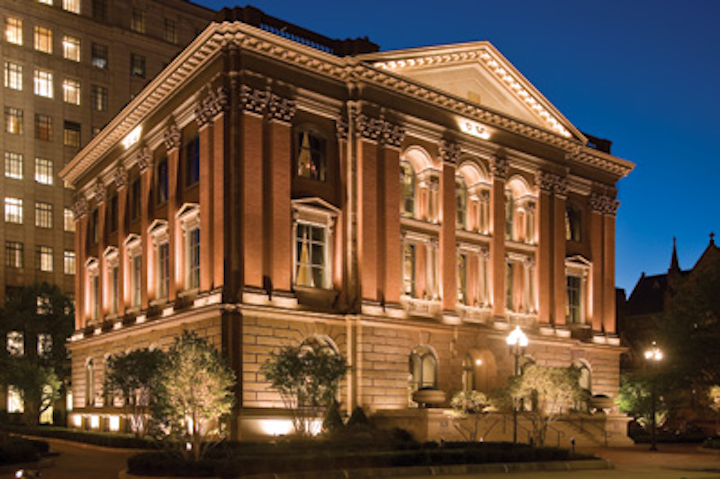 Commercial applications dominated the 37th annual Cooper Source Awards announced at LightFair International this year, although one very compelling residential application made the cut as well. LED sources were more prevalent in the entries this year, although legacy sources still played a role where warm, high-CRI lighting was required. And compelling, innovative design concepts and implementation overshadow the products used in the projects. Adaptive and programmatic controls played a prominent part in several of the projects.

For background on the Source competition and a comparison with prior award winners, see our feature article on the program from 2013. The commercial entries this year feature arguably more dramatic projects and several notable outdoor lighting designs.

The top award winners include the Restoration Hardware building located in Boston, MA with design work done by Ross De Alessi Lighting Design of Seattle, WA; and the Morningstar residence located in Aspen, CO with design work done by Robert Singer & Associates of Basalt, CO. We found the Honorable Mention Nashville, TN Omni Hotel project, by GWA Lighting of Naberth, PA, very compelling - leading to its position on the cover of this issue. Moreover, Award of Recognition projects at the Los Angeles International (LAX) airport and the Cuyahoga County Public Library in Garfield Heights, OH were worthy recipients of recognition.

The Restoration Hardware entry was notable for the lighting design and its status as an iconic building along Boston's fashionable Newbury Street retail and restaurant district. The building originally housed the Museum of Natural History dating to 1863 and now serves as the flagship retail location for Restoration Hardware, yet it retains museum-like qualities indoors and out.

Indeed, the outdoor treatment is especially compelling. The designers stated the intent to create a "light from nowhere" effect on the building façade; as Fig. 1 illustrates, the mission was accomplished with all of the exterior fixtures concealed from view. On second floor ledges, Cooper io Line Series 2.0 symmetric luminaires, with a narrow beam distribution, ensure dark-sky compliance while grazing columns and highlighting cornices. Asymmetric versions of the fixtures on the second and third floors highlight balconies and windows while warmer IRiS P3LED sources inside make some of the merchandise visible from outside.

Moving to the residential winner, controls were a key part of the design story. The project implemented a whole-house dimming system. More significantly, the controls include preprogrammed scenes to allow the residents simple manipulation of the multiple layers of lighting used throughout. Each room includes a control panel allowing for scene selection or customized settings.

The nearby photo (Fig. 2) depicts the great room in the home. The steel fireplace was highlighted with vertical LED fixtures from behind, making the fireplace appear to float in space away from the stone wall. Uplights graze the stone from below while IRiS P3MR downlights highlight the upper portions of the wall and the seating areas.

Still, it was the Omni Hotel and Convention Center project that most impressed our staff despite not winning a top award from Cooper. In part, the broad scope of the hotel project is eye-catching because it includes design elements that could easily be present in a half-dozen compelling projects but in this case are part of a cohesive treatment for a number of different public spaces. Ironically, the project uses primarily incandescent sources. But the designers said that it still achieves 15% lower power density than typical similar projects by "putting light where it is needed and not where it isn't."

Given the Nashville location and the fact that the facility is connected to the Country Music Hall of Fame, the design sticks with a play on a musical theme throughout. Indeed, the cover photo depicts the lobby and what the designers termed the signature element of a ceiling meant to evoke the image of guitar frets. The chandelier in the foreground represents the guitar sound hole. Both fluorescent and LED sources were used for accent lighting.

The music theme extends into the dining and entertainment venues within the hotel. Fig. 3 depicts the entertainment bar with the lighting intended to provide an upscale "honky tonk" ambience. Hidden LED tape-light strips are integrated into the bar shelves to both highlight the displayed bottles and to add to the ambient lighting of the bar area. The same products were utilized under the front of the bar to highlight the area. Overhead, conventional PAR lamps light patron seating areas. Nearby, the restaurant steakhouse delivers a club-like but elegant ambience.

The project also utilizes a network and controls throughout the facility. Indeed, the design includes preprogrammed dimming scenes in all of the public spaces for different times of the day. Each area also includes local controls that can override the programmed settings. The controls were important both for guest comfort and a reduction in energy usage.

Moving to the two Awards of Recognition, each deserves attention for vastly different reasons. The LAX project in the curbside area of the Tom Bradley International Airport was designed by Horton Lees Brogden Lighting Design of Culver City, CA. The project includes LED-based light ribbons on canopies and the elevated roadway. But it's the sculptural roadway lighting that really stands out as both functional and artistic (Fig. 4).

The design team worked with Cooper to deliver a custom product with an asymmetrical look that delivers the required lighting to both upper and lower roadways. The team specified the custom fiberglass pole configurations and Y-shaped mounting arms to integrate Cooper Linear LED LightBAR modular light engines. The pole system doubles as a heat sink, and the result delivers the desired artistic look and what the designers termed a "swoosh of light."

Controls, meanwhile, were especially critical in the Cuyahoga library project designed by Tec Studio of Columbus, OH. The new 30,000-ft2 branch was designed for LEED (Leadership in Energy and Environmental Design) Silver certification and delivers baseline energy consumption that is 16% below energy code. The library expects even greater savings based on the controls implementation that includes an astronomical timeclock for programmatic controls, occupancy and vacancy sensors for autonomous controls, and daylight harvesting via the high windows and automated shades (Fig. 5).