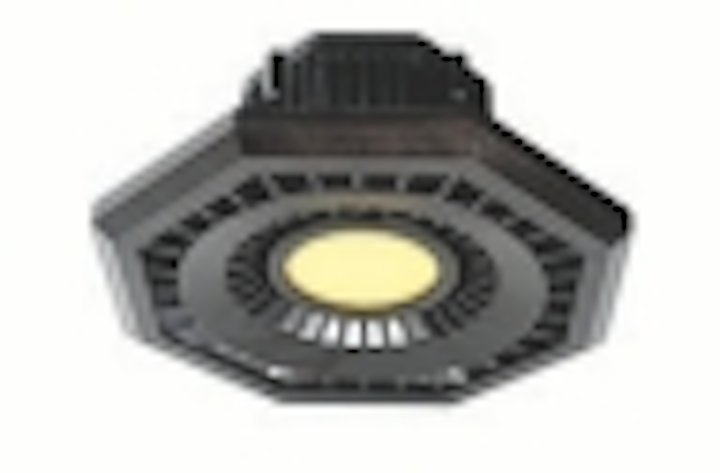 This article was published in the Winter 2013 issue of IIF Magazine.

View the Table of Contents and download the PDF file of the complete Winter 2013 issue, or view the E-zine version in your browser.

For many years, area lighting has been migrating to LED-based solid-state lighting (SSL) technology due to energy savings and reduced maintenance. The new technology offers a greater than 20% reduction in energy consumption over linear fluorescent systems and a more than 50% reduction over traditional high intensity discharge systems, making the total cost of ownership (TCO) very attractive to factory owners and local municipalities. Area lighting is now adopting a new and differentiating technology using remote phosphors, which improve system efficacy and lighting quality while simplifying the supply chain and lowering systems costs. These benefits all contribute to the lower TCO of the luminaires.

Area lighting, a general group encompassing canopy, high- and low-bay-, and outdoor parking lighting, is seeing the fastest rate of SSL system adoption due to the energy rebate incentives available from state and local municipalities. These luminaires typically use from 50 to 200 high power LEDs and project an average of 15,000 to 40,000 lm onto factory floors, warehouses, parking garages, and outdoor roadways. The TCO of these luminaires, including fixture costs as well as operating and maintenance costs, is the key advantage and selling point in this industry. Other features required are low glare, maximum efficacy and lumen output, and a high quality of light. In terms of quality of light, typical applications require tight spectral control delivering color consistency within 3 MacAdam ellipses or SDCM (standard deviation of color mixing), superior color over angle, and high CRIs.

Remote phosphor benefits
Direct phosphor-converted LEDs have the phosphor material in direct contact with the LED chip, which results in package-related photon losses due to scattering and reabsorption. The phosphor heats up during the blue-to-white conversion process, adding additional heat load to the LED and raising the overall temperature of the subsystem. This decreases reliability, increases color shift over time, and reduces lifetime to L70 (the point at which the luminaire produces only 70% of its initial lumen putput).

Alternatively, remote phosphor removes the heat away from the blue LED, resulting in a balanced and more uniform thermal distribution at the system level. The thermal advantage, combined with the reduced scattering and reabsorption into the LED chip, results in a 15 to 20% performance improvement at the system level. White LEDs often use diffusers to homogenize the white light emission. Remote phosphor is a diffuse Lambertian source, which eliminates the need for a diffuser at the system level. This amounts to another 10% gain in optical efficiency, for an overall 30% gain in system efficacy.

Many companies are rapidly developing high-efficacy systems around remote phosphor, but Horner ETG, a division of Horner APG (Indianapolis, IN), seems to be in the lead with an entire product line based upon the technology. Horner has benefited from close to 30% efficacy gains over traditional white LEDs and has realized significant cost savings due to the reduced number of required LEDs and materials for the heat sink. Clay Warren, sales representative at Horner ETG contends, “The total cost of ownership of our systems, enabled by Intematix remote phosphor, has allowed us to win some significant contracts over some of the most established players in this market.”

Horner has also been able to simplify its supply chain by using only two bins of royal blue LEDs and not having to carefully select from the wide range of white LEDs on the market. Horner now offers the C-80 (formerly called Surpass) high-bay products (Fig. 1) from 10,000-40,000 lm for indoor warehouse applications as well as outdoor parking facilities at an attractive price point. Horner also offers the A-200 street light (Fig. 2), among other products based on remote phosphor, and the A-200 was announced by the US Department of Energy as a recognized winner in the 2012 Next Generation Luminaires competition. See pg 14 for more information on that competition.

Horner chose to use the ChromaLit XT glass remote phosphor solution from Intematix (Fremont, CA). Intematix is a supplier of phosphors to the major LED manufacturers worldwide and has been a leading supplier of remote phosphor solutions for the past three years. The ChromaLit family includes optics made of a variety of materials and in flat and 3-D shapes, all coated with phosphor.

Remote phosphors in high-bay and area lighting can deliver a better quality of light, selectable CCTs and CRIs, a simplified supply chain, a boost in efficacy (lm/W), improved color over angle, and lower overall system costs.

Royal blue LEDs trump white
Remote phosphors provide a quality white light output when used in conjunction with royal blue LEDs at an average dominant wavelength input of 455 nm. The phosphors deposited on the glass or polycarbonate substrate become the light source with the LED providing the energy. This high quality diffuse light source is low glare and does not provide the hot spots associated with white LEDs in many luminaires. Suppliers of remote phosphor technology can also guarantee very tight control over the output and specify 3 SDCM distributions across panels, resulting in superior luminaire-to-luminaire consistency.

The key to efficacy improvement with remote phosphor is the LED system’s ability to recycle the blue photons that would inevitably be lost in a white LED system where the phosphor is deposited directly onto the LED. As shown in Fig. 3, the mixing chamber design is critical to the performance increase as it allows the reflected photons to be recycled and ultimately extracted through the remote phosphor. This system also allows the LEDs to run cooler because the heat transfer associated with the blue-to-white conversion is removed from the source. Luminaire designers are able to save system costs by taking advantage of the higher efficacy achieved in remote phosphor systems. They can eliminate LEDs and drive their LEDs harder or, alternatively, they can use smaller heat sinks and save money on material costs.

Remote phosphor systems can be selected to meet CRIs required from the 70s up to the high 90s based upon the application. This, combined with a simple CCT bin system, greatly simplifies both the design process and the manufacturing supply chain. A common royal blue LED fixture design can enable many SKUs (stock keeping units) or models of luminaires just by changing out the remote phosphor plate prior to shipping.

Most of the major LED manufacturers are now providing royal blue offerings in their portfolio, including Philips Lumileds, Cree, and Osram Opto Semiconductors. Lower cost Asian suppliers, such as Lumenmax, Lumens, and Refond are also entering this market. Royal blue LEDs are now offered at a discount to typical white LEDs as their volumes are increasing and fewer steps are required in the manufacturing process.

Overall, the total system costs associated with remote phosphor are less than those using traditional white LEDs. In a recent test case, Intematix witnessed a high-bay design requiring 7000 lm in which engineers swapped out white Lumileds Rebel ES LEDs and replaced them with royal blue Rebel ES LEDs. The engineers also improved the reflective properties of the mixing chamber using white optical reflective materials. The results were an astounding decrease in number of LEDs from 60 to 28 that were required to hit the target output, an increase in efficacy from 85 to 96 lm/W, and a decrease in system cost from $74 to $58.

Success stories
Remote-phosphor technology is also emerging in other applications requiring high lumen output. For example, Production Resource Group (PRG) is using the technology in its products built for broadcast-studio and cinematic lighting. PRG announced the Trucolor HS product a year ago, and it was used in broadcast studios at the 2012 Olympic Games in London. The 400W remote-phosphor design delivers 20,000 lm — two times the light output of a traditional 2000W tungsten incandescent bulb.

Intematix developed custom remote phosphor CCTs for the film and broadcast industry and was also able to produce CRIs in the high 90s to meet the needs of PRG. Steve Brill, president of the Lighting Design Group in New York who used the Trucolor HS at the Wimbledon tennis tournament last summer, commented on the Trucolor HS fixture: “One of the challenges with LED fixtures has always been intensity and color. This fixture is actually significantly brighter than the tungsten fixture it replaces, and both the color temperature and color rendering index are excellent.”

While we have focused on some specific high-output applications in this article, remote phosphor is being used in all areas of general illumination including retrofit lamps, downlights, and undercabinet and decorative fixtures. But the technology really showcases its value in area lighting, where it can significantly reduce the number of LEDs required in the system. Lighting designers are quickly finding the most effective way to achieve higher efficacy and lower system costs is to utilize the benefits provided by remote phosphor. Area lighting and systems with high lumen requirements achieve optimal results, but the value proposition is applicable from 1000–4000 lm downlights up to high bay and canopy luminaires requiring 40,000 lm and above.