Within its Lighting business sector, LED-based products exceeded 10% of sales for Philips during the last quarter of 2009. 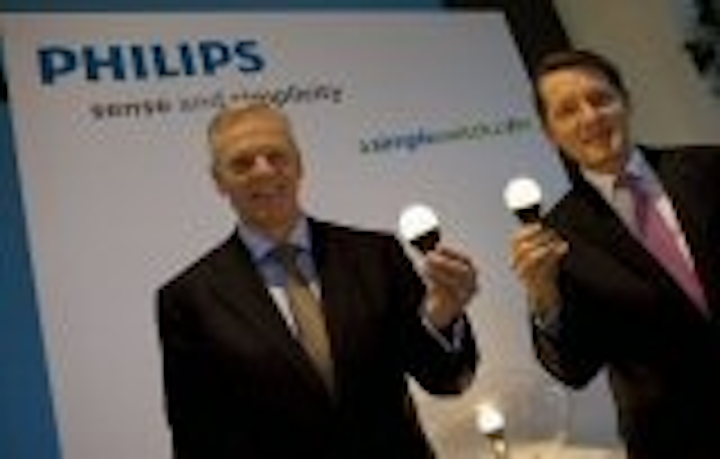 LED-based products exceeded 10% of Philips' total sales within the Lighting business sector, the company said when announcing its results for the fourth quarter of 2009.

Gerard Kleisterlee, president and CEO of Royal Philips Electronics , said that the company is "more than ready for the transition to even more versatile and energy-efficient LEDs and other forms of solid-state lighting."

Sales in the Lighting business sector declined from EUR1.939 billion in Q4 2008 to EUR1.846 billion in Q4 in 2009, although Philips said that the figures effectively showed no change on a comparable basis (i.e. excluding the effects of currency movements and changes in portfolio). However, full-year sales for 2009 were EUR6.546 billion, down 13% on a comparable basis.

Kleisterlee said “The Lighting sector continued on its road to recovery with strongly improved earnings and rebounding sales even though the commercial construction market continued to be in decline; and for the first time, LED-based products exceeded 10% of total sector sales.”

"In the last quarter of 2009, sales in emerging markets, in Lumileds [Philips' LED-making subsidiary] and in automotive were much higher than in Q4 2008, while Lamps enjoyed excellent growth, driven by the demand for energy efficiency," said Kleisterlee.

Philips Lighting claims to be the global leader in lamps, but also "in the sectors that matter most going forward," namely energy-efficient lighting, professional luminaires, LED-based products and applications, and automotive.

Kleisterlee said that Philips is "increasingly offering complete lighting solutions as opposed to lighting products, and that is precisely where the market value will be in the future."

He also said that Philips "will endeavor to optimize our manufacturing and supply structures during the transition from the traditional incandescent lightbulb to more energy efficient lighting solutions."