LTP and Color Kinetics light up the Pru

An atrium filled with bubble tanks provides a unique architectural feature in the HQ of Prudential Assurance. 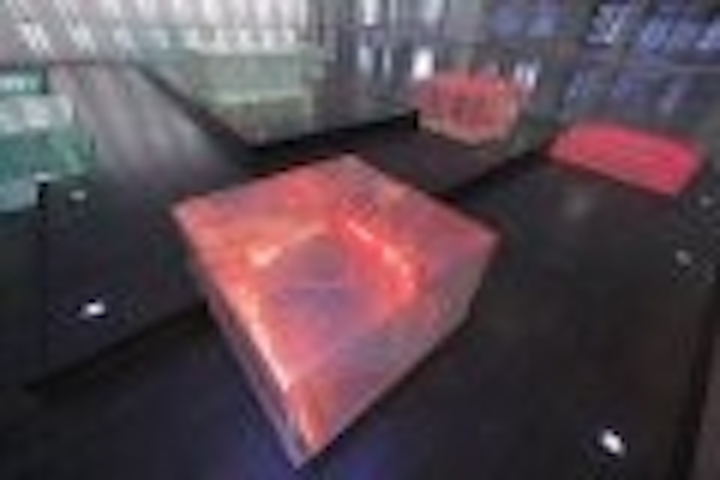 Architectural and feature lighting specialists LTP has supplied nearly 300 Color Kinetics LED fixtures for a lighting installation in the atrium of City Place House, the London HQ of Prudential Assurance. The lighting feature, which involves the up-lighting of 10 various sized bubble tanks, was created by architect/designers Natalia Kudriavtseva with Sean Mahoney of Hoare Lee, and specified by LTP after referral from Architainment, CK’s UK distributor.

LTP’s project manager Terry Reeves chose 92 pieces of Colour Kinetics Cove MX to up-light the tanks, chosen for their optical qualities as well as their practicality when it came to the actual installation. These are installed below each tank.

The top of the atrium is glass panelled, and therefore filled with daylight for most of the year, so any lighting had to be exceptionally bright to hold its own.

The MX is a Powercore fixture which requires only a data enabler at the start of the run with a 230V power feed and the control input from a DMX device. This sends out a single four core cable passing through each MX fixture delivering unified mains power and data for up to 90 fixtures.

This neatly deals with the issues of running power and data to inaccessibly located fixtures, cutting the need for any subsequent power supplies along the way, saving costs to the client and also ensuring a highly efficient installation process

The MX fixture digitally transforms the 230V down to 24V. Through Chromasic technology, (i.e. the onboard processor used in each fixture) smart addressing is possible for the fast uploading of ID tagging through the data enabler, without the need to handle each fixture individually.

Aesthetically, the bubbling, colour-changing tanks create an engaging atmosphere of calmness and serenity. They transform what would normally be a cold and potentially imposing space into an inviting, accessible area in which to chill and reflect, juxtaposed against the constant hubbub and freneticism of City life and work.

The lighting, combined with effervescing motion of the water produces some interacting colour and optical aberrations and effects. The atrium tanks can be viewed from the open landings of 10 storeys of the building, each one producing a different experience as altitude is integrated into the visual equation.

Additionally, LTP supplied 190 Color Kinetics Cove QL fixtures to provide low level ambient ‘relief’ lighting around the edge of a 30 metre high screen with custom built baffles, which acts as a backdrop to the installation. This traverses the atrium’s 10 stories.

Overall lighting control is via the compact CK iPlayer 2, which offers local control of eight pre-programmed states, with a BMS (Building Management System) external trigger made available from the serial port.

LTP’s Terry Reeves states, “As a project based company dealing primarily with functional architectural lighting, getting the chance to work on a purely artistic lighting scheme with such a prominent client was fantastic. We look forward to working with the design team again in the future.”