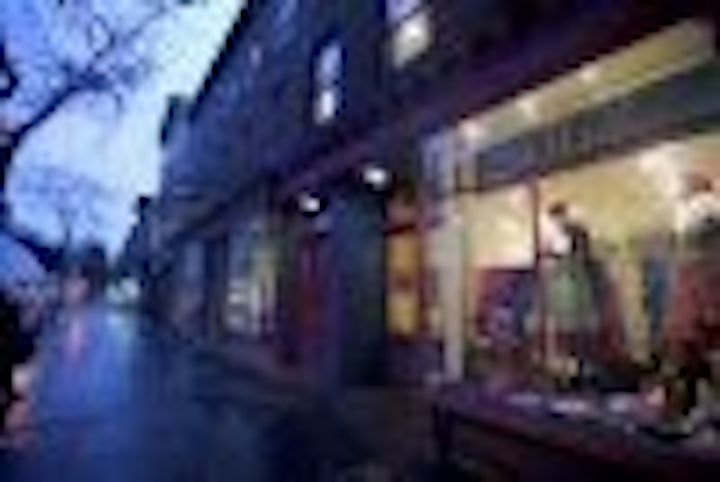 A series of 13 LED-based lighting fixtures, using DRAGON® Tape hi-flux LED and ballast systems donated by OSRAM SYLVANIA, have been installed in 8 shop and apartment doorways on Atlantic Avenue between Hoyt and Bond streets, in the Brooklyn borough of New York.

The lighting program was conceived and managed by lighting artist Leni Schwendinger of Light Projects, Ltd., who identified LED fixtures located in doorways as the ideal way to achieve the desired light pattern. "We wanted to light the doorway and the sidewalk, with the light tapering off towards the curb," says Schwendinger. "When you look down the street, each doorway appears as a kind of illuminated welcome mat."

Although the fixtures are operated by individual business owners, the aim is to provide a benefit for the community as a whole. "Each single gesture, multiplied by many, creates a public amenity," says Schwendinger.

The Atlantic Avenue Local Development Corporation (LDC), who commissioned the lighting installation, is currently identifying additional funding sources to extend the installation over a two-year period to 150 doorways (or the entire length of Atlantic Avenue). The LDC is subsidizing the cost of the fixtures and the installation, so that property owners will benefit from a reduced electricity cost, possibly as much as 80% lower, incurred by running the LED-based lighting.

The desire on the part of the LDC for an energy-efficient lighting solution, and other factors, resulted in the selection of LEDs as the light source. "We looked at other light sources but all the others were too big and not well-shaped for the kind of small lighting fixture we wanted," says Schwendinger. "LEDs are miniaturized, and SYLVANIA had just produced a 1 W device and was very positive about being involved in the project."

SYLVANIA specifically created and donated a number of DRAGON Tape hi-flux LED and ballast systems to the project. Each fixture is built around 3 DRAGON Tapes, which contain six 1W Golden DRAGON LEDs produced by OSRAM Opto Semiconductors. The LEDs are operated at 1W, which is below their maximum output, in order to ensure that the lifetime of the fixtures should approach the 100,000 hour mark.

The fixtures were engineered and manufactured by DesignPlan, and have a single optical cover, which was found to work better than individual lenses. "By working on the lens design, we were able to reduce glare from the fixtures," says Schwendinger. "You can look into the fixture and see the individual points of light, which is absolutely unexpected."

According to SYLVANIA's Ron O'Brien, LED-based lighting offered many advantages for this project. "LEDs provide energy efficiency, using very little electricity, and require no maintenance," he says. "They're robust and can endure an outside setting where they might encounter vandalism.”

Furthermore, the optical system allows an even distribution of light. "The bulk of the illumination is deflected downward and outward from the building, which provides a lighting pattern to illuminate the areas occupied by pedestrians," he says.

O'Brien's company has experienced the effect of lighting on public attitudes and behaviors. "We noticed a very strong reaction, and increased public traffic to the Thomas Jefferson Memorial in Washington, DC after we completed the relighting of the memorial, and where the north-facing steps and the edifice were illuminated for the first time," said O'Brien. "This provided evidence that if you introduce lighting as one of the elements of the landscape you can influence human behavior."

Schwendinger hopes to see an equivalent response on Atlantic Avenue. "The project is undergoing an evaluation period, in parallel with fundraising," she says. "We'll be assessing issues such as: how does the light look; are we getting the foot-candles we need; and what is the public response." Other issues include how the LED light sources sit with the numerous mercury lamps already on the street.

Schwendinger thinks that the Atlantic Avenue pilot program can be replicated and sets a bold direction for bringing life to streetscapes throughout the U.S. "Just as LEDs are the future of lighting and energy efficiency, so new programs and approaches to lighting design are the future for cities," she says. "With this project, I hope we will inspire designers and urban planners to think in new ways about lighting, based on how the user and city visitor is affected by light."