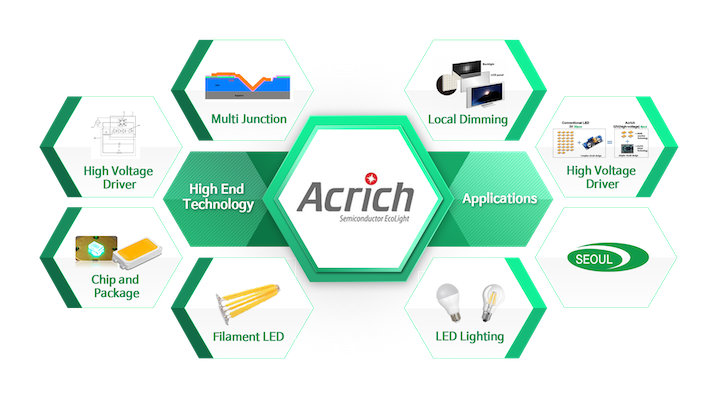 In the lawsuits, Archipelago acknowledged that LED components used in its LED light bulbs were manufactured by several third party suppliers. Although Archipelago had no knowledge of any Seoul Semiconductor patents, or the possibility of infringement, Archipelago did not dispute that the LED light bulbs in question infringed Seoul Semiconductor’s patents. Archipelago also did not dispute the validity of the relevant Seoul Semiconductor’s patents and agreed to pay a license fee in order to affirm its commitment to respecting the intellectual property rights of others. Based upon these admissions, the California Central district court entered judgments in favor of Seoul in these cases. Seoul’s asserted patents include technologies for LED drivers for high-voltage operations, Acrich MJT (multi junction technology – over 6V high power chip), filament LED bulb structures, LED packaging, LED epitaxial growth, and LED chip fabrication.

Seoul is the pioneer of the Acrich technology that enables high-voltage operation with a high power output using only a small number of LED units. Specifically, Acrich technology utilizes proprietary LED driver technology to enable high-voltage operation, as well as proprietary MJT technology for mounting and integrating many LEDs within a small area. This maximizes the available space in LED products and power efficiency by 20%, facilitating a simple circuit design and significantly reducing the size and cost of LED products.

Nam Ki-bum, Executive Vice President of the Lighting Department at Seoul Semiconductor, said, “While Seoul will continue enforcement actions to prevent unauthorized use of Acrich technology, we will offer a license program with reasonable terms for companies that recognize and respect the value of Acrich technology. This will promote the distribution of innovative technology products in the market.” He added, “For young entrepreneurs and small entities that wish to pursue technology innovation, this will help them achieve business success, while Seoul continuously works to encourage a fair competition market where intellectual property rights are respected.”