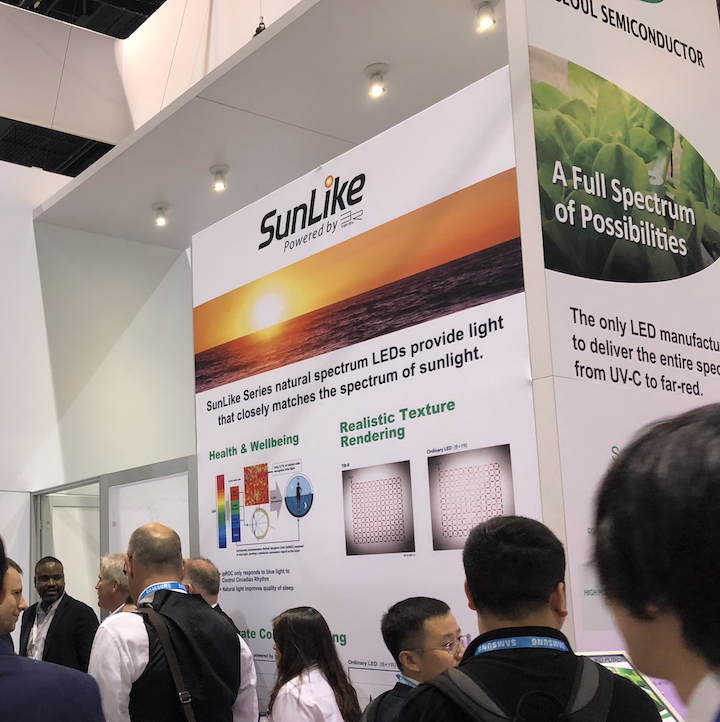 PHILADELPHIA (MAY 13, 2019) - Seoul Semiconductor, a leading global innovator of LED products and technology, is a sponsor and exhibitor at LIGHTFAIR International 2019, scheduled for May 19 – 23 at the Philadelphia Convention Center in Philadelphia, PA. Seoul Semiconductor will exhibit in Booth #3101, and is sponsoring the LFI2019 “My Headshot” lounge, where all attendees can receive a professionally photographed portrait, illuminated by SunLike Series natural spectrum LEDs in Booth #5734.

“An important part of the annual LIGHTFAIR conference is the opportunity to advance the state of the art in lighting technology and establish standards and metrics that accurately measure lighting performance,” said Mark McClear, Seoul Semiconductor executive vice president for North America. “As part of Seoul’s ongoing support in this area, Dr. Octavio Perez, of NYC’s Mount Sinai Hospital is delivering a three-hour workshop giving LIGHTFAIR attendees the opportunity to ‘Become an Expert in Melanopic Stimulus Measurement & Improvement.’ Dr. Perez will available by appointment at Seoul Semiconductor booth during LightFair to assist our customers in better understanding new metrics in human centric lighting and SunLike performance.”

The interactive workshop, scheduled for Sunday, May 19 from 9am to 12noon, promises to provide a detailed understanding of the recently-introduced international standard CIE DIS 026/E:2018 “CIE System for Metrology of Optical Radiation for ipRGC-Influenced Responses to Light.” Participants will do real-world, hands-on characterization and measurement of melanopic stimulus through the use of M-EDI (D65) and the equivalent melanopic lux (EML), an alternate metric that is weighted toward the eyes’ non-image-forming receptors – intrinsically photosensitive Retinal Ganglion Cells (ipRGCs) – instead of conventional lux which are weighted to the eyes’ visual photoreceptors. Participants in the workshop will receive three continuing education units (CEUs).

“LIGHTFAIR is a premier annual event for the global lighting and technology industry in North America, providing an ideal venue for us to showcase our latest LED innovations and meet with our customers,” McClear added.

Exhibiting together with Seoul at LIGHTFAIR is Sensor Electronics Technology, Inc, (SETi), a division of Seoul Semiconductor and Seoul Viosys, and a global innovator of UV LED products and technology. They will showcase the LED industry’s first product line encompassing the entire UV spectrum from 225nm to 405nm, developed for a range of applications, including horticultural lighting to enhance plant growth cycles and control diseases.

“The week prior to LIGHTFAIR, we are sponsoring a webinar on the use of UV-B LEDs to increase secondary plant metabolites, increase resiliency to powdery mildew and mold, and extend the post-harvest shelf life of produce,” explained Dr. Peter Barber, director of business development for SETi and Seoul Viosys in the Americas. The one-hour webinar, entitled "Next Evolution in Horticulture Lighting," is scheduled for Thursday, May 14 at 2pm EST, and registration is free.