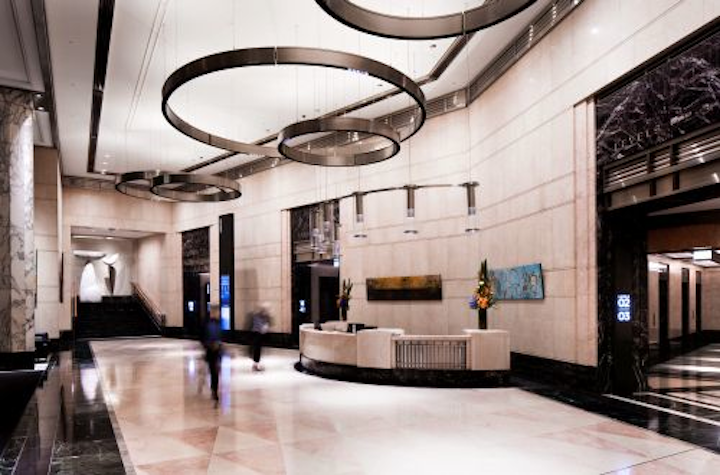 Design firm PointofView uses LEDs and daylighting in Sydney architectural lighting project
When award winning and highly regarded Australian lighting design consultancy PointOfView was briefed to relight the lobby and satellite lobbies of Chifley Tower, Sydney, it was faced with one major consideration. 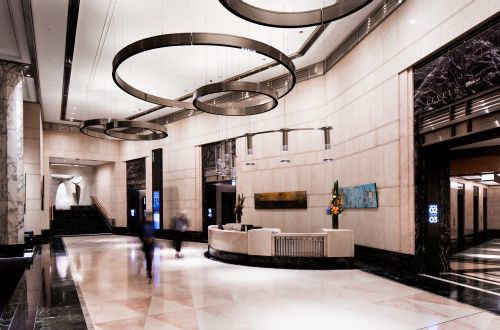 How to redress a once iconic Sydney landmark to give it new standing in the 21st century while only changing the lobby lighting.

The building was much admired by the legal eagles, bankers, bondsmen, traders, developers and entrepreneurs who passed through its imposing entrance every day of the week. But even they, when pressed could be heard to admit they thought it was looking, "a little tired".

Chifley Tower is located on one of Sydney's most expensive sites, (no mean feat in a city not short uber expensive sky scraper launching pads). The now defunct Bond Corporation paid $306 million for it in 1988 enticed no doubt by its elevated position and 'never to be built out' views.

Renowned New York architects Kohn Pederson Fox were responsible for its design and would have drawn immense satisfaction from the comparisons it elicited with a number of the world's truly great buildings including the Chrysler and Empire State in New York and Petronas Towers in Kuala Lumpur. It simply oozed luxury and opulence from every panel as its footprint graciously followed the curvature of the Parisian style square it so regally dominated.

It was a fabulous building, but like all of us, was now, showing its age.

PointOfView were engaged by the current owners GIC Private Limited, with whom they had recently worked successfully on lighting the exterior of No 1 Martin Place.

"Chifley Tower has such a strong aesthetic," said Mark Elliott, Principal of PointOfView, "it required not only sensational lighting to rejuvenate it, we designed the fittings to light it with. A totally bespoke solution." The initiation of concepts began with round after round of thorough research into the development of other respected, art deco buildings including the Chrysler, searching for the inspiration that would help move Chifley Tower well and truly into the 21st Century and cement its credentials as a premier building long into the future.

The palette of materials used in the foyer in the original KPF design included a collage of exquisite stones, marbles and granites, with stainless steel detailing. "We had to freshen the space during the day," said Elliott, "to enhance the daylight ingress, while at the same time creating a much more dramatic, after dark appearance. It can not be too strongly stated that whatever we designed, had to match perfectly, the existing architecture."

"Fundamental to the design of this bespoke lighting solution was understanding the scale, proportion and detailing of the building. We couldn't create the relevant symmetry or rhythm without utilizing this language," added Amara Clarke, Senior Designer at PointOfView.

"We washed the foyer's rear wall to draw the eye through the full height of the glazing and into the interior. By bouncing light off the walls we dramatically lit the space and together with up lighting to the ceiling, created a sense of volume." continued Elliott.

Existing, suspended square light fixtures in the wing shaped lobby were felt to be under scaled and awkward. PointOfView custom designed a series of stainless steel rings to provide up light to the ceiling during the day and focused down light at night. It was so critical to match the materiality of the custom fittings to the existing stainless steel detail that the grade of the steel and the weight and direction of the brushing was tested until a perfect match was found. A custom cluster of pendants was designed and suspended over the reception desk to anchor it and give visitors a point of destination.

"The lift lobbies suffered from a 'cave effect," said Elliott, "Previous wall light and down light combinations had left the space unacceptably dark. Lift lobbies are a critical part of the journey through to the offices above. These transition spaces should not be forgotten."

A new, architecturally integrated stainless steel beam was strapped through the lift lobbies to connect existing lateral beams. The new beam housed up lighting to lift the ceiling and wash light across the stone wall cladding while down lighting enhanced the diamond pattern in the stone floors.

The upgrade of Chifley Tower relied entirely on lighting. "This kind of solution can only be achieved through custom designed solutions," said Elliott. "The work we pride ourselves on." "We light spaces, but we also create beautiful objects to light from." "This project demonstrates the effect a lighting designer alone can have on dramatically changing a space."

Naturally, the aesthetics achieved at Chifley Tower did not come at the expense of sustainable design technologies. LED and lighting control systems harvest daylight and ensure the transition from day to night mode is energy efficient. The real savings gained were on the high side of impressive - up to 382%

"It's amazing to see the change in architecture from the eighties to today," said Elliott. "But KPF are great architects, and great architecture always stands the test of time. It just took a lighting face lift, albeit a very well considered bespoke one, to bring this gem back to life"

PointOfView has offices in Sydney and Melbourne and is currently working with KPF (original architects of Chifley Tower) on two projects in India.