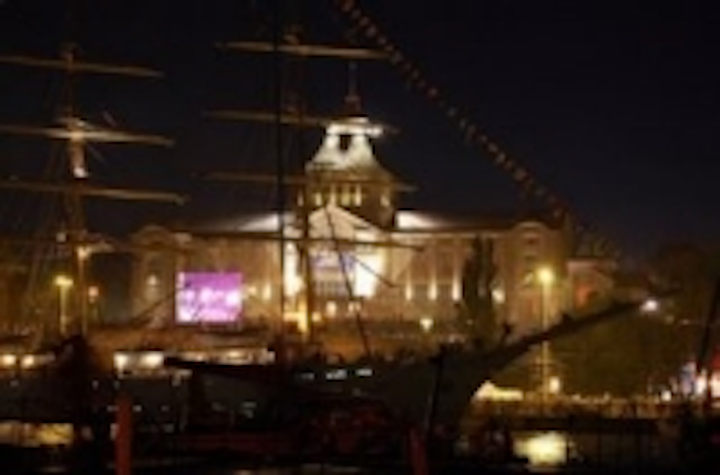 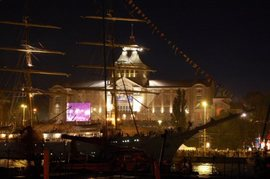 
Hong Kong –- Throughout July and early August, the Baltic sea was home to one of the most spectacular annual maritime events, the Tall Ships Race. Starting at the Danish port of Århus, the ships sailed to Kotka in Finland, then the Swedish capital Stockholm, before finishing the season at Szczecin in Poland, where two large Lighthouse LED screens were in place to greet the ships and their crews.

“According to one popular Polish saying ‘It's not necessary for a man to eat, but to sail - it is!’" laughs Rafael Kociemski of Polish screen company Wizja Sp. “That is how important an event the Tall Ships is to Szczecin.”

Proof of this was provided by a crowd of 1.5 million which came to admire the ships in Szczecin harbour between the 4th and 7th of August, making it the largest Polish outdoor event of 2007. In total over 200 ships took part, accompanied by a wide variety of other attractions, performances and concerts, which took place on a number of stages around the harbour.

Such an array of visual delights was on offer for the sailing enthusiasts that having giant screens was essential to enable so many people to enjoy all the sights.

Medialne Narzedzie LED Consulting, a joint venture between Wizja and Austrian company WMW LED Consulting, installed two Lighthouse LED screens - comprising 49 panels of R12 and 81 panel of R19 respectively - which showed a wide variety of footage, from the live concerts to pre-recorded advertisements, promotional clips and also live footage from cameras installed in a variety of locations along the route as the ships neared their destination. The farthest of these was located 80km away, on a lighthouse at the mouth of the Odra river, up which the ships sailed to reach Szczecin.

The main circulation area of the event was the area between the harbour and the imposing Theatre Wspólczesny building and it was here that the Lighthouse screens were erected, back-to-back. The larger screen faced the river, enabling those on the ships and on Grodzka Island opposite to also enjoy the moving images.

With the organisation taking six months, this was a major event for Medialne Narzedzie. “Although we have many years experience in providing LED screens for events, the site provided quite a challenge,” says Medialne Narzedzie’s Tomasz Wysocki. “Mounting the screens required a crane with a 60m jib and there are only a few such cranes in Poland.

“It then took our several dozen-strong specialist team 24 hours to erect the screens, which says a lot about the scale and difficulty of the project. But we are very proud of being part of such a giant event and we were very happy with the result. The quality of the Lighthouse screens was obvious for all to see and it proved once again that our investment in Lighthouse products was an excellent one.”

Lighthouse Technologies Limited is a leading LED technology developer, manufacturer and global supplier of state-of-the-art LED modular video panels, which can be assembled into large scale video screens for indoor and outdoor use. Specializing in the research and manufacture of LED video screens, Lighthouse has its own intellectual properties with more than 10 active patents worldwide and is committed to remain as the premier creator of intellectual property value.

The company’s LED components, panels and complete video systems undergo stringent quality control with power-on, burn-in processes at ISO9000-certified manufacturing plants. Its products have won several international awards, among them, the Best New Product Award at the National Association of Broadcasters (NAB) show in 2002 and the Buzz of the Show award at InfoComm 2004 in Atlanta, 2005 IBC Exhibition Design Award the Technological Achievement Certificate of Merit in the 2003 Hong Kong Awards for Industry as well as the prestigious Consumer Product Design Award and the HKITCC Certificate of Merit in Technological Achievement in the 1999 Hong Kong Awards for Industry. Lighthouse was also recognized as one of the Fastest Growing Technology Companies in the 2002 Deloitte Technology Fast 250.