ESL provides Isis with glitz opposite the Ritz 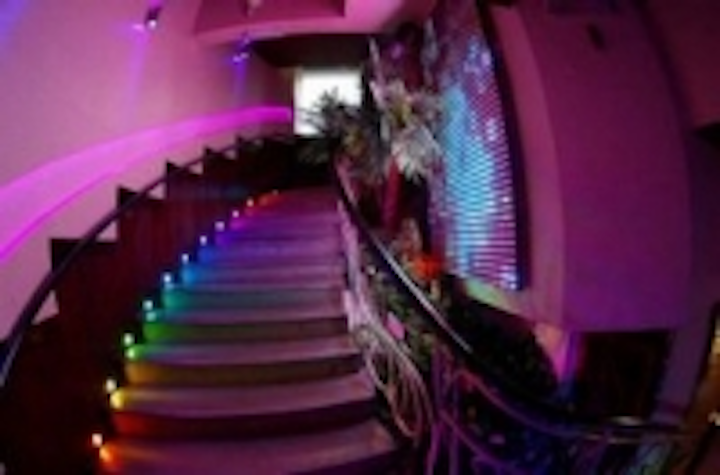 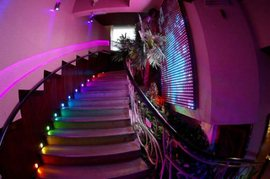 An exclusive Lebanese nightclub/restaurant, occupying the prime site corner of Mayfair’s Dover Street and Piccadilly (opposite the Ritz Hotel), has undergone a complete lighting makeover under the inspiration of Essex Sound & Light.

But having obtained a 6am licence two years ago, owner Wahid Makhaiel also needed to be assured that this remarkable installation would pass the durability test, since it would need to function over long duty cycles.

The brief handed to ESL’s Mike Glover and lighting programmer Bob Calvert was to provide a coruscating interior based around an animated LED graphics wall, supported by concealed RGB edge-lit LED ‘tape’ and classic MR16’s providing the LED spot effects.

To deliver this solution the designers have specified Pulsar Chroma MR16’s, Malham’s discreet strips of tiny SMD LED’s, which curve like a flexible PCB, and the dynamic new X-Panels from Lighting Effects Distribution.

Some 236 of the 200mm x 200mm graphic X-Panels adorn the stairway and facing walls of the nightclub, under the control of a Green Hippo Hippotizer V3. This latest version of the popular media server includes on-board, timeline-based, programming and control triggered from all major industry protocols.

According to Bob Calvert, “its flexibility, power and quality of the imaging are superior while the new version offers increased functionality and more FX.”

As for X-Panel, this sees the convergence of light and video in a colourful and interactive backdrop. Users can combine video with text, or still images with animated cartoons to create a mesmerising effect. Each tile is equipped with 25 high intensity RGB LEDs and the system supports more than ten types of software.

Bob Calvert has placed all the lighting under the command of a ShowCAD Artist. The wall address is via a VGA/DVI signal passed through the Hippotizer, where it is sampled and pixel-mapped to DMX for the panels; user control of the Hippotizer comes from the ShowCAD, integrating the video in with the rest of the lighting effects.

The lighting architecture has been constructed around a massive 25 DMX universes (in view of their RGB mix, the largest X-Panel wall alone requires 16). The fact that all the conventional automated fixtures and moving heads are now able to be retired will result in the installation drawing just 10 amps of power, with extremely low maintenance.

Above the terracotta floor, two heavily-sashed domes (resembling artichoke hearts) are highlighted with the Malham LED tape, and decorated with fibre optic mini chandeliers, supplied by ESL, while the cocktail bar ceiling has been drilled through to allow recessed fibre optic sources to create a twinkling night sky.

However, the greatest achievement is the swirling entrance staircase, providing a magical journey down into the basement past another 10 x 8 X-Panel, glowing Malham tape uplighters and a series of MR16’s in custom chrome ‘cans’ fabricated by ESL’s engineering department. Since each MR16 on the stair treads is assigned its own channel it is possible to generate any colour. LED tape is also used to backlight the austere but ornate dark wood support columns.

Vital to the whole operation and changing tapestry of the venue, is the easy-to-navigate, mouse-driven ShowCAD GUI — with a series of presets, programmed by Bob Calvert to provide dynamic cue sequences.

Preview monitors on the Hippotizer screen show the upcoming effect and the Hippotizer itself is preloaded with various media clips, which are recalled by ShowCAD.

Because the configurable panels will produce unconventional aspect ratios the correct choice of content is paramount to prevent the image looking twisted and crooked; according to Bob Calvert. Hippotizer enables this to be achieved by cropping, stretching or compressing the image in the software.

On the audio front the new DJ booth features a pair of Pioneer CDJ-1000’s and Allen & Heath Xone:62 mixer feeding a pre-existing Funktion One RES-2 and Electro-Voice system.

Summing up, ESL’s Mike Glover says, “This installation is indicative of the current state-of-the-art in LED technology — but the secret of this success is in the advanced programming and ease of operation.

“The fact that the entire installation draws just 10 amps and that an animated environment can entirely render conventional fixtures obsolete says much about the innovative effects we have used, coupled with low maintenance and running costs.”