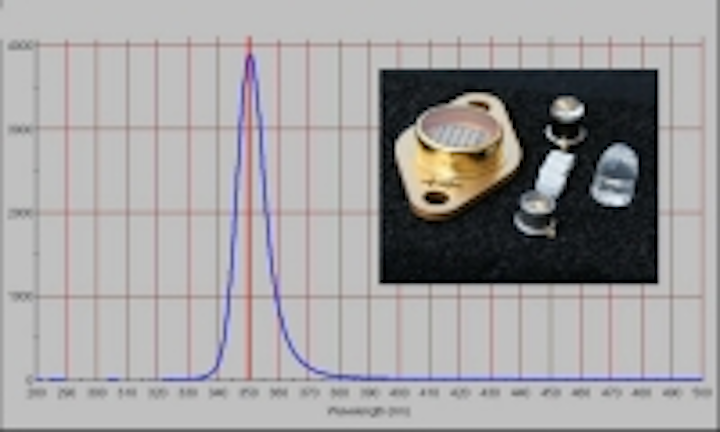 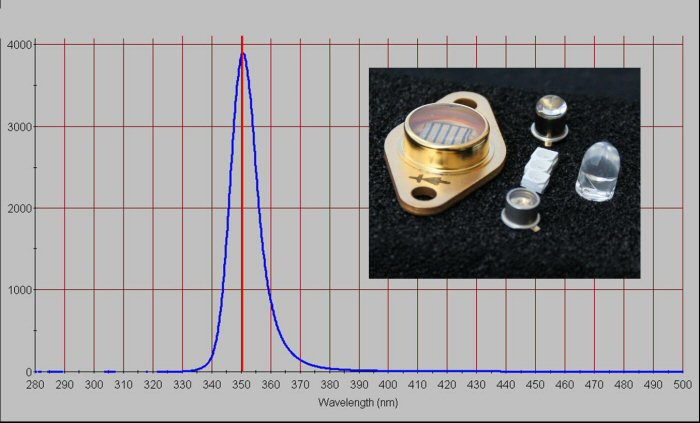 The Fox Group, Inc. is pleased to announce the availability of its new 350nm UV LEDs. These LEDs, which have a peak wavelength of 350nm, are now offered in several forms:

The FoxUV™ 350nm LEDs have a typical peak wavelength of 351nm (at 20mA) with a FWHM spectral width of about 10nm. As with all Fox Group LEDs, the wavelength of these new UV LEDs is extremely consistent: typically +/-1nm. The wavelength is also highly stable with changes in forward current. This exceptional consistency and stability is achieved with Fox Group’s exclusive, proprietary, patented FoxHVPE™ epitaxy process, which features excellent uniformity.

These new, 350nm UV LEDs have an average output power of greater than 200 microwatts at 20mA at a forward voltage of approximately 4.5V, and a robust 500 microwatts at 50mA drive current.

Applications for FoxUV™ 350nm LEDs include:

• Medical and biomedical applications; including blood serum analysis
• Sensors of materials with fluorescence response in 350-355nm range
• Fluorescence “disclosing” and specialized inspection lamps
• Scientific and other applications where absorption or response at 350-355nm is required

UV LEDs present a risk of eye damage because most of their radiation emission is invisible to humans (below ~380 nm). Therefore users should take appropriate precautions, especially for applications by or near persons who would not be aware of the potential danger, and most especially for use near children and pets.