XL Video continues with the Kings 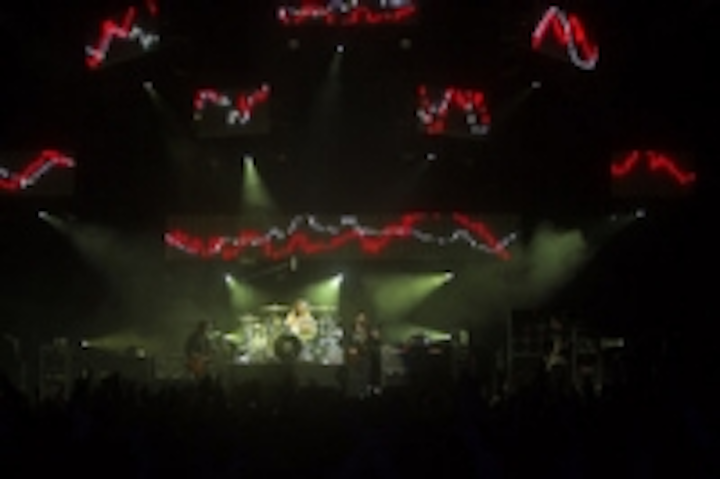 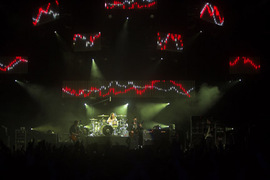 XL Video UK is supplying MiTrix screens, 290 HD VersaTUBES, cameras/PPU, Catalyst digital media servers and crew to the Kings of Leon “Only By The Night” tour.

It follows XL’s work with the band throughout 2006 and 2007, and is project managed for XL by Des Fallon. He comments, “Once again the Kings of Leon’s show pushes all the creative boundaries and is an exciting fusion of video, digital and conventional lighting working together for provocative results. It’s also great to be back on the road with tour manager Ivan Kushlick and his team.”

Unusually, Woodhead is mixing from the FOH rather than the traditional backstage position.

With him, Bale and Haynes working as an integrated visuals team, at the start of the tour it made sense for the 3 of them to be in close physical proximity to enhance the visual synergy and inter-communications. This approach is a progression to the workflow that evolved on the 2007 tour, and it’s also logical for the video director to see the show from the audience’s perspective. Woodhead is finding it an enjoyable, rewarding way of live mixing which brings an additional dimension and resonance to the equation.

There are 9 cameras in total – a Sony DF50 with a Super 70 lens stationed at FOH, and 4 robot cams dotted around the stage to capture band close-ups. There are also 4 mini-cams with various lenses ensconced in the VersaTUBE pods onstage, plus one at FOH.

Woodhead is cutting the mix using a GV Kayak double ME switcher with no DVE, chosen because it has 10 Aux outputs that can be controlled by the EMEMs and macro facilities.

The cameras are fed out of the Kayak into one of the two Catalysts converted to DVI within the Catalyst and then output to the screen surfaces.

There are two types of screen surface. The front truss is chevron shaped and clad on both wings with approximately 1000 MiTrix tiles, elegantly ‘crowning’ the stage in a portrait configuration.

There are 10 different sized VersaTUBE pods utilising 290 HD VersaTUBEs in total, with each of the 10 clusters attached to one of the lighting trusses. All 10 of these trusses are moved into a series of different positions and looks throughout the show via a Kinesys automation system.

The Catalysts – triggered by a Hog iPC console - also store and route all the playback material to the LED surfaces. Footage is a collection of new and existing material. They have video programmed for about 40 songs, from which about 22 are selected to make up each night’s set.

Haynes explains that it’s also about monitoring and matching the luminosity of the whole picture, rather than having video blasting out lighting or vice versa. He will often pull back the intensity of the Tubes to compliment lighting cues in what he succinctly describes as a game of “Visual flip-flop” between lighting, IMAG, playback video and LED sources.

Neat special effects include the song “My Party”, when 4 interactive audio inputs are sent to Woodhead from sound and live mixed with a waveform video effect via the Kayak and Catalyst. This then appears on the VersaTUBES and MiTrix, effectively enabling the fans to see what the band are singing and playing as well as hearing it in real time.