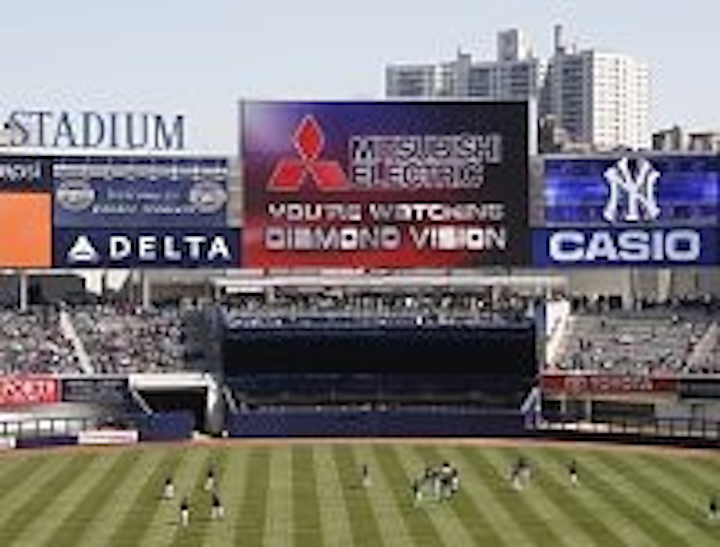 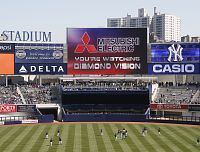 The highest resolution stadium video screen ever built has been revealed to the public for the first time. The new Mitsubishi Electric Diamond Vision system forms the centerpiece of the New York Yankee’s new stadium complex in the Bronx and is believed to be the most advanced high-definition sports venue display in the world. The screen is capable of showing four full HD images simultaneously, as well as text and graphics of stunning clarity. The new system replaces the Diamond Vision screen that Mitsubishi Electric originally installed in the Yankee Stadium 25 years ago.

Yankee Stadium opened its doors to thousands of excited fans on the 2nd of April for its annual team workout. Mitsubishi Electric executives joined players and officials from the Yankees in an afternoon ceremony to mark the official opening of the stadium and the public debut of the massive high-tech display in center field. The screen received a rapturous response from both fans and the media, bowled-over by its quality and sheer size.

The Yankees’ impressive new 8mm pixel pitch Diamond Vision display is over 30m wide and around 18m tall, delivering 550 square metres of high-definition display area, powered by an incredible 8,601,600 individual LEDs. By comparison, the scoreboard at the previous Yankee Stadium measured 7.6m by 10m with 486,400 LEDs. The latest Diamond Vision technology delivers exceptional viewing angles, allowing pin-sharp images to be visible from nearly every seat in the ballpark.

The screen is driven by Mitsubishi Electric’s newest, state-of-the-art DSC2 digital display controller, providing picture-in-picture type technology with the flexibility to show one large 1080 HD image, or up to four simultaneous 1080 HD images at the touch of a button.

This installation continues the long-standing relationship between the New York Yankees and Mitsubishi Electric, which started in 1983 when the Yankees installed one of the first Diamond Vision video displays in Major League Baseball. Just three years prior to that, Mitsubishi Electric had become the first company to introduce large-scale video display boards to Major League Baseball by supplying a screen to the Dodger Stadium in Los Angeles for the 1980 All-Star Game.