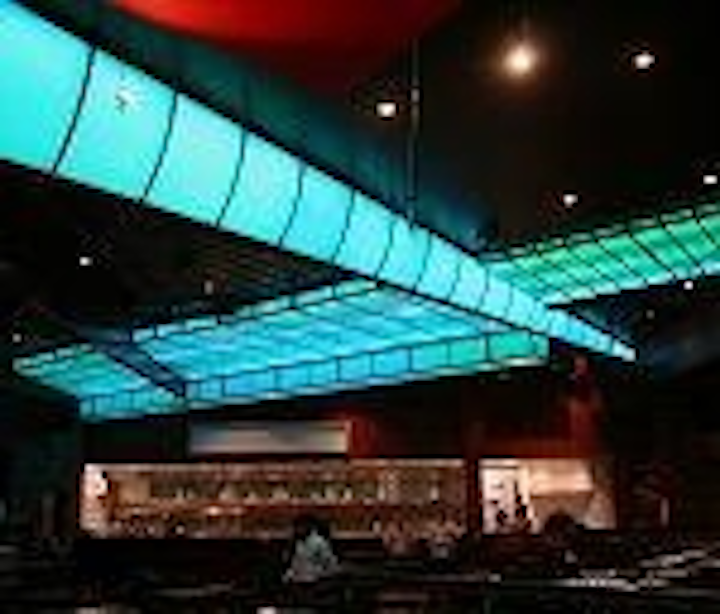 BALLANTYNE, NC -- When downtown Charlotte, North Carolina’s popular Cosmos restaurant opened a second branch in suburban Ballantyne, the owners were counting on the reputation of their French fusion-style cuisine to jump-start the new location. What they didn’t expect was that after the anticipated dinner rush cleared around 9 pm, the new Cosmos Café would get a second wind, transmuting into a wildly popular, energized nightspot.

One reason for Cosmos’ spontaneous splash into the area’s bar/nightlife scene is its highly animated atmosphere, capped off by color-changing LED lighting effects from Acclaim Lighting. So stunning are the lights that even a local food reviewer was compelled to write: “Even the lighting is neat – the lights fade from green, to blue, to red . . .When you go to visit, be sure to ask about the décor.”

Nearly 60’ long and made of white plexiglass, the comet is the visual centerpiece of Cosmos. Abstractly designed with a taller front section that tapers down to a tail, it is a declaration of the establishment’s cosmic theme. “(The owners) wanted the comet to glow,” said Kelly. “The other thing they wanted to accent were rows of ceiling panels that go off to the side of the comet.”

According to Kelly, using the X-Stick, a compact-profile DMX-controllable strip containing 12 SMD LEDs, helped him achieve an even spread of lighting throughout the comet and ceiling panels. One issue he had to address was the presence of ceiling wood blocks that could cast shadows on the comet. “When we looked inside the comet, we were like, ‘How do we get around those wood block shadows,’” said Kelly. “The way we got around it was by having multiple lights inside it, instead of one powerful light.”

Cosmos’ plexiglass panels had similar issues with ceiling wood blocks, which the X-Stick’s trim shape helped solve. On the 8’ wide panel – the wider of the two – Kelly was initially going to install one line of X-Sticks down the length of each side and have them “shooting across the middle.” But here again, the wood blocks would have produced shadows in the panel’s mid-section. So Kelly wound up installing some “filler” X-Sticks in the wood blocks themselves, which worked well to create an even, shadow-free wash on the panel.

Another unique feature of Cosmos’ décor are pictures on the wall that change colors. Kelly created this color-changing effect by framing the pictures with an LED product from Acclaim’s sister company Elation Professional – Flex LED RGB WP Tape. A very thin, high-output DMX-compatible LED circuit strip that comes in spools, Flex RGB Tape has 3 SMD LEDs every 2” and can be cut to desired length. “We just wrapped the Flex Tape around on the inside of each picture,” detailed Kelly. “They kept changing the dimension and shape of the pictures, so we weren’t sure what we would need. Flex Tape is so flexible and easy to install that it allowed us to be ready for anything.”

With its flexible LED lighting, Cosmos, too, is ready for anything – from early-evening laid-back dining, to a more ramped-up nightlife atmosphere. “Early in the night we typically pick a color theme such as red and do some slow, subtle color changes into maybe shades of orange within each block of the comet,” said Kelly. “Then once the bar gets kicking in, we have much more intense programs with faster color changes, strobing and things that are a little more interesting.”

Best of all, added Kelly, this was all accomplished well within the client’s budget. The Acclaim X-Stick-12RGB “gave us everything we needed at the price point we needed to reach.”

Contact
For more information, call Elation Professional toll-free at 866-245-6726 or visit www.elationlighting.com Eye Dialogue Lighting & Sound can be reached at 704-567-7789 or visit www.eyedialogue.com