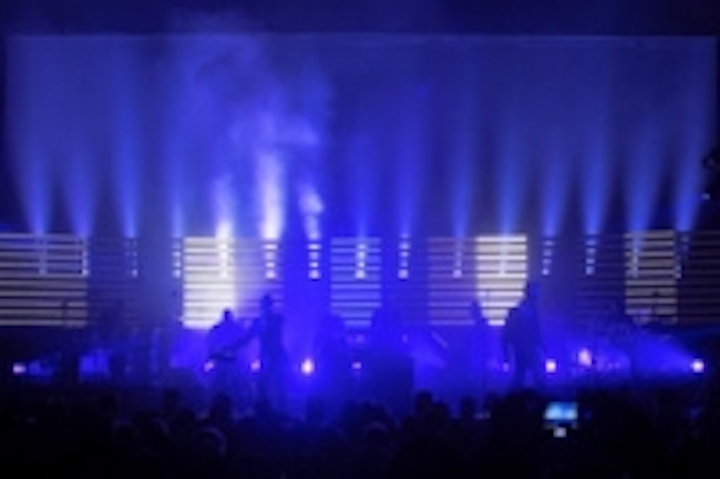 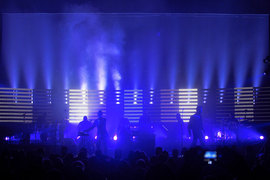 Robe REDWash 3●192 LED wash fixtures are at the hub of a spectacular lighting special effect on Massive Attack's latest UK and European tour. The rig has been designed by Robin Haddow and all lighting equipment is being supplied by Blackburn, UK based HSL.

It also includes 15 Robe ColorSpot 250ATs, which are attached to the bases of 15 custom Barco O-Lite video columns which join together to make a 15 metre wide by 3 metre high upstage screen.

It's very much styled as a back-lit show, however there are also 8 Robe ColorSpot and ColorWash 700E ATs positioned on stands and flightcases on both sides of the stage. These deliver the front, side and required key lighting.

The REDWashes are attached to 8 custom designed trussing sections - fabricated by HSL to ensure that rigging them during the get-in is a fast and efficient operation. The 8 vertical truss sections all sit on the floor behind the screen, attached to a mother grid in the roof via steels, which is hung on a 3-way Kinesys automation system. This glides the trusses up and down throughout the show.

The REDWashes are first revealed during "Angel", about mid-way through the set, when they are raised above the screen. This has enormous impact and is a great element of surprise as they appear from nowhere, and are then used more frequently towards the end of the set.

Haddow describes the REDWashes as his "favourite" lighting moment of the show. "The light output is amazing," he comments, adding that the fact that they also have a white LED in addition to RGB functionality really gives them the edge, as they produce a "real" white - something that can be problematic for LED units. Different colours, qualities and layers of white light are crucial to the Massive Attack show.

He also likes the homogenisation of the REDWash LEDs, which eliminates the pixelation that can also be characteristic of LED fixtures, so the source resembles the smoothness of an incandescent lamp. This is something that Robe has worked hard at to make a feature of its LED ranges.

In addition to all this, the rectangular shape of the overall REDWash light-source is an ideal compliment for the elongated form of the O-Lite screen.

The ColorWash 250E ATs in the frames have been a feature of the band's lightshow since the O-Lite was first used in 2008. Haddow comments that they are very bright for such a compact source and ideal for the low level beam-work and silhouetting effects. Their small size means they don't intrude on the stage space.

Massive Attack are renowned for the innovative integration of technology into their stage visuals, and this tour is another evolution in that process. Haddow worked closely with show and video designers United Visual Artists (UVA) to develop live visuals which are memorable, provocative and fun.

Haddow operates the show using a Hog 3 set up. This is also driving a PixelMAD computer that runs video content sent to the REDWashes some of the time, and they are also programmed into the Hog as regular lightsources. The D3 system running video content for the screen also controls specific lighting cues.

The tour is scheduled to continue until the end of November.