Northern Light shines over the city of Glasgow 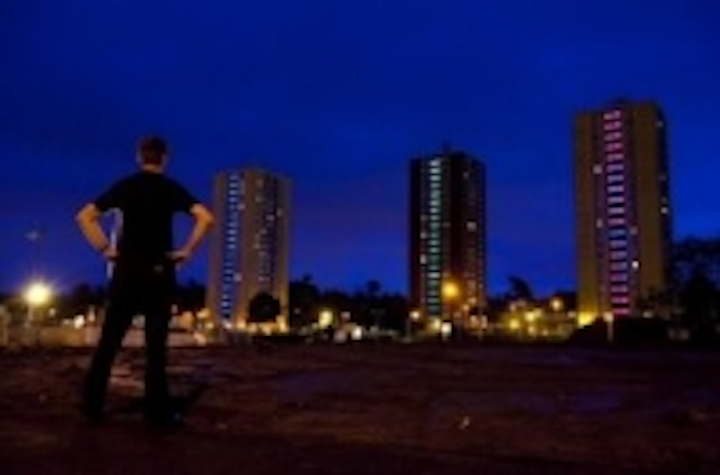 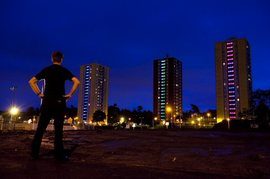 Northern Light has installed a unique lighting system in three Glasgow tower blocks which are poised to bring a splash of colour to the city – and predict the weather at the same time.

As well as creating a colourful landmark which will be visible right across the city, the lighting system utilises up-to-the-minute internet technology to enable residents to check the current weather conditions – and view the weather outlook for the next day.

The Castlemilk Tenants Housing Association came up with the original concept for the project after taking part in workshops with GHA and Collective Architecture and. In addition to funding from GHA’s Wider Action Fund, monies were also secured from Glasgow City Council, the Scottish Government and the Fairer Scotland Fund.

The design team included Colin Cuthbert and Simon Cooper from Northern Light, who worked alongside Cathy Houston from Collective Architecture to bring the project to fruition.

Collective Architecture is based in Glasgow’s Gallowgate and has an ethos of pursuing themes of participation and sustainability in architecture. The company has worked on numerous projects which involve the local community to help regenerate the areas in which they live.

Brought on board for this particular project in 2007, Collective Architecture have project managed the Dougrie Place Lighting Project from concept to completion.

Cathy Houston, an experienced architect with the practice, said: “Working with communities to improve their immediate surroundings is at the very heart of what we do. The original idea for Castlemilk stemmed from a workshop with local people and we have involved the residents throughout the project. We needed to work with a company who had expert knowledge of lighting technology, combined with an emphatic understanding of environmental issues – Northern Light fitted the bill perfectly.”

Colin Cuthbert, Managing Director of Northern Light, said: “It is becoming increasingly important to ensure that long-term lighting installations offer environmental sustainability wherever possible. The team behind this project were deliberately aiming for an end result that was as near to carbon neutral as possible. They were aware of the environmental benefits of LED lighting and Northern Light installed these one metre LED battens because they met the brief in terms of design, function and environmental impact.”

Northern Light installed a total of 180 SFX VR1000 LED battens – three per floor, over 20 floors in the three high rises. Each of the tower blocks houses its own PC and Pharos LPC1 lighting controller, combined with broadband internet connection to enable control from anywhere with internet access. In addition, the system can be programmed to run from RSS feeds to enable a constantly updated visual representation of weather conditions.

Simon Cooper of Northern Light, who was responsible for the control system design, said: “With the technology that is currently available it made sense to design a control system which could be operated both on site and remotely. As well as predicting the weather outlook, the lighting system can be programmed to demonstrate a wide variety of moving colours and patterns, such as displaying a saltire across all three blocks. This aspect of the installation will be perfect for marking special events such as the countdown to New Year, or St Andrew’s Day.”

The standard programme of the system is designed to predict the weather. In turn, each of the three towers will show the forecast temperature, the predicted wind direction and the general weather outlook, including cloud cover and rainfall.

Between dusk and 4 am, the blocks – which are amongst the tallest in Glasgow – will display the weather prediction for the coming day. From 4 am until dawn breaks the lighting will reflect the current weather conditions.

A web cam and dedicated website are also planned to show live images of this 21st century weather beacon as the colours change throughout the hours of darkness.

The first of the three blocks will display the weather outlook via a range of patterns representing sun, cloud, rain, snow, fog, lighting and everything in between. Wind direction will be represented on the second high rise with ripples of light passing over the front of the block in the corresponding compass direction. The final block will display the forecasted temperature in figures via the colour changing LED fixtures. The colour scheme will move through the spectrum from blue to warm orangey red, dependent on how high or low the outlook is.

Kate Willis, tenant chair of Castlemilk Tenants Housing Association – and a resident of Dougrie Place – said: “The blocks look fantastic and create a massive feel good factor for residents. The system is so versatile – nothing like this has ever been done before.”

Jim Sneddon, GHA’s Executive Director of Regeneration, concluded: “Good lighting really makes buildings come alive and the Castlemilk Lighting Project will instil a sense of pride in the residents and become a real landmark for the area.”