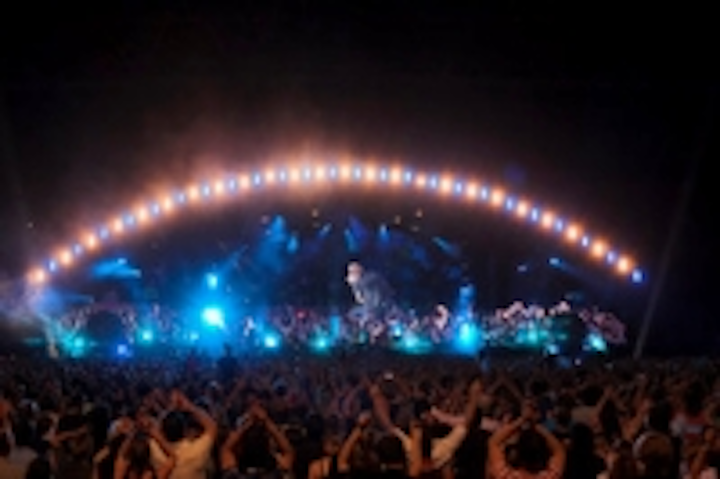 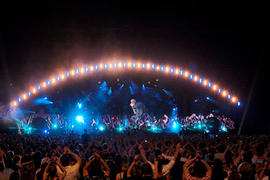 XL supplied Coldplay’s video equipment for the 3rd tour running & right from the start of this one in June 2008. The account was project managed by Des Fallon, who said, “It has been a pleasure to be work with Coldplay again, on all 159 shows.”

LED
The LED video elements were scaled up dramatically for the stadium shows, most noticeably with the addition of 550sq mtrs of XL's F30 SMD screen, which formed an elegant elongated 54 metre wide by 12 metre high arched backdrop traversing the whole of the upstage area. The Arch also featured a gentle 3.5 degree lateral curve. The surface was carefully selected by Paul Normandale, Coldplay's lighting/visual designer, in close consultation with Fallon and the team at XL Video.

The two left-and-right side screens were Lighthouse L7, each comprised from 28 panels a side in portrait format for the standard sized venues, expanded to 108 panels a side in landscape for the larger stadiums like Wembley and Munich.

Three delay screens at the back of the field were each made up from 20 x R7 panels.

IMAG
Video director Andy Bramley added two extra cameras for the stadium shows, bringing his total to 6. These were positioned two in the pit, two at the end of the stage left and right ramps that ran out from the stage into the first part of the auditorium, one on the FOH tower and the final one right in the centre of the field just in front of the delay screens. This final camera was specifically located to create a very cool looping feedback effect that was integrated into the mix for "Fix You" and "Politic". There were also 2 robo cams onstage.

Bramley used a GV Kayak mixer - his switcher of choice - and had a Magic DVE effects unit onboard, for which he has a great affection despite its working life being close to ending!

The IMAG mix was sent to both the side screens and the Arch. Sometimes the picture covered the full surface area of the Arch. Others, it was run as a 4:3 aspect ratio picture just in the central section, and another format variation used just the two end 'wings' of the Arch, with nothing in the centre and the side screens switched off. This was to bring both variety and sense of unpredictability which was central to Normandale's creative vision for the onstage LED.

The camera feeds output to the Arch screen were fed into the Catalyst system fitted with a Triple Head To Go - which allowed one output signal to be split into three utilising the Catalyst's mix outputs and edge blending, so a single image could be split over three devices (in this case the three sections of the screen which were driven by 3 processing units).

This was operated by Ben Miles, and the Catalyst also shaped, masked and fitted the images to the different screen permutations. The side screen camera footage was output directly to destination from Bramley's Kayak.

In creative terms, Bramley looked for more unusual and less clichéd angles, cuts and treatments, keeping it fresh, exciting and in the process congruous with the overall visuality and feel. He received plenty of input from fifth band member and creative director Phil Harvey, who also acted as a conduit between Chris Martin and the creative members of the production team. Martin was very aware of weaving technical production elements into shaping the band's performance.

Balls
One of the big talking points on the tour were the seven inflatable 2 and 3 metre spheres, rigged on individual Kinesys motors, which glided in and out at various points, each with its own 360 projection system. These consisted of a projector mounted with a special lens that internally fitted the content around the full sphere.

Looking after this element of the video production was "sphere tech" Matt Vassallo. The 3 metre balls were fed by Christie 20K Roadster projectors and the 5 x 2 metre balls with Barco CLM R10s. The projector signal was run via fibre optic cable which was also new for the stadium leg of the tour.

Media Servers and Control
The 1400 x 1050 resolution content for the globes was supplied by 8 Hippotizer digital media servers (previously 4) - one for each globe plus a spare, also controlled by Ben Miles via a grandMA light console. Miles also output the different camera feeds to the spheres, which happened highly effectively during "Cemeteries."

The Catalyst fed playback content to the Arch screen which was 3840 by 1024 pixels. This specially created footage was commissioned by Phil Harvey, and produced by Hello Charlie at the exact required resolution.

The content was triggered using a combination of timecode and live operation.
Coldplay has been one of a number of high profile stadium touring projects for XL Video this year. Others include U2, Oasis, Depeche Mode, Take That and Kings of Leon.