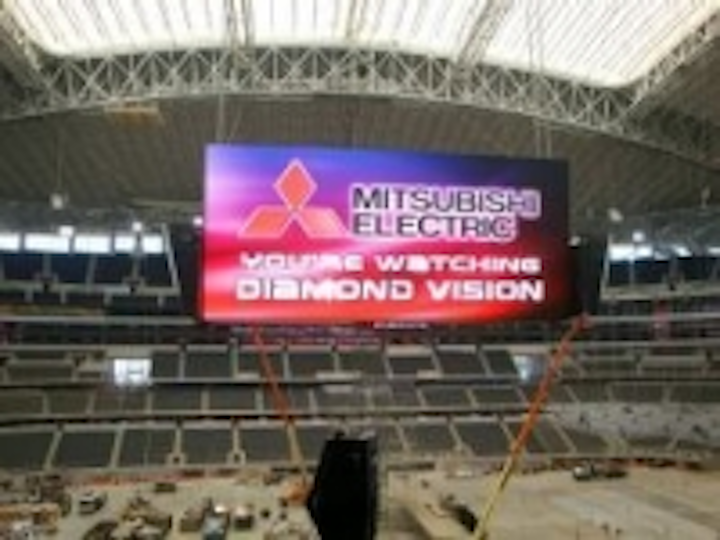 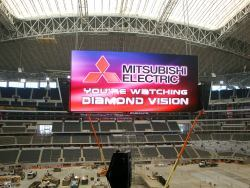 The four-sided, centre-hung structure - a first for an NFL stadium - consists of four Diamond Vision video displays, with the two main sideline displays measuring 22m high by 49m wide, and the two end-zone displays measuring 9m high by 15.5m wide. Weighing 544 tonnes, the screens are suspended 27.5m directly over the centre of the playing surface and stretch from nearly one 20-yard line to the other. Completing the array of Diamond Vision displays are four, 26m² screens on the lower concourse; an upper level fascia (ribbon) display measuring 1.2m high by approximately 610m; and two Dallas Cowboys Ring of Honor displays totalling more than 269m².

“One of the central design elements of our new stadium is our centre-hung video board. This unique feature will be an iconic symbol of our building for years to come,” said Jerry Jones, owner and general manager, Dallas Cowboys Football Club. “When we were making the decision on whom to entrust with the responsibility of making our vision a reality, the quality and clarity in the Mitsubishi Electric Diamond Vision boards was unmatched.”

The new displays will allow fans on any level of the stadium to easily view the action, creating a premium on the value of the upper-level seats. And no matter where they sit, Mitsubishi Electric’s exclusive 20-mm pixel pitch technology ensures the brightest, clearest images from any angle.

“This was one of the most exciting projects we’ve ever been involved with,” said Mark Foster, general manager of Mitsubishi Electric’s Diamond Vision Systems in the US. “The Dallas Cowboys are one of the most innovative teams in the NFL, and their new stadium reflects that. These video boards are the realisation of the Joneses’ commitment to their fans and the sport.”

ANC’s VisionSOFT is the first 3D interface capable of managing multiple real-time media streams for every scoreboard, digital advertising screen, concession stand or any concourse and suite video display in an arena or stadium. The advanced media control package offers instant playback with a single touch of a button, permitting the operator to easily flash one image, stat, animation or emergency instruction on every display in the facility. Screens that utilise VisionSOFT can mimic the look of a traditional matrix scoreboard or advertisement, before instantaneously dissolving that display into a clear animated video, enhancing the live event fan experience with dynamic entertainment.

The $1.1bn Dallas Cowboys stadium held its first public event on June 6th, a concert by country star George Strait-Reba McEntire. Several more entertainment and pre-season sporting events are planned for the Summer ahead of the official start of the NFL season in September.