LED lighting is the limelight 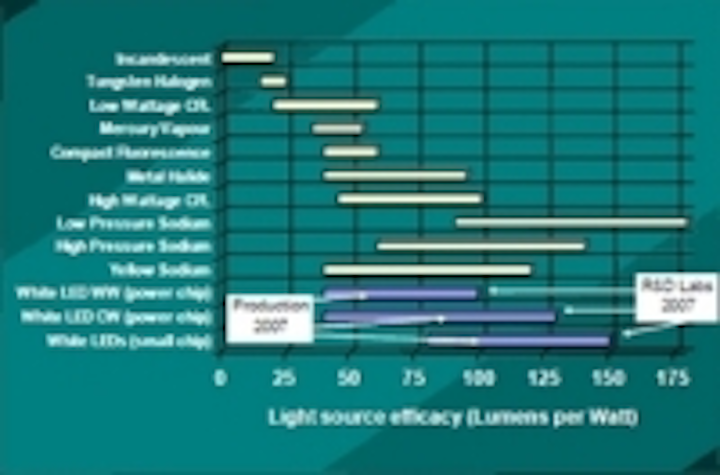 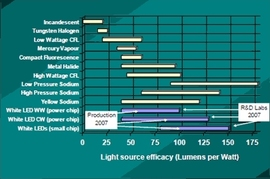 LED has become one of the most efficient ambient lighting technologies. Matching the light output of all but specialist technologies, LEDs are as efficient as fluorescent, as flexible as halogen and incandescent, and much longer lasting than any of these. LED technology is set to capture centre stage in building illumination.

Efficiency and power
Originally developed for use as indicators in front panels, the light power emitted by LEDs has grown steadily over the years – and at the same time efficiency has improved. This has happened through a process of evolution. LEDs are a solid state technology based on semiconductors, and their performance is affected by a range of factors, not least the temperature of the junction. A series of small steps over a thirty year period has taken the output from the dull red glow familiar to users of hi-fi equipment in the 70s to panels that are uncomfortable to view directly for any length of time.

Lasting up to five times as long as fluorescent tubes, and using one-third the energy of halogen bulbs, the ROI in terms of reduced maintenance and energy cost is justifying their installation in new and refurbished buildings. Highly robust, they are also the perfect solution to address the growing requirement for safety lighting in the event of an accident, especially as their low power consumption means that they can operate for lengthy periods from a back-up battery source.

Halogen and incandescent
Halogen lights have become popular, especially as spot or reading lights, but their comparative inefficiency and relatively short life makes them costly to the operator. Typical life is 2-4000 hours for halogen, as compared to 10-20,000 hours for fluorescent tubes. For LEDs, a typical life is 50,000 - 100,000 hours – eliminating the need to check bulbs as part of the regular maintenance schedule. Energy consumption is a second issue. Halogen lamps offer around 20 lumens per watt, generating the ‘waste’ energy output as heat and infra-red radiation. This gives an increased load on the air conditioning system, leading to an additional energy burden.

The trouble with fluorescent
Fluorescent tubes, especially in the compact form, have become the energy efficient light source of choice. Indeed several energy companies have taken to shipping their customers free compact fluorescent lamps to bolster their green credentials. Offering 40 – 80 lumens per watt, they are indeed much more efficient than either technology mentioned above, as well as longer lasting. Although fluorescent lighting has lifetimes of 10-20,000 hours, this is less than a third of the life of an LED fitting. The tubes are also fragile and hard to protect against accident or vandalism. Once damaged, the poisonous phosphor layer on the inside of the glass is exposed, making glass cuts particularly dangerous. The latest LEDs are at least as efficient, matching or exceeding the 70 lumens per Watt typically achieved, allowing for power conversion and/or inverter losses.

The rise of the LED
There has been a great leap forward in LED technology over the last five years, and the brightness achievable from the best LED light sources has increased dramatically. Table 1 shows how together, increases in overall light output and improvements in efficiency mean that LED lighting is now more than a match for halogen in terms of light output, and almost twice as efficient. In 2008, LEDs offering 100 lumens per watt or more are available, giving 70 lumens per watt when installed in a good quality fixture. This matches the performance of fluorescent tubes, allowing for the inverter losses. The latest products from Citizen, a world leader in the technology, deliver 102 lumens/ Watt in the 350mA version, whilst the 1500 milliamp version in the same range can deliver 1200 lumens output.

Power LEDs have been tracing a steep performance curve, to deliver environmental and economic benefits in a growing variety of lighting opportunities. The most powerful LED light engines are now able to supersede conventional incandescent lamps for office lighting, as a recent successful project in Canada demonstrates.

Burton Lighting has installed 30 LED downlights at the corporate offices of Morguard Properties in Mississauga, Ontario, as part of an upgrade and refurbishment in conjunction with designer Therese Gould and consulting company Comley van Brussel Design. Burton Lighting replaced a mix of 90W and 120W PAR lamps. Thanks to higher efficiency and lower operating voltages, LED light sources consume around one-third of the power for a comparable light output.
Throughout a large office or an entire building, this translates into an appreciable saving in the number of Watts consumed to light the premises. Barry Burton calculates a yearly power saving equivalent to around $1600 Canadian dollars for the 30-lamp conversion at Morguard. Converting to LED lighting also unlocked some interesting additional energy savings due to the fact that less heat is produced, thereby reducing the load on the building air conditioning system. The savings vary depending on the local climate, as this influences the air-conditioning time required: as a rule of thumb in the Ontario area, saving three Watts of lighting power brings an additional one-Watt saving in HVAC power. In addition to delivering valuable financial benefits, these energy savings also help enterprises demonstrate commitment to environmentally responsible behaviour.

Designers, too, are concerned with helping premises owners improve their image. Their success depends on being able to demonstrate a portfolio of powerful ideas and innovative solutions, and winning enthusiastic endorsements from customers in their target markets. Therese Gould sees new technologies such as LED lighting as central to meeting these objectives. “This technology now has the capability to deliver the raw luminous intensity required to light large working areas, and is also extremely controllable,” she agrees. “We can optimise the intensity, directionality and colour of light to create imaginative effects that have hitherto been impossible or impractical in commercial projects.”

Effect lighting
Not the least of the attractions of LED lighting is its flexibility and controllability. For example, Peter Frost-Pennington is using LED lights as part of the Darkest Muncaster show that he uses to attract visitors to Muncaster Castle in winter. He installed 5W LED light fittings in as many windows as possible, replacing existing 50W halogen fittings. This gives a 90% reduction in energy use. Marl RGB light engines are particularly effective in this kind of application, as they mix light colour at source – eliminating annoying effects such as triple shadows and fringes. They can fade elegantly from colour to colour – giving the impression that the building is ablaze for example, or providing a ‘Mexican wave’ effect. With over 16 million colours available for each light, the only constraint on the effects achievable is really the imagination of the designer.

Safety lighting
There is a growing requirement on building operators to provide safety lighting in the event of a fire or other emergency. LEDs are exceptionally robust – indeed they are used in Formula 1 racing as crash severity warning lights. Peter Frost-Pennington at Muncaster also considered the issue of providing sufficient light to allow visitors to evacuate the grounds safely in the event of a power failure.

“Normally, safety lighting requires a back-up generator to operate, but LED lights are so efficient that strings of them can be run from a normal UPS for the twenty minutes it takes for visitors to return to their cars,” he explained. “This also means that the safety lights come on instantly, avoiding the start up delay you would unavoidably get if we were using a generator.”

Overcoming Barriers to Adoption
Most LED light engines on the market, for example, require new wiring to connect multiple units to a transformer across a 24V DC link – but this isn’t necessarily required. Barry Burton overcame this by designing an LED downlight for direct connection to a PAR-30 type fixture. By including a small 120VAC-to-24VDC converter within the luminaire itself, he has created a low-power LED lighting solution that can be used within a standard mains-lighting circuit. This allows refurbishment of offices to use LED lighting without requiring new wiring practices or inspection codes. In addition, LED luminaires can be retrofitted easily as part of a lighting-only upgrade without rewiring.

Burton Lighting’s LED downlight consumes only 35W. From a ceiling height of 10 ft, the unit produces a beam of 4.5 ft diameter and 28 foot-candles luminous flux at its centre. This is comparable to the light output of a PAR-30 incandescent lamp, allowing like-for-like replacement to deliver similar or better lighting without requiring extra LED units to be fitted.

Efficiency benefits
LED lighting in commercial and domestic buildings now offers a host of benefits. It is energy efficient, providing an immediate, direct and measurable cost saving that alone justifies the investment in replacement. Further savings come from the reduction in the load on the air conditioning system, and from the reduced need to replace lights – a significant issue for inaccessible fittings. In new construction, the benefits are even more compelling – one lighting system can be used to provide ambient and effect lighting, and double up as emergency exit lighting to boot. It is reasonable to conclude that LED technology is not just stepping into the limelight, but will actually be providing the limelight in the future.