Seoul Semiconductor to supply LEDs for farming to Japanese ministry 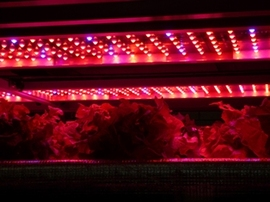 Seoul Semiconductor will supply 300,000 pcs. of LED for ‘LED Farming Demonstration Project’ of Ministry of Economy, Trade & Industry of Japan.

LED light source for farming is getting popular for energy saving and improvement of product quality.

Competitive power of Seoul Semiconductor and possibility of its market expansion with diversified items in the Japanese market have been confirmed.

As a global LED maker, Seoul Semiconductor Co., Ltd., (represented by Chung Hoon Lee, www.acriche.com), has supplied LEDs emitting red and blue light under their Z-Power LED to “A” company in Japan, and introduced their advanced technology and products at ‘LED Farming Demonstration Project’ organized by Minister of Economy, Trade & Industry of Japan.

This ‘LED Farming Demonstration Project’ held at the lobby floor has been planned by the local economy & industry group of Minister of Economy, Trade & Industry of Japan in order to inform the possibility of LED as a new farming light source and the new LED-related technology to the public and the officials of that ministry.

Z-Power LED products of this company have been supplied to ‘A’ company which is a major participant in this project, in order to produce LED lighting fixture samples, and 300 thousand pieces will be shipped more. The products of Seoul Semiconductor used for this project emit red and blue lights, as the artificial light source helping the growth of plants.

A staff of ‘A’ company said, “This project focuses on the LED lighting fixtures for farming which have high brightness LED with high light quantum, and especially optical wavelength of red and blue light can hasten the growth of plants so that enables stable harvesting from vegetable farming.

By participating in this project, Seoul Semiconductor confirmed their competitive power in the Japanese market having advanced technologies, and the possibility to expand the LED market as a lighting source for farming. This is expected to be a starting point in developing new markets.

With artificial light source, the quality and quantity of plants may increase through farming without agricultural chemicals and influence of weather, leading to higher income of farm families. In the past, incandescent lamps, fluorescent lamps and sodium lamps have been mainly used, but in the present time, eco-friendly LED of high efficiency and long lifespan without carbon discharge is being popular. Also Seoul Semiconductor has supplied LEDs for agricultural lighting in Canada.

According to the report of Rural Development Association of Korea, assuming that we cultivate crops with supplementary lighting in about 3,000 ha by using LED, we can get 70% energy saving effect compared to incandescent lamps, which amounts to $12M per year. Especially, farming with artificial lighting became possible even in a desert or the Artic region. Therefore, it is expected to be helpful to remove food problems over the world.

Acriche, developed in 2006, is operated directly through AC current without any converters needed for DC LED operation, extending the LED's life span and making installation costs easier and less expensive. With these important benefits, Acriche LED technology is expected to pioneer the future of the lighting industry. With its cutting-edge technology, Acriche has been awarded in Newtech Korea 2008 and named as Korea Ten Best New Technologies of 2008.