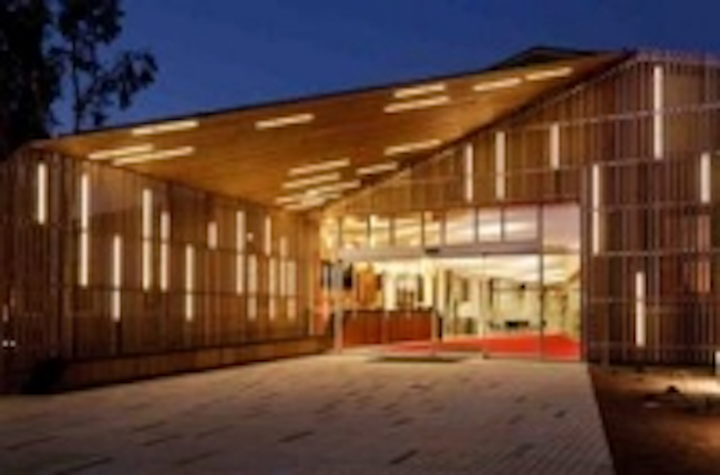 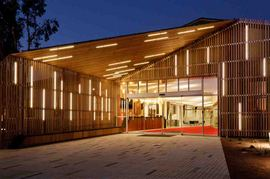 -- From Dismal to Dazzling, Plexineon Redefines an Existing Structure

Once a humble workshed, the new administrative center for the Claremont University Consortium (CUC) in Claremont, California, is a stunning study in how creative light installations can give an existing structure a second life.

Central to the building’s rebirth is a vertical linear pattern of iLight Plexineon White 1X Series fixtures that highlight the exterior — redefining the structure’s public presence and acting as a precursor to new dynamic and user-friendly interior.

The goal of the project was to consolidate into one location several departments and services that previously were dispersed across campus. Opting to repurpose a gabled-roof workshop and storage shed went a long way toward achieving sustainability goals, but the CUC sought to go a step further — requiring that elements in the adaptive design also be environmentally sensitive, including lighting.
Toward that end, Nelson Jenkins, Owner of Lumen Architecture, used varying lengths of White Plexineon to efficiently and effectively accentuate the vertical lines of a new slatted cedar screen that envelopes the existing façade.

That intent is especially apparent as the screen transitions from wall to entry canopy, where the slats are threaded with Plexineon in increased density to playfully highlight the structure’s sloped geometry while providing general illumination and way finding.

Jenkins chose Plexineon in this case for several reasons. “The fixtures are weather resistant, durable, and they provide just the right brightness,” he says.

Due to past experience with the product, Plexineon’s reliability won over both him and now CUC.

“The client really loves the effect of the Plexineon,” he says. “The project has been considered a great success.”