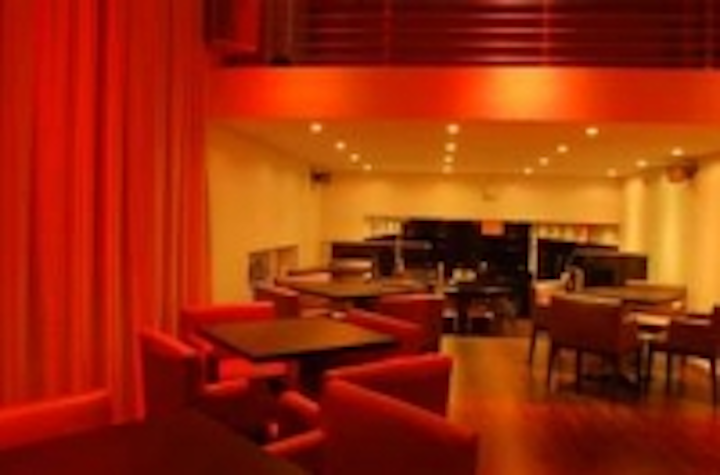 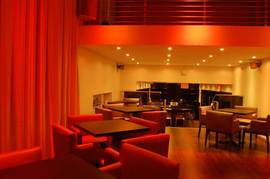 MIAMI BEACH, Fla. – ILUMINARC®, a U.S.-based lighting manufacturer and a leader in LED illumination, Three floors of historic art deco architecture have received the ILUMINARC® treatment. The Marlin Hotel, on Collins Avenue in the prime area known as South Beach, has seen a recent renovation.

The gutted interior is now a sleek Miami Modern-style resort, its exterior refurbished to the lilac luster of its original art deco heyday. All of which has been illuminated by ILUMINARC® LED-fitted lighting solutions, specified by Geoff Farrell of D’light Studios, based in Ft. Lauderdale, Fla., and controlled by ILUMINARC® Logic system—working seamlessly with Savant.

“Updating anything historic is always a challenge,” Farrell said. “Bringing something into the now with crisp, clean lines—modernizing an existing structure—can be an undertaking. Adding color changing lights to juxtapose a stark landscape, using ILUMINARC® fixtures, was the best solution.”

Parked in front of the hotel is a vintage pink convertible—a permanent fixture and part of the décor. Only three steps and you are standing on the front porch dotted by umbrella-covered tables, which help block the morning sun as it streams into the ample windows of the first floor. A set of double doors beckons you to enter. Once inside, a vintage terrazzo floor—set with a classic art deco motif in shades of beige and mauve—greets you. You immediately look up to the custom chandelier, a rectangular-shaped mass of intertwined copper wire mounted flush against the ceiling, hanging from its center a large teardrop-shaped entanglement. Twenty-six Ilumipod Logic Tri-4 wash lights are recess mounted in the ceiling behind the copper mass; their color changing effects on the chandelier structure is mesmerizing.

“We selected Ilumipod Logic Tri-4 wash fixtures because when you are dealing with color changing lights, in other words an RGB fixture, the Ilumipod Logic Tri-4 incorporates all of these colors in one optic,” Farrell said. “The result is simple, even illumination without any rainbow effects or crazy shadows.”

The rest of the lobby is an intimate space with seating and bookshelves, a pair of elevators and a set of stairs on the right hand side. The left side extends back towards a supper club-style seating area with a mezzanine stage perched above—perfect for a three-piece jazz band. Just under the stage beyond the seating area and down a short flight of stairs is a sunken bar. The same Ilumipod Logic Tri-4 fixtures, as well as a complementary set of Ilumipod Logic 6 fixtures framing the right hand side, downlight this seating area as well as the bar. There are eight pre-programmed scenes changing colors throughout the entire first floor—one moment awash in azure, the next a warm amber glow.

Upstairs on the second floor—directly above and the same size as the lobby—is a lounge. It holds a secondary bar, conference table and other small couches and soft chairs, as well as four television sets. Mounted in the ceiling are another series of Ilumipod Logic Tri-4 fixtures providing a color changing downlight effect. The rest of the second floor, as well as the third, are guest rooms.

Each guest room is fitted with four Ilumipod Logic 6 wash lights, three in each corner of the room. The walls, sheets and drapes are all white and provide the ideal surface for color changing lights. The bathroom features a frosted glass insert in the wall forming the bathroom. Inside the tiled shower is one Ilumipod Logic 6 mounted from the ceiling, which glows in concert with the rest of the room. Outfitting each room is a bed, crushed velour couch, flat screen television and built-in stereo system. Issued as guests check in to the hotel, an iPad is preprogrammed with their preferred musical selection. The iPad will also allow guests to control the stereo, television, drapes and lights with just a touch.

The Ilumipod Logic system controlling the ILUMINARC® fixtures works seamlessly with the Savant system installed inside the hotel.

“ILUMINARC® Logic system is very simple to use and easy to install,” Farrell said. “Everything is powered over Ethernet which makes drawing up plans and designating which channels of the box go to which light easy to understand. When the integrators came in to do the system programming, they were able to tie them together quickly. Having the Logic system work directly with the Savant system was ideal.”