Colour Sound chills below zero at IceBar by IceHotel London 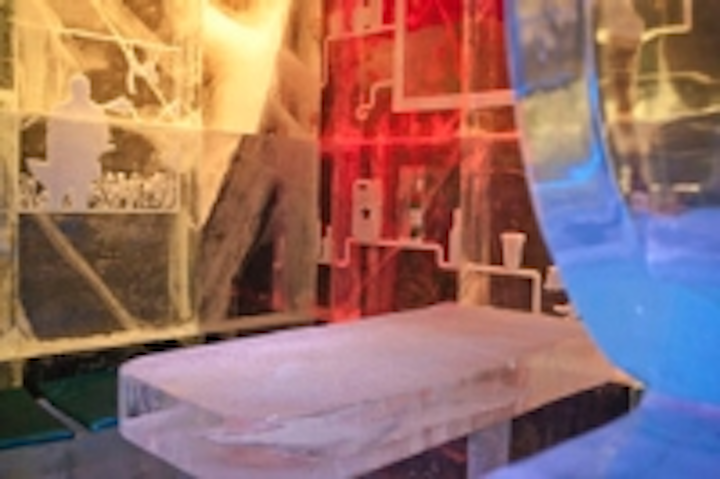 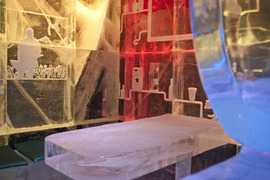 The lighting is project managed by CSE's Steve Marley. The company has worked with the venue for three years and the lighting spec and site fit-up is overseen for CSE by Jon Rickets, who works closely with the ICEBAR BY ICEHOTEL London team, including general manager Matthieu Bourgogne.

The elaborate and intricate ice sculptures - created by designers from the original ICEHOTEL in Sweden - are changed annually along with the lighting, which is an integral part of the whole vibe of the space.

During the second year lighting the ice, CSE added 21 Anolis ArcLine RGB 36 battens to up-light the main ice walls. These LED sources and the quality of light they emit have proved perfect for making the minus five degree environment truly magical.

A long bar forms a major part of the design and this is lit from below by six new 24-way ArcLine RGB units added this year. A punky head is a major detail of this year's ice sculpture and this is highlighted with a single ArcLine 18.

In the roof for general lighting, 18 of the new Anolis ArcSource 12 Multichip units - each one featuring a single cell emitter - are used for general washing and down lighting.

Further boosting the coolness and unique ambience of the space are two Anolis ArcLine 36 Warm White strips, which sit above the ice wall at the back of the bar, highlighting the sign and logo.

Also behind the same ice wall are four panels of CSE's BT37 LED screen. These are fed with content from a media server, and produce colour sweeps and other funky effects, adding some movement and dynamics into the mix.

All the Anolis elements are controlled via a selection of ArcPower drivers - two ArcPower 360s are running 10 each of the ArcLine 36s. An ArcPower 144 is running the other ArcLine 36 and three of the ArcLine 24s, with another ArcPower 144 driving three more 24s and the ArcLine 18 unit. The ArcSource 7s are powered by an ArcPower 16 x 6, and all of these are squeezed into the very limited space available for control gear.

All the installed LED lighting is programmed on to an Avolites Azure console with an Environment Wing, spec’d by CSE. A series of colourful static lighting looks are used as standard, with colour chases and other scenes available for special events, all easily selectable for playback by the ICEBAR BY ICEHOTEL London staff.

Anolis was chosen because Rickets has worked with the brand before "It’s easy to install and very reliable," he comments, and it was also recommended to him for the harsh environment by others. As the sister company to moving light manufacturer Robe, he was also reassured that the engineering quality was excellent.

The original Arcline 36s have now been in place for two years, and they have not had a single issue with any of them!

Apart from the extreme cold - never an easy working condition - the tight fit for all of the kit in the space was the other main challenge explains Rickets. The venue was shut for a week this year to allow the changeover to the new ice and its lighting, with cabling going in first before being followed by the lighting fixtures and LED screen panels - all ahead of the ice.

ICEBAR BY ICEHOTEL London is one of a number of current prominent CSE installations in London, which also include The Box in Soho and The Electric in Brixton.