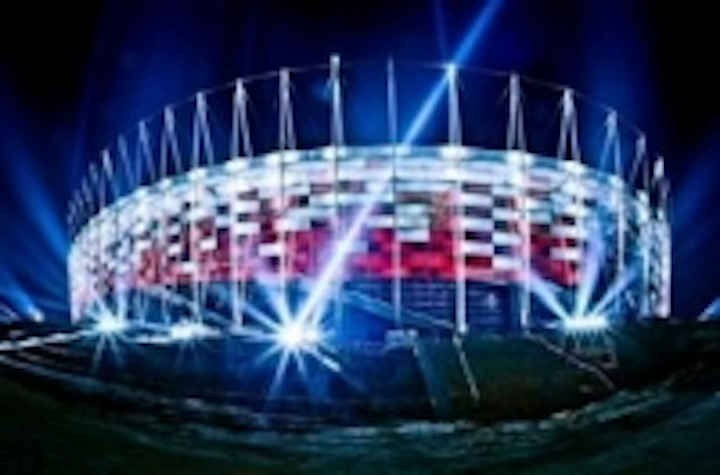 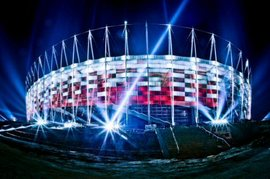 -- Energy-efficient light technologies for stadiums in Poland and the Ukraine

Osram will be installing the latest light technology in four stadiums for the European Football Championship, which is to be held in Poland and Ukraine from June 8 to July 1, 2012.

The National Stadium in Warsaw is the absolute highlight. Osram will be supplying cutting-edge lighting solutions for the stadium façade, which is to be used as a gigantic screen.

"In a stadium, a range of very different lighting situations must be catered to in a small space and these require individual solutions. This is where our competence as a full liner comes into play, enabling us to provide one-stop solutions," said Klaus-Günter Vennemann, CEO of the General Lighting Business Unit at Osram. Along with Warsaw, the stadiums in Gdansk and Kiev will also be equipped with light solutions from Osram. A further one is planned in Lviv.

The outer façade of the National Stadium in Warsaw will be the high point of the Euro 2012. Some 1,700 LED luminaires from the Osram subsidiary Traxon will light up the shell of the stadium in Poland's
national colors of red and white, creating atmospheric light that is visible from far away. "We have successfully transformed the façade into a giant screen on which we can display a range of light patterns, match scores and the names of players and goal keepers on the outside of the structure," explained Bogumil Stepan, Managing Director of Osram in Poland. The segments of the interwoven shell
of the building are fitted with dimmable Linear XB 36 LED luminaires which are anchored by specially developed holders, permitting uniform illumination of the individual panels. Unique effects can be created
in combination with an intelligent light management system.

Innovative light technology from Osram is also to be used for floodlight illumination in Warsaw, where 450 energy-efficient, high-output lamps have been installed to light the pitch. The lighting system, which is being used in the European Championship stadium in Gdansk, too, complies with the requirements for HD-quality TV broadcasting, but without dazzling spectators in the stands.

The other country hosting the 2012 European Championship, Ukraine, has also opted for light technology from Osram in two of its stadiums. Specially converted for the 2012 championships, the Olympic Stadium in Kiev can accommodate around 66,000 visitors and will be hosting the finals.

Almost 30,000 high-output LEDs from Osram Opto Semiconductors have been installed for the illumination of the stairs in the entrance area and for decorative light design in the bar area. "With our LED technology, we are supplying energy-efficient, durable and safe lighting in the entrance area," said Nikolai Dianov,
Managing Director of Osram in Ukraine.

A total of around 2,000 high-output lamps, 3,400 energy-saving lamps and 1,300 halogen lamps from Osram have been installed in Kiev for the illumination of interior spaces and the outdoor area. Their high
energy-efficiency and long service life will greatly reduce both costs and CO2.

It is also planned to install LEDs from Osram in Lviv where they would provide architectural illumination for the European Championship stadium. Meanwhile, a total of 2,000 meters of the LED Linearlight Flex strip, with its low consumption and outstanding flexibility, should bring modern LED light to even the most secluded corners of the stadium. So Osram would illuminate every second stadium for the European Football Championship.

A competent partner in the Allianz Arena and in the illumination of sports events Osram's successful projects in this sector include the lighting for the Allianz Arena in the north of Munich, the home of the professional soccer clubs FC Bayern München and TSV 1860 München. The stadium is the first soccer venue in the world that can change the color of its entire façade – thanks to light technology from Osram and the Osram subsidiary Siteco. The stadium glows in red when FC Bayern München is playing, in blue when 1860 München is playing and in white when hosting Germany's national team.

After converting the floodlight system at the start of the current season, Osram will be creating distinctive, emotive lighting effects with advanced LED technology in the FC Bayern Theme World from mid-may 2012 onwards. The project involves installing a range of different LED components, intelligent management systems and OLED lamps throughout the Theme World.

Indeed, Osram already has an excellent track record in the field of large sports events. For instance, all ten stadiums which hosted the 2010 Football World Cup in South Africa were fitted with energy-efficient technologies from the light manufacturer. The best-known installation is the LED Arch which spans the
entire stadium in Durban.

ABOUT OSRAM
OSRAM AG (Munich, Germany) is a wholly-owned subsidiary of Siemens AG and one of the two leading light manufacturers in the world. In fiscal year 2011 (ended September 30, 2011), it generated revenue of about 5 billion Euros. OSRAM is a high-tech company in the lighting sector and more than 70 percent of its revenue comes from energy efficient products. The company, which is very much internationally oriented, has around 41,000 employees worldwide, supplying customers in 150 countries from its 44 production sites in 16 countries (as of September 30, 2011).