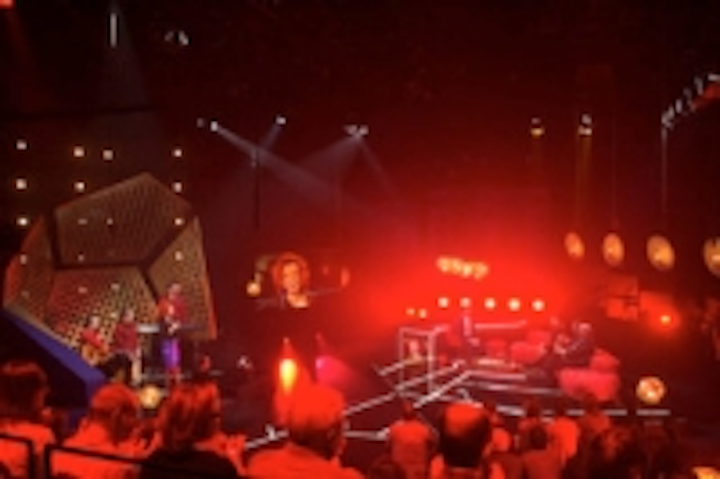 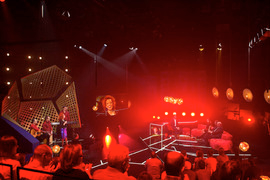 The initial batch of 42 fixtures were delivered by Robe’s Benelux distributor Controllux, in a package co-ordinated by Belgian sales manager Bram de Clerck, and specified for the TV station by their Head of Technical Johan Bosmans.

He had been impressed after seeing LEDWash 300s in action on shows, and they also came highly recommended by a number of others, including leading Belgian TV lighting designer Michiel Milbou, who specified them on his current design for popular prime-time entertainment industry chat show, Vrienden van de Veire.

This is hosted by DJ Peter Van de Veire, recorded in Studio 5 of the VRT complex and broadcast on Saturday nights on Belgium’s EEN channel.
The overall show look for Vrienden van de Veire relies heavily on lighting and projection. The theme colour is gold, and lighting is used to create WOW factors, big moments and special effects for guest entrances, as well as for all the standard TV lighting requirements.
The LEDWash 300s are scattered all around the studio which includes a live audience and a band stage, used to close the show each week with a live performance.

Some fixtures are on the set right behind the guest’s couch, others are on stands about a metre high around the edges of the space, shooting across the studio, and some are on flexible wire ladders descending from the studio roof.

Much use is made of the LEDWash 300s three individually controllable LED zones, which are great for funky, whizzy on-camera effects.
Milbou has his own creative design company - Never Fear Shadows – and VRT has been one of his regular clients for the last 10 years, in which time he has lit numerous shows covering all genres and styles.
He has not used Robe fixtures before, but liked the LEDWashes as soon as he saw them, initially at PLASA 2011, and then in a full demonstration by Controllux. It’s primarily for their impressive and high quality light output, small size, light weight and low power consumption.

“I love the LEDWash 300 and 1200,” he enthuses, “The 300 is a cute, small, beautiful lightsource that can easily be incorporated into sets, and the 1200 is incredibly strong and powerful. Both have a nice beam, good colours and excellent whites”.

Milbou adds that the beam shape is “Very Nice”. He appreciates the 15 – 60 degree zoom and the perfect flat field of light, all of which are ideal for television environments together with other qualities like reliability in a tough operating environment.

The LEDWash fixtures and all the other lights for Vrienden Van de Veire are controlled via a grandMA2 light operated by Werner Dries and Chris Leemans. Additional lighting equipment for the show is supplied by PRG Brussels, who also own a quantity of Robe LEDWash 300s supplied via Controllux.