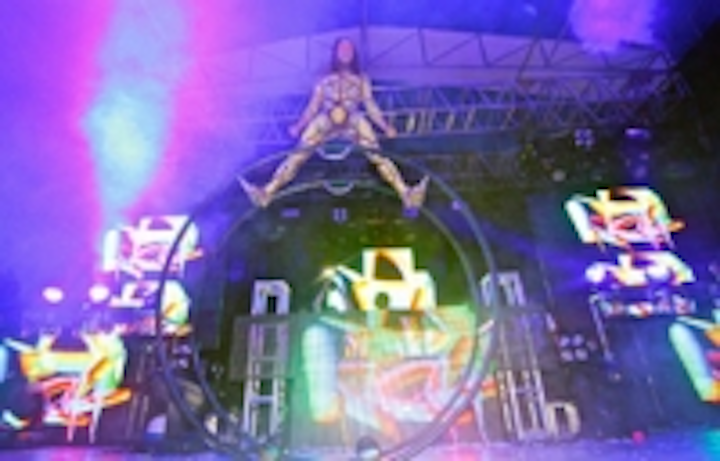 Lighting and Production Director for Dayglow Tour and owner of Advanced Concerts Productions Collyns Stenzel provided and specified the MVP™ 18 video panels for their high-resolution displays, their suitability for temporary outdoor installations and ability to sustain windy weather conditions, and last but no least, for being easy to clean after performing in the line of ‘paint fire.’

“I looked for a way to fill a lot of negative space in the show,” Stenzel said of his structured design. Because the video panels are so lightweight—less than 20 pounds each—Stenzel was able to break up the design when needed in order to fit the show even in the rooms with the most intense rigging restrictions.

Stenzel’s majestic stage design comprises eight different sections of video walls built in vertical layers and in depth. A central video wall of 36 panels flown mid-stage is flanked by two video walls made of 10 panels each, suspended from truss in mid-air. Two other video walls of nine panels each hung from a higher truss symmetrically on each side of the central wall. Towards the front of the stage, overlapping with the central wall, Stenzel designed a frontal smaller video wall of eight panels, and placed on its sides two displays of nine panels each.

“MVP™ 18 is exactly what we were looking for,” Stenzel said. “It was vey easy to build the video wall. It gives a perfect amount of brightness and is suitable for indoor and outdoor use.”

Each band of tri-colored SMD LEDs is covered by a diffuser lens, which not only protects the LEDs, but also makes it easier for Stenzel and staff to clean up paint splashes on the panels. “If we get a little paint it’s not a big deal, comes off right away with water,” he said. For temporary outdoor usages Stenzel removes the diffuser lenses to increase brightness.