Robe goes wild for the Maccabees 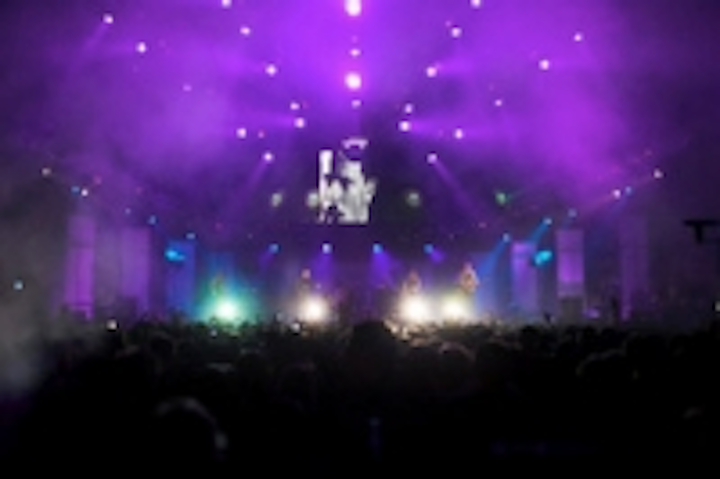 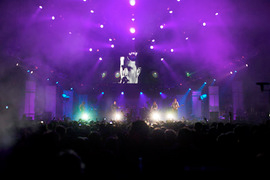 Robe ROBIN MMX Spots and LEDWash 600s were the main moving lights used by LD Phil Shaw for a recent high profile one off show at London’s Alexandra Palace by indie rockers, The Maccabees.

The band are currently promoting their third studio album ‘Given To The Wild’, released in January and hitting the UK album Top 10 Charts.

Shaw has been working for The Maccabees since the start of the year. He brings a fresh and invigorating look to the stage, and for the Ali Pali show, worked in close collaboration with video designer Josh Bagnall to set the aesthetic tones.

Lighting equipment was supplied by Buckinghamshire based Siyan.
Shaw had used Robe’s LEDWash 600s before and was keen to incorporate them into the rig for this one. He particularly wanted to use them on a larger stage and experiment with utilising the individual LED ring control for specific effects.

The LEDWash 600s were all hung on five 40ft trussing spines above the stage – five LEDWash 600s per spine – which fanned outwards and upwards from an upstage centre point. They were the main fixtures of the rig and covered all the general stage, band and high level set washing.

It was his first time using MMXs. The 26 fixtures were positioned all over the spines (three per spine) and on two higher upstage trusses, with eight on the floor.

The MMXs were used for numerous effects, including to wash a series of four filled-cloth flat set pieces per side, arranged to bring a shrinking perspective to the performance space.

He spec’d MMXs after setting them up in Siyan’s warehouse and giving them a good run - getting a good feel for what they could do. After the show he commented, “The optics are extremely crisp and the units are really punchy. I like features like the new and improved inbuilt macros, plus the overall speed of the fixture, not just for pan and tilting but also on the internal mechanics”.

On the LEDWash 600s he says, “They are very bright, fast, smooth and super creative. The colour range is excellent including the CTO and CTB whites”.

He also used them on the Maccabee’s UK tour earlier in the year, which played Academy size venues, where he found the LEDWashes mostly didn’t need to be run at more than 70% intensity, such is their brightness.

Shaw is a relatively new Robe user who has been particularly impressed with the ROBIN series.

The rig also contained a number of other moving lights and a wide selection of generics.

The overall look and feel of the lighting and visuals was moody and dramatic, with lots of playing on the sense of perspective and other visual trickery that changed the shape and perception of the stage space.

Shaw programmed and ran all the lighting from a Chamsys MagicQ 100 console.

The show was project managed for Siyan by Jez Johnson, Will Yapp was the lighting crew chief and production manager for the Maccabees was Jon Barker.