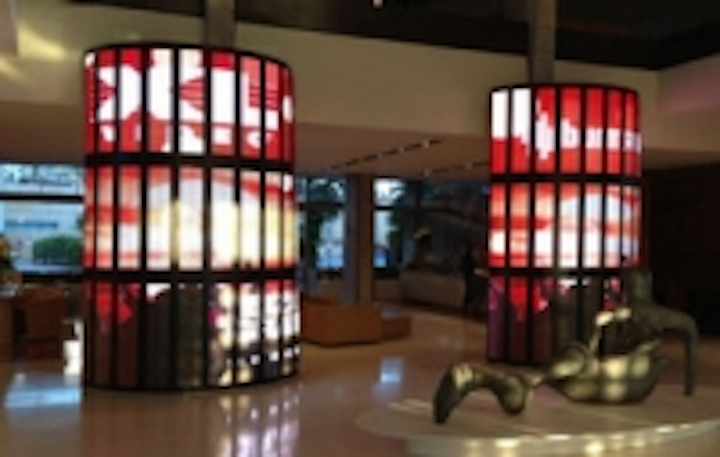 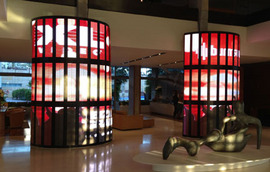 Working together with The Shop Ibiza & IMS, XL Video provided two Barco O-Lite 510 curved LED screens which greeted delegates in the reception of Ibiza Gran Hotel, Marina Botafoch, as they arrived for the conference.

For the Gran Finale show, XL Video was tasked with providing a spectacular projection on to the Cathedral above Dalt Vila.

Unlike the usual preparation for a projection mapping project, the mapping had to be done based on photographs and on-site measurements, and then line-up and programming were done on location in Ibiza by XL Events’ Technical Director, David Mulcahy.

Special permissions were required to turn off the architectural lighting on the buildings and a set of custom masks were applied to ensure the projections didn’t spread to adjacent houses.

XL Video specified six high-brightness HD projectors to cast images on to the building and tower, and the output was controlled using four Coolux Pandora’s Box media servers and enhanced with the use of Incite’s Media Manager Pro and Coolux’s Widget Designer Pro software.

As the sun began to set, the building lit up with the conference logo and was followed by content for the DJs and artists appearing, interspersed with atmospheric graphics that captured the party mood.

The Gran Finale concert took place in the plaza below the projections. On stage XL Video specified its versatile new Pixled F-10 LED product which clad the DJ booth, and three more flown screens of F-10 above the stage, creating a dynamic and ever changing set for the artists and DJs to play out from.

A further screen of Pixled F-10 was set up in the garden of the Gran Hotel, showing sponsors logos and other information throughout the conference as well as providing a backdrop to the Pioneer DJ stand

XL Video has established relationships with a number of electronic dance music (EDM) artists involved in the summit, working with them to take the creativity of their recordings and develop exciting visual live performances.

XL Video’s support of the International Music Summit further reinforces this commitment to building this ever-growing genre of music into a viable touring business.