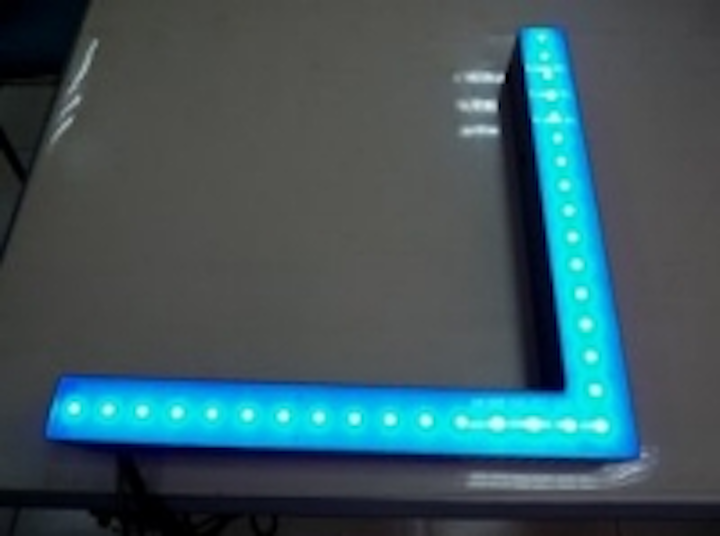 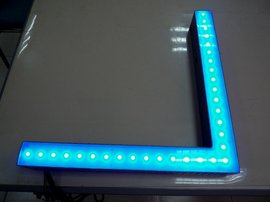 ‘L Pixel’ is an example of Illumination Physics’ value engineering and agility in design development. The majority of Illumination Physics sales involve custom designed equipment as we are a project focussed provider. The story of ‘L Pixel’ is a tale that focuses on our unique way of solving problems rather than this product’s specific application.

L Pixel was created for the OPUS Project designed by Zaha Hadid in Dubai. This remarkable project called for custom LED fixtures to be fitted into one corner of each and every window in the building.

The initial technical approach used two short high powered LED linear luminaires mounted externally and fitted with a diffuser. There were many inherent issues with this methodology, not the least of which was the cost - high powered LED is expensive. The wiring and installation also proved problematic due to the sheer complexity of attempting to control so many colour changing fixtures by DMX. Since the fixtures would be outside the building envelope and the drivers would be inside, every curtain wall pane required a penetration which increased the cost. Maintenance and cleaning would also be an issue. In Dubai, there is a high proportion of dust in the atmosphere borne by breezes from the surrounding desert. This dust settles very quickly on any building surface that is not vertical. The architecture of OPUS would have many organic surfaces like this and constant cleaning of the luminaires would be required. Lastly the power consumption was unacceptable. LEDs may be efficient producers of light, but used in such large numbers on a single structure the running costs and carbon footprint would be a fatal problem.

Illumination Physics took a unique approach and combined the two luminaires into one ‘L’ shaped Luminaire using a cost-effective injection moulding technique. The new luminaire was moved to the inside of the glass and formed an unobtrusive part of the window frame, solving maintenance issues and avoiding all of the penetrations. As the extreme temperatures in Dubai were no longer an issue, a wider choice of LEDs became available. The high power LEDs and diffuser were abandoned in favour of directly viewed tri-colour SMD LEDs which are brighter and far less expensive.

To simplify the control system, DMX was discarded in favour DMX 1000, a proprietary feature of Illumination Physics’ control software IP Soft. Running 4 times faster, DMX 1000 is not restricted to 32 fixtures in a series. One universe of DMX 1000 can control 1000 RGB pixels and is auto-addressing.

Lastly, ‘L Pixel’ was designed with an on board power supply so that 230 volt AC power could be used. A single cable connected the pixels - carrying power and data - which greatly simplified the installation and allowed for entire floors to be served by only two circuits.

The ‘L Pixel’ is an example of problem solving and value engineering exhibited by Illumination Physics’ project design team and is available to all clients’ every day.