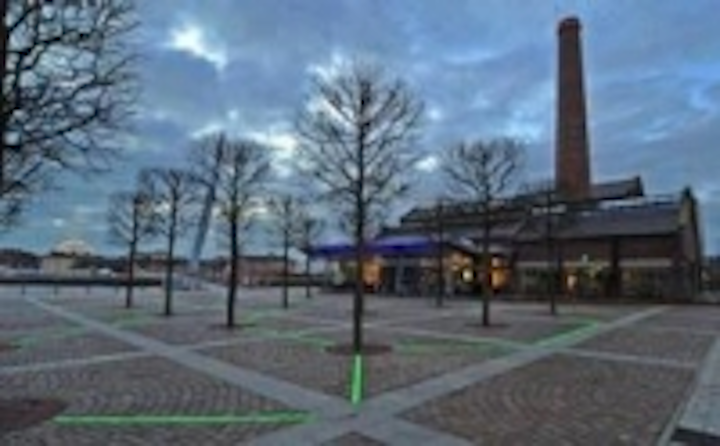 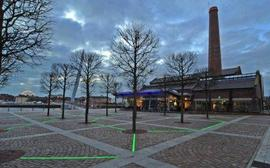 A multi-coloured interactive lighting scheme has just been switched on in SA1 Swansea Waterfront.

Imaginative LED lighting strips have been put in place around paving stones at Ice House Square in a grid pattern to help develop better links between the Prince of Wales Dock and the rest of the city centre.

Ice House Square is an important point of arrival for pedestrians and cyclists as the first area of public space in SA1 that visitors see from across the Sail Bridge.

Top international artist Peter Fink was commissioned to celebrate this with a dynamic and interactive lighting scheme as part of a public art strategy commissioned for SA1 by Swansea Council is partnership with the Welsh Government.

He won the commission after a national open call for submissions that attracted applications from overseas.

Mr Fink worked with Urban Projects Limited to put the scheme in place.

His design intersects the formal grid of the paving with lines of light flowing diagonally across the square in and around the trees in the area.

The scheme has been paid for by SA1 developers under contributions they make for artwork in the area.

Cllr Alan Robinson, Swansea Council’s Cabinet Member for Community Regeneration, said: “As the main pedestrian point of entry into SA1 from the city centre, it’s important that the Ice House Square is an impressive gateway that attracts people across the Sail Bridge.

“This interactive lighting scheme will transform the square by attracting more footfall and boosting businesses in the area.

“Schemes of this nature are intended to develop SA1’s standing as an innovative and dynamic waterfront destination that’s attractive for residents, visitors and potential investors.”

Peter Fink was born in London and brought up in the USA and Czechoslovakia where he graduated in engineering in 1968.

The lighting scheme on the Coronado Bridge in San Diego is among the projects he’s worked on in the past.