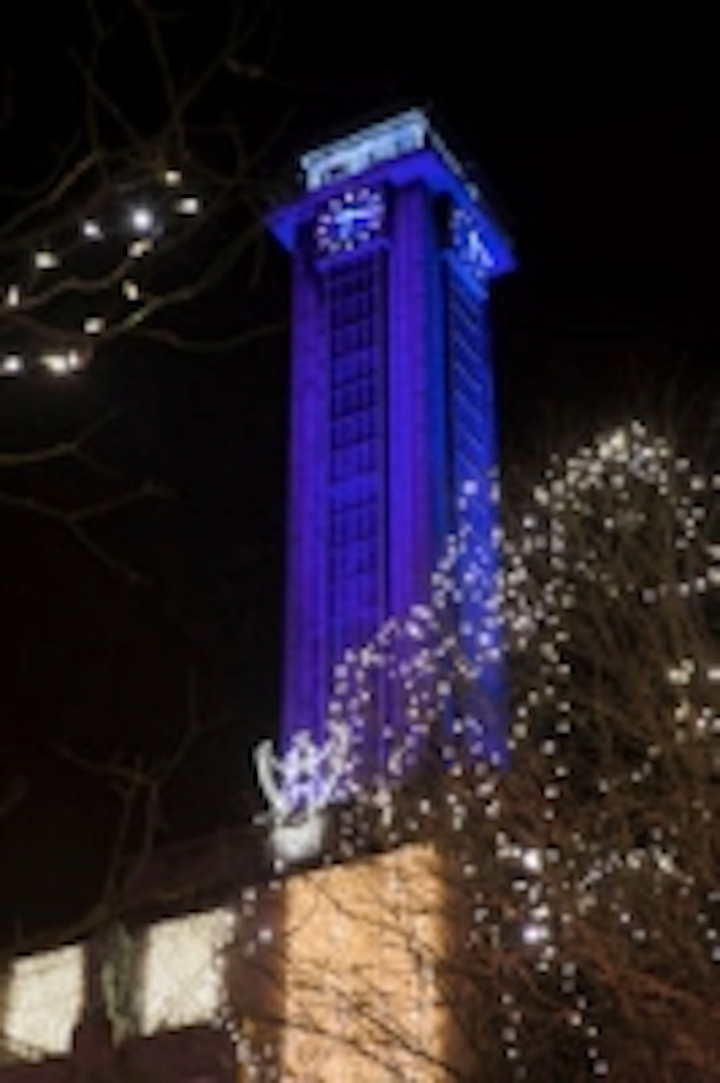 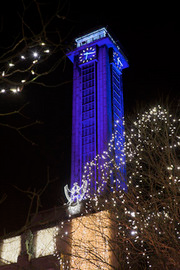 An energy saving Anolis LED lighting scheme designed by Petr Kolmačka has been installed to highlight the famous City Hall Tower in Ostrava, the third largest city in the Czech Republic and the administrative hub of the Moravian-Silesian region.

The city has a strong commercial heritage based on the heavy industries that grew up around its high quality black coal deposits, discovered in the late 18th century. More recently it has launched a big initiative to clean up the environment and control the many years of accumulated pollution, reinventing itself as the ‘City of Colours’, highlighting its equally rich history as a centre of innovation, creativity and education (as a major university city).

This, the city’s first civic lighting scheme is part of the process of helping to create a new cultural identity for Ostrava. Its numerous creative and entertainment based activities include a high profile annual arts festival and four leading theatres; it’s sporting achievements offer up famous football and ice hockey teams and in the current local government, there is plenty of imagination and inspirational thinking for the future.

Kolmačka, Anolis’ brand manager for the Czech and Slovak Republics, is based in the company’s HQ and factory 45 minutes drive away in Valasske Mezirici. He also studied in Ostrava for six years, has a real affinity with the City, and took a great pride in being asked to create and manage the Tower lighting project!

Ostrava City Hall in Masaryk Square is the largest such municipal building in the Czech Republic with the highest tower at 85.6 metres high, and was inaugurated in 1930.

The tower’s unique steel frame is clad in copper produced by the Vitkovice Iron & Mining Company, and weighs 155 tonnes. An observation deck at 73 metres offers commanding views of the city, and there is also a clock on each of the four fascias just below the viewing platform.

Visitors can either take the high speed 51 metre lift to the observation desk - the highest in the country when it was built ….. or the energetic can climb the 292 steps!

Kolmačka was approached about the project six months ahead of the actual installation. He proposed that the four fascias of the tower were each illuminated with a single Anolis RGBCW ArcPad Xtreme, one of the most powerful Anolis LED flood fixtures currently available.
So much so, that one ArcPad Xtreme is all that is needed to evenly light the entire surface area of each elevation – even given the challenging texture of the copper cladding for illumination! These are washed with a selection of beautiful colours, including the standard day-to-day selection which is a combination of eight cyan, blue and white scenes, based on the vibrant colours of Ostrava’s logo and other colours stipulated in the client’s specifications.

The City Hall also has the flexibility to change the colour of the Tower for special occasions like festivals and other public events.

The Anolis ArcPad Xtreme is a special outdoor fixture with two independent LED modules. The LEDs are densely populated, providing an extremely bright light output, and an IP 67 rating makes it ideal for exterior applications. The unique combination of RGB and white LEDs delivers a stunning quality of white light, rarely equaled in competitive products.

Secured around the top of the observation deck are 20 units of Anolis ArcLine Outdoor Optic 40MC (multi-chip), so the top can either be matched or contrasted in colour to the elevation of the Tower.

Two Anolis ArcPower 360 drivers power the LED units, which are controlled by a Cyber Cue system, pre-programmed with the sequences that change every 30 seconds.

The lighting is programmed to switch on at dusk and off at dawn, and runs right through the night.