MOCVD sales to hit bottom in first half of 2012 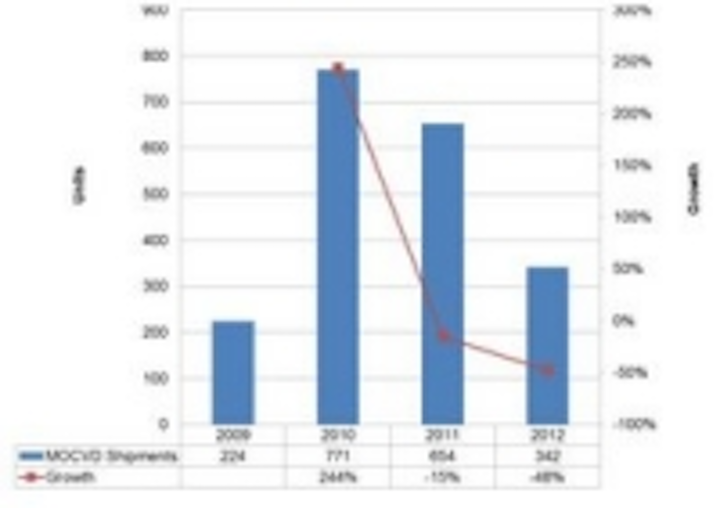 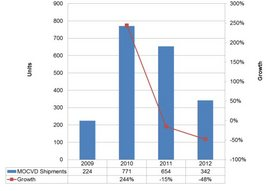 Wellingborough, UK –- IMS Research (recently acquired by IHS) forecasts 342 GaN LED MOCVD reactors will ship in 2012, a significant decline of 48% vs 654 in 2011, according to its most recent GaN LED Quarterly Supply and Demand report.

The first two quarters of 2012 are currently expected to experience the lowest shipment levels, with a modest recovery in the second half as companies begin adding capacity in response to expectations of rapid demand growth from the general lighting market in 2013 onwards.

The MOCVD market saw a large boom in 2009 and 2010 due to capacity needed for LED TVs and peaked in the second half of 2010. 2011 saw lower but healthy shipment levels as new Chinese manufacturers and Chinese-Taiwanese joint ventures entered the market backed by government subsidies for MOCVD reactors despite an oversupply in 2H’10.

With the oversupply expanding in 2011 and China’s MOCVD subsidies expiring in most regions, shipments and orders have since stalled. In addition to China’s supply-side subsidies, the over-supply rose on weaker than expected demand due to global macroeconomic weakness, slower than expected growth in LED TV penetration and the adoption of fewer LEDs per panel in many backlighting applications.

In addition, LED lighting is still a relatively small market. As a result, MOCVD order intake sharply declined in the second half of 2011 resulting in low expectations for 1H’12 MOCVD revenues.

IMS Research analyst Jamie Fox commented that, “We believe the market peaked in Q3’10 and Q4’10 with 239 and 238 GaN reactors shipments respectively. Almost every quarter since then has been a decline. For 2012, we expect the first three quarters combined to be about the same as just one of those peak quarters. Apart from China, the market is extremely quiet. Without the Chinese growth, the market would have almost completely collapsed.”

In Q4’11, shipments actually increased sequentially, as some big orders in China fell in the quarter, particularly for Aixtron, as mentioned in an earlier blog. However both our survey of customers’ purchase intentions, and the publically available information on Aixtron and Veeco’s order intake, clearly tell the story of a big decline expected in Q1’12, which will see shipments of around half of Q4’11.

Further highlights from this quarter’s edition of the report include:

- Elec-Tech heads the list for likely top customer of 2012.

- Despite a trend to 4 and 6 inch wafers globally at tier 1 manufacturers, 2 inch remains the majority due to China’s reliance on 2” wafers.