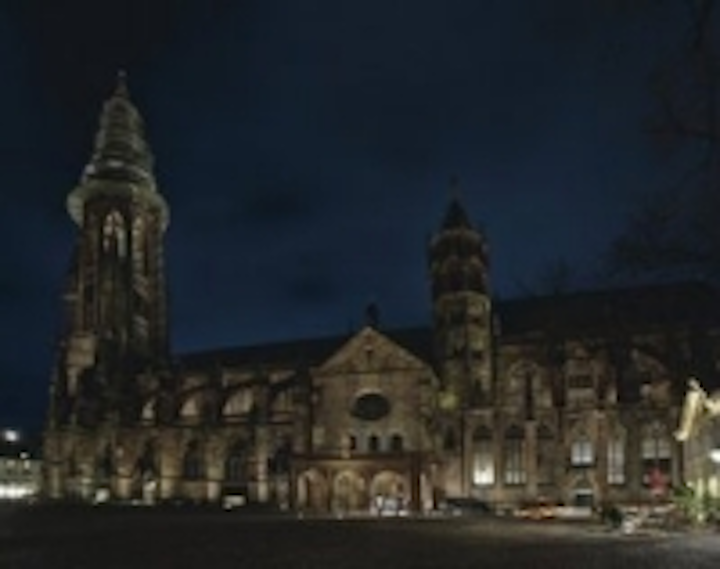 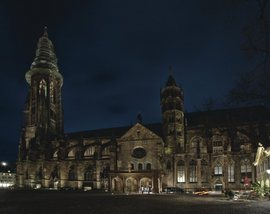 Villingen-Schwenningen -- The Freiburg cathedral is now aglow in a new light. Thanks to the German Department of Research and Education’s (BMBF) “Cities and Towns in a New Light” competition, German-made LED lighting illuminates Gothic cathedral architecture in Germany for the first time.

Freiburg was one of ten cities to win the competition’s prizes of two million euros. The lighting concept submitted by the city of Freiburg called for the first-ever deployment of in-ground and surface-mount LED luminaires to illuminate the medieval cathedral.

Customised products from Hess AG’s architectural lighting series were the choice. The jury was looking for a milestone project that would have a significant impact on the use of LED technology in Germany. Freiburg’s concept was exactly what they imagined.

Having a reputation as a green city, Freiburg has steadfastly pursued an ambitious environmental course for years. “Our rich past is also of immense value,” states Professor Dr. Martin Haag, city director of planning and development, while citing the reconstruction after 1945 of the historic old city and the attractive power of the city’s medieval flair, which draws over 12 million day tourists annually. Lighting designer Walter Bamberger’s assignment included the development of a lighting plan for the cathedral that would underscore the old city’s character. “People frequenting the plaza around the cathedral should say this is Freiburg, not London or New York,” is how Haag explains his objective, which he communicated to the lighting designer.

Bamberger sees the plaza around the cathedral “as one the few places in Germany where one should feel the darkness.” For this reason, he decided on warm white LEDs and low luminance levels. “The cathedral should have a very live Middle-Age presence for people sitting at the plaza’s south side drinking a glass of wine in the evening,” says Bamberger, explaining the atmospheric objective of the lighting that shrouds the Gothic structure at night.

Lighting design with a tactful touch

From his years of experience, Bamberger knows “working with less light is one of the greatest challenges for a lighting designer.” Add to the lighting designer’s list of project objectives the requirement for a sizeable degree of three-dimensionality and depth, as well as the predetermined points of installation for the fixtures that illuminate the towers and you have a formidable task on your hands. “Standard lighting solutions would be at their limits here,” states Bamberger. Hess AG’s LED lighting proved to be exceptionally versatile and modifiable.

Together with Lehner WerkMetall, a cooperation partner of the Hess Group, Hess modified optical systems, based on information obtained from computer simulations, added diffusers and light baffles, and adapted heat sinks, drivers and transformers. Colour filters adjust the light colour to match the cathedral’s century-old sandstone. “Thanks to the modifications, the lighting really brings out the character of the architecture,” Jürgen Lehner says.

Lehner tested the accent lighting system several times on site to evaluate its aesthetic quality. When necessary, Hess and Lehner incorporated the results in modifications performed at Lehner’s lighting laboratory prior to performance tests that took place at the laboratory in Bamberger’s engineering firm in Pfünz, which is near Eichstätt, Germany. Since facade textures, light colour, the atmospheric and three-dimensional effects of the lighting cannot be simulated in a laboratory, field testing was for Lehner “indispensible for achieving optimum results.”

In addition, the designers scaled the wattage of the light sources individually for the different reflector systems. Custom-designed diffusers provide wide, homogenous distribution of light parallel to the fixtures’ longitudinal axis. Light baffles are integrated into the reflectors’ surfaces in the in-ground luminaires.

“They virtually eliminate glare for people standing near the luminaires, so that it’s possible to walk around the cathedral without the slightest trace of visual discomfort,” says Lehner. Teramo luminaires illuminate the outer walls of the nave and clerestory from the roofs of the aisles and quire. And completing the installation, four smaller, square in-ground luminaires bathe three columns at the front of the cathedral in light.

Eighteen high-efficiency high-intensity LED floodlights fit with custom aluminium optics uniformly illuminate the 116-metre high steeple with a beam angle of 1.5 degrees, giving the tower an extremely attractive appearance from the distance. Another 16 floodlights light the twin “Hahnen” towers. “The LED system used to illuminate the towers and steeple is a new modular system that permits multiple LED configurations in a single luminaire housing. The extremely narrow beam angle enables the precise collimation of the light for much higher efficiency,” says Lehner, explaining the advantages of the system. The luminaires are mounted on the cathedral’s roof and adjacent buildings. For added effect, Teramo in-ground luminaires contribute to the steeple’s illumination, accenting its character and making its third dimension present.

Just how efficient the new LED lighting is, becomes apparent upon examining the steeple lighting, which conventional lamps provided in the past. Whereas with the conventional light sources 1,110 watts were required, now, only 400 watts are necessary. This corresponds closely with the experience of lighting designer Bamberger and the specialists at Hess AG. Lehner sums it up in a few words: “If used efficiently, LED systems provide savings of 50 percent over conventional sources. However, the optical systems must be precision-engineered and perfectly installed.” With the new lighting, only 3,850 watts are required for the illumination of the entire cathedral, including the steeple, towers, columns and portals. In addition to their superb energy efficiency, the 110 LED luminaires installed around the cathedral operate with minimum glare and negligible upward stray emission. The lighting designer attached great importance to positioning the luminaires, which are very compact anyway, so they in no way would infringe on the cultural monument’s unique character during the day.

Further LED projects are in store for Freiburg

Other innovative projects throughout the city are to follow. In addition to the city gates and other architectural highlights, the city plans to convert standard applications, such as function-oriented street lighting, to LED technology. And certain city sections are targeted for bi-functional LED street and pathway lighting that includes accent and perhaps even effect applications. Also in store for Freiburg’s future are products combining LED and solar technologies, with solar-powered LED lighting soon to illuminate the banks of the Dreisam River.

The gentle illumination of the Freiburg cathedral with very warm white LEDs preserves the highly valued mystical atmosphere of the plaza for the enjoyment of tourists and residents.