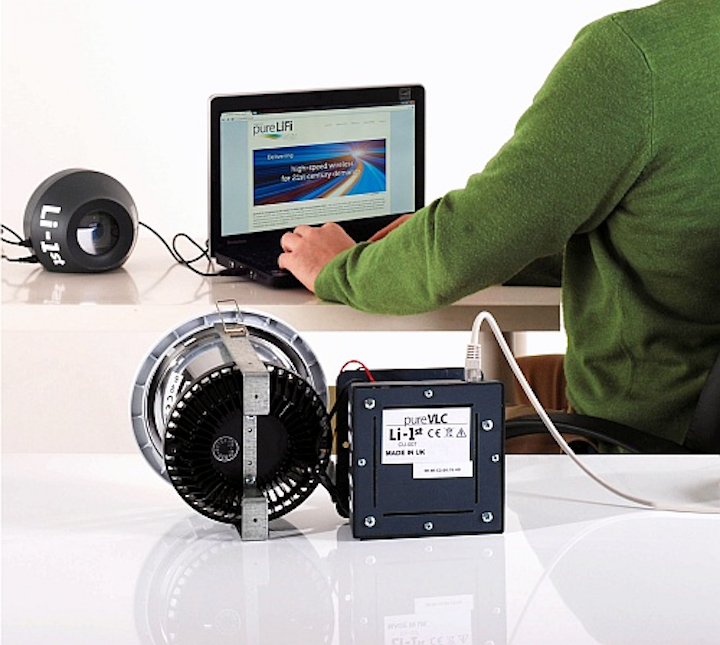 EDINBURGH, Scotland--Harald Haas, Professor at the University of Edinburgh and Chief Science Officer (CSO) and co-founder of pureLiFi, and his team have made another breakthrough in Li-Fi by demonstrating that up to 1.1 gigabit per second (Gbps) can now be transmitted using light waves from micro LEDs over a distance of 10 metres using less than 0.5W power. This is only 5% of the power of a typical 10W LED light bulb. This proves the point that lights can be dimmed down while high data rates and coverage are maintained. Moreover, the distance at which 1 Gbps can be achieved with a single colour LED is 10 times larger than what has been reported previously. 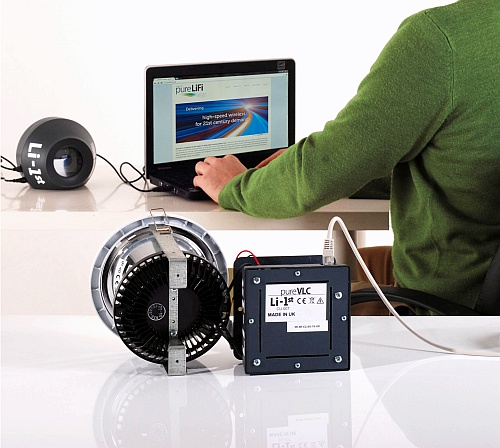 The latest discovery follows the successful demonstration by pureLiFi of the world’s first commercial Li-Fi product, Li-1st , during March at MWC 2014 and CeBIT 2014. pureLiFi added a second production run of the Li-1st during March to meet the high demand from industry customers worldwide. This new production run is being shipped this month.

Professor Harald Haas, CSO and co-founder of pureLiFi, said:
“Li-Fi is revolutionising wireless communications and showing that Li-Fi can be the enabler of the emerging Internet of Everything. By transmitting data at speeds above 1 Gbps and record distances of 10 metres at a fraction of the power of typical LED bulbs, we continue to make the technological leaps and bounds that make Li-Fi a technology that could transform the way we use the internet in the near future.”

About pureLiFi and the Li-Fi industry

1. Visible Light Communication (VLC) is the use of light to transmit data wirelessly. Li-Fi -- a term coined by pureLiFi’s CSO, Professor Haas -- is a technology based on VLC that provides full networking capabilities similar to Wi-Fi, but with significantly greater spatial reuse of bandwidth. pureLiFi is at the forefront of research and commercialisation into Li-Fi, an industry expected to grow to over $6 billion by 2018.

2. pureLiFi (formerly known as pureVLC) is a light communications technology company formed in 2012 as a spin-out from the University of Edinburgh to create OEM components, including Li-Fi drivers and receivers.

4. EPSRC is the main UK government agency for funding research and training in engineering and the physical sciences, investing more than GBP800 million a year in a broad range of subjects including information technology and structural engineering.