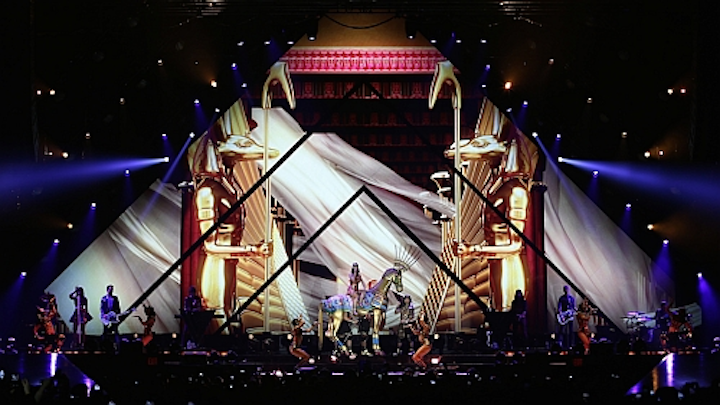 London and New York, NY -- Having completed the first European leg of her Prismatic World Tour and now starting dates throughout North America, Katy Perry invites her audiences into a visually stunning concert experience. "Everything with Katy is larger than life so the design needed to reflect that. The stage itself is a statement," points out Show Director and Designer Baz Halpin. Helping Halpin and Perry make that strong visual statement is PRG Nocturne. 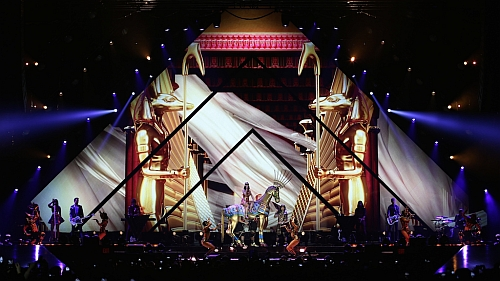 Supporting her album, Prism and calling the tour the Prismatic World Tour, Perry had a vision of where to start in the look of the show's design. "She wanted a large triangular LED Video screen on a triangular stage," explains Halpin. "That was the basis of the design -- the shape. Everything else plays into that." Halpin conceived the enormous 70' wide by 34' tall automated tracking triangular LED video screen that is, as he says, "the backbone of the show; it's used in everything but the unplugged section of the performance. The main challenge was to make sure that the screen wasn't too overbearing. We spent a lot of time making sure that it wasn't going to overpower the action onstage."

To realize Halpin's dynamic creative design and offer a reliable, globally tourable solution to the challenging element, he turned to PRG Nocturne. "We needed a very experienced crew and an experienced vendor, which obviously PRG Nocturne have that pedigree. They have the experience of dealing with huge shows like this that have to be transported on a daily basis and work every time. It is very important to have their experienced crew and their support to carry that out, which PRG Nocturne does."

The LED prism-shaped video backdrop, used as both a scenic and dynamic lighting solution throughout the evening as well as for cutting in I-MAG camera shots at times, is actually three separate pyramid-shaped screens comprised of over 700 PRG Nocturne V-9 Lite LED Video Modules. The hi-resolution V-9 Lite product offers a lighter weight LED screen option without compromising image quality. Cutting weight was important, not only to better address touring needs but because of the scale of the LED screen Halpin wanted on the stage. Even with the V-9 Lite it weighs in at 40,000lbs.

"Because the V-9 Lite is so lightweight it's an ideal solution for touring, certainly it was the right solution for this production," explains Mark O'Herlihy, PRG Nocturne's UK Head of Video Services. "Beyond the weight considerations it also still delivers an equally high quality, high-definition picture, which is always important when you have such a strong visual element with such rich content."

PRG Nocturne is also supplying the Prismatic World Tour with several other LED video elements including their V-9 LED Modules for a rising pyramid Perry enters through at the top of the show, and flexible digiLED LED product that wraps around a huge multi-layered birthday cake set piece. For playback control and to allow truly creative flexibility the tour's Video Director Omar Montes-Rangel, from PRG Nocturne, is using two PRG Mbox media servers. PRG Nocturne crew on the tour also includes video engineer Eugene McAuliffe, the video crew chief John Moore as well as the LED screen technicians, the camera operators and projectionist.

The PRG Nocturne UK is going to have a busy summer supporting artists including The Rolling Stones, Linkin Park, and Metallica for their European tours. Katy Perry's Prismatic World Tour will continue to play North American dates through October. She heads to Australia and New Zealand for November and December before returning for a second European leg, ending the tour in late March, 2015.